I recently started another thread http://blenderartists.org/forum/showthread.php?t=83494 to get some critique in the “Works in Progress” section. It’s full of flattering comments which is very reassuring, but I’m putting a demo reel together and this model is more or less a centerpiece. I’ve spent a while working on him, but he isn’t finished just yet. The remaining work is basically to put some colour texture onto the hat and fix the texture seams on the tentacles. I might make up a reflection/specular map for the eyes although I’m pretty happy with how they came out.

And of course, any general hints would be very much appreciated. While I think of it, its a 3 point spotlight setup using Blender’s Internal Renderer, intentionally lit evenly to show off the entire model, not just focus on the eyes or anything.

Attached is a current render, http://www.filefactory.com/file/4dd004 is where I’m hosting a 1.6MB rendered turnaround Mpg. If the vid doesn’t work, please say so. 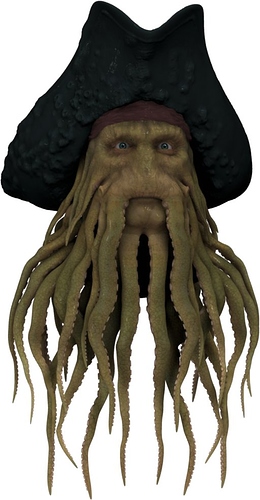 I ike it…cant believe no one has posted here yet.Anywayz 5 stars from me!

As far as number 2 goes, I don’t know about ‘gooey-er’, but I would say make him look a little wetter. I asked in the WIP thread but I might as well ask again - Are you going to school for this, or already working professionally or something? (Can’t think of another reason to make a demo reel…) Just curious. Anyway, awesome work! It’s really hard to find something to critique…

[Edit] Could you put up a wire frame?

Ring Junkie: Sorry I didn’t answer earlier. Long story short I went to an art school that offered “New Media”, which is the generic term for anything with computers. I learnt a bit of 3D there, Max, Maya etc. but most of my learning was using Blender at home, experimenting, doing tutorials etc etc. Now I’m finished my degree and getting ready to apply for some work about the place.

Attached are some various renders with some different settings. I think ‘wetter’ might be the way to go. Ring Junkie, did you mainly mean raise the specularity? I’ll give that a go.

Wireframe might be a little interesting to do, its been in and out of Sharp Construct and all the pieces add up to 4.6 million polys or so. Will give it a go and see if it’s clear enough to post. 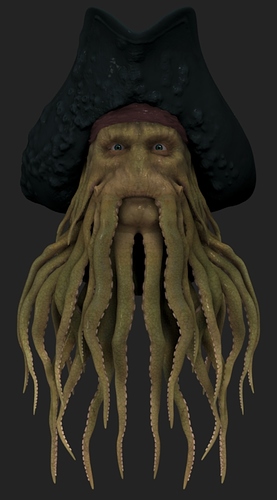 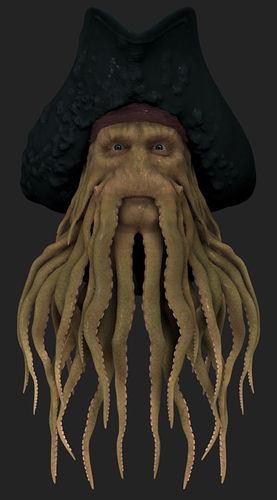 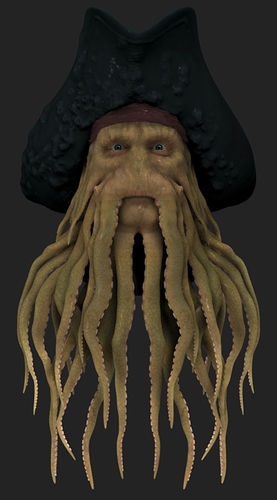 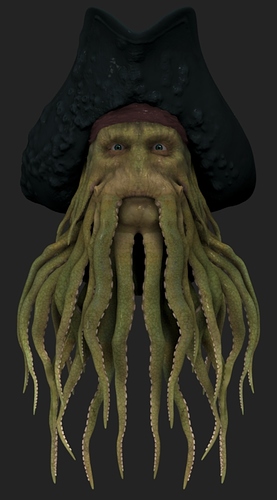 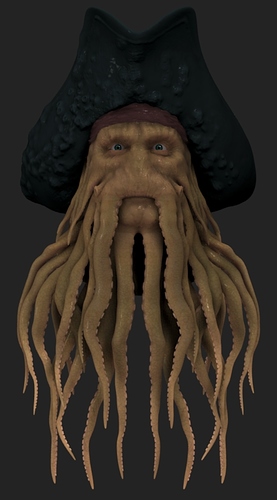 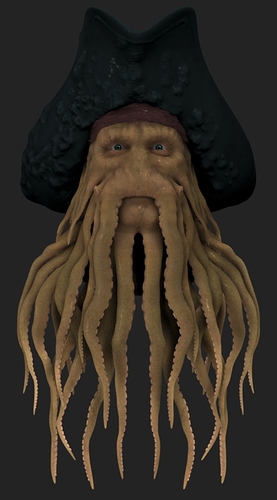 The wireframe is of the meshes before they went into SC. It’s modelled symmetrically (mirror) and the tentacles were separated before I put the head into SC to save on memory. 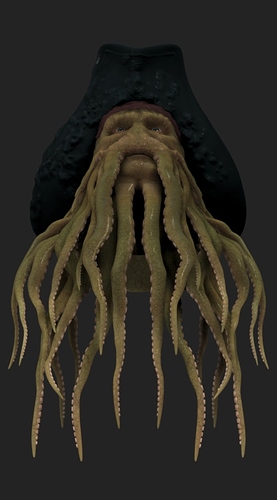 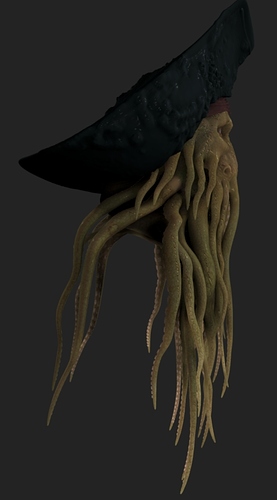 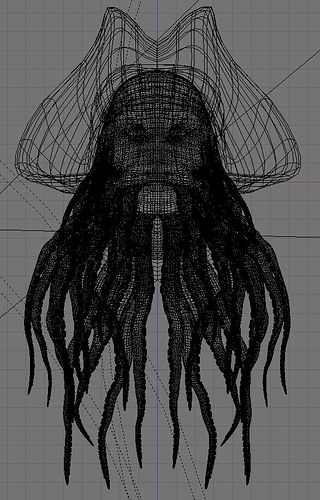 very nice work.
of the six that you showed, I prefer the middle bottom one. It combines the gray and green and pink well.
Your modeling is top notch, no problems there. I think a bit more sqishyness would be good though, rather than hardness and shinyness. The movement in the move contributed a lot to the feel of the character, but to capture him in still you will have to accentuate his wrigglingyness. Yes, I make up words. I think that maybe a movie with the camera rotating around this would help see the light flow through the tentacles and really make them pop.

other than that, I really can’t find anything to crit, other than its obvious lack of doneness
(no body, symmetrical).

Crustyness, too, the bumps should be more pronounced. Maybe it’s just the sss-lighting, but his skin looks too flat.

The texture line on the tentacles below the chin really take away from the whole head. Great work though,

Yet, the overall color feels very wrong. I see you tried to make it pinkier, but it turned out more
dark orange or brown like. Make it lighter - more skin toned.

Keep it up! Fantastic!
//Mathias

Unstable - I plan to put together a document that details a bit of how I did it, what I learnt not to do and so on. Not a step by step “Make your own Davy”, more of an overview. Dont anyone expect it before Christmas though, I’m going away soon and I plan to finish the model before I go. Thanks again all for the comments, another update too. Still fiddling with overall colour/reflection/etc settings before I finish up the texture seams.

whoahhhhhhhhhhh looks alike the one in the movie nice work man!

This is a post from the first thread I started, someone might ask these questions here as well.

Are you going to make the rest of the body?

I aim to leave him as a bust. Recreating the rest of him would be a fun challenge, but I’d rather put all that effort either in to a character of my own imagination or otherwise into a paid piece of work. (Any offers? :)) I’ve already got a few ideas for said ‘own character’, will definately post him/her from start to finish, maybe even knock up a tutorial as I go. Major condition for whether I’d do a tut or not is that there is already a lot of good ones out there for humanoids, so it would have to be for specific ‘unique bits’ like tentacles/odd hair/wings/armoured clothing etc etc. I’m pretty keen to sow some resources back into this forum community, it’s indirectly how I learnt much of what I know in 3D.

How are you getting over 4.5 million polys / what hardware have you got?

Ummm… basically I upped my RAM from 512mb to 2 gig. I’d been meaning to buy a bit more memory recently, where I live it’s now around $89AUS for a 512 mb stick. (You can do your respective local math.) I know thats not quite ‘lying around money’, especially for students, but it’s definately been worth it. Processor is about 2 years old, a Pentium4 3.2GHz I think. Good solid stuff, but not a dual or quad core (drools). RAM seemed to do wonders on it’s own though for simply holding more polys total. However, I will add that the model’s main parts are split into the hat. two sets of tentacles and the face. The face and hat were exported separately into SC for detailing and re-imported back in. There seemed to be a limit on what the UV mapper could handle, as well as the .obj importer, which is fair enough really - I was asking a lot of them. I didn’t use sculpt tools (although I did try them out) in blender because without boring detail, Blender and SC handle rendering different for realtime editing and in the end, Sharp Construct could handle more of a thrashing before crashing.

Also, final note - I now have a dual boot system with Windows and Linux. Windows can’t hack it anymore, the model wont render out. Linux manages memory better and low and behold, will render it out. Yay Linux!

Damn, yesterday when I replied I didn’t pay attention to your need of constructive criticism.

As others have pointed out, the skin still looks a bit too dry for an octopus-like creature. Octopi lose their slimy look when they’re photographed underwater but when brought to direct sunlight, they look all slimey and gooey.

The slime looks almost like an extra oily skin layer on top of the actual one.

And oh, I really want to thank you for bringing up those three tutorials. I’m creating my first character at the moment with quite the same workflow as you (using SC also) and even though I’m still working on the actual head, I’m about to move to the eyes and materials soon. Those links will help me a lot, thanks!

Front and side view after many little experiments with colour amount/ reflection etc. Seams still dont match so please dont mention yet, although thats my next planned step. As for the front view, it looks pretty ‘green’, but side view I’m really happy with. This is a lighting thing as the front view is intentionally fully lit for viewing purposes. I’ll fiddle with that in the final render pass when I do the end turnaround. (I rotated the lights around for the other two front on renders.) There is also a new midget 30 frame 550kb movie if anyone wants to see the camera move about his face and upper tentacles a little. 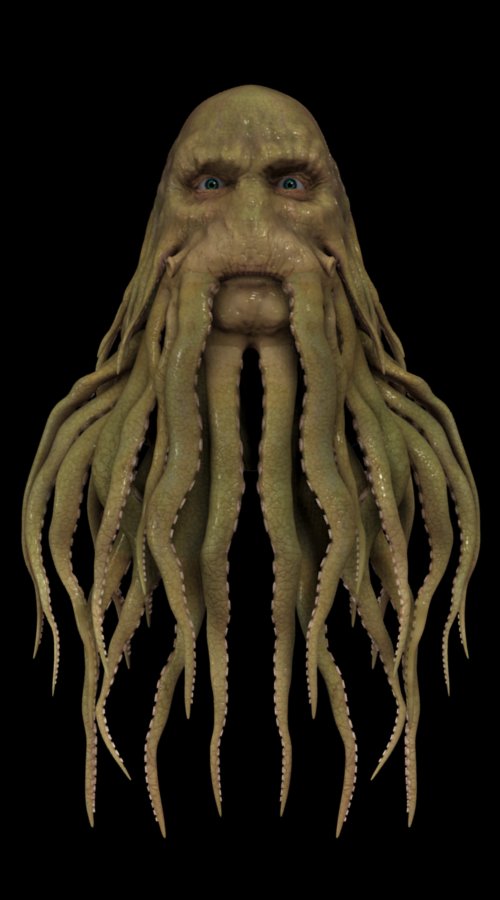 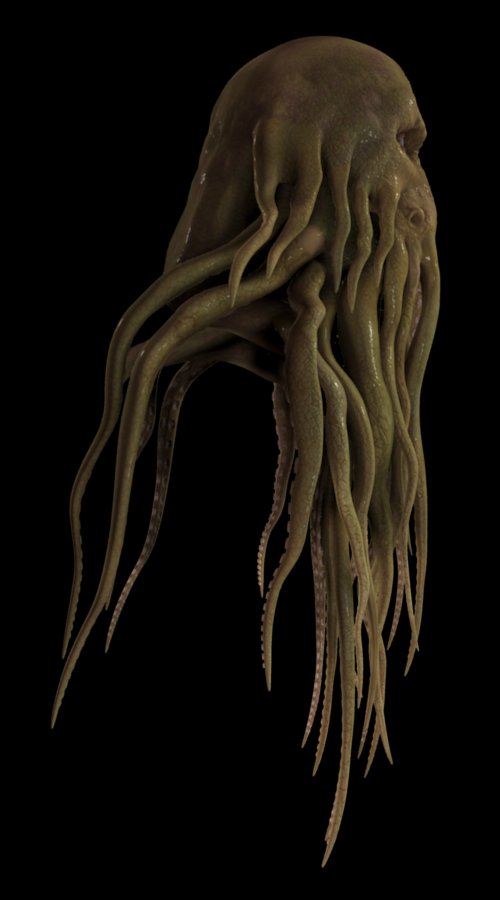 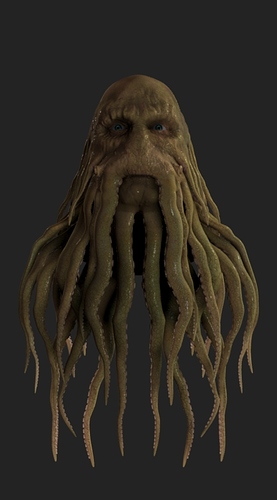 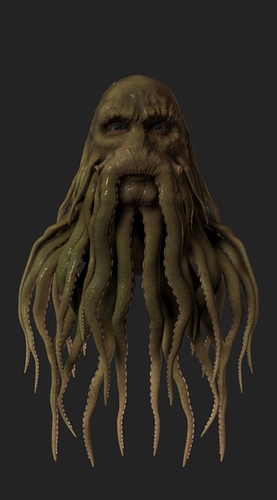 Are you gonna make the tenticles more random on each side after you join it?

I know you used mirror to model it but the one thing that poped out at me is the symmetry of the two sides. over all I love the model and I hope to see more.

Sorry if this is an obvious question.

Still feels too green. Remember that it looks very green in the movies partly due to lighting.
Check daylight images of him. As I recall at least, he is much more skin colored.

I agree with Enriq about the tentacles. They should be a bit more randomly arranged.
But other than that, I think this is one of the coolest Blender projects I’ve seen. Keep up the good work.

very cool. all i have to critique so far is what enriq766 said.

How about the node setup? I am very curious.