Here are some test I made of the DSM build. I had 170 000 hairs on my original head. I lowered this to about 50 000 and did a very rough comb I was a bit eager to test this out and it was bombing out with the original number of hairs I had.

I have three lights in my scene all spots with shadow buffer of 512 and a bias of 0.2 the only difference was I set one group of lights to classic of the shadow buffer and the others at deep.

the lights behave differently in terms of the saturations I get out of my renders.

you can read up more on DSM and find a link to a build by visiting this thread: http://blenderartists.org/forum/showthread.php?t=142797

feel free to post any test you conduct into this thread I would love to see what other users come up with, my next test is to see how this handles transparent shadows something regular shadow buffers can’t do. 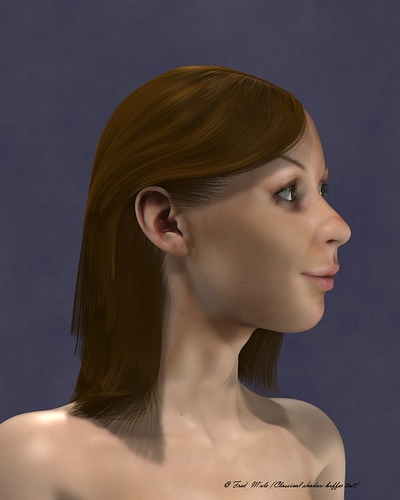 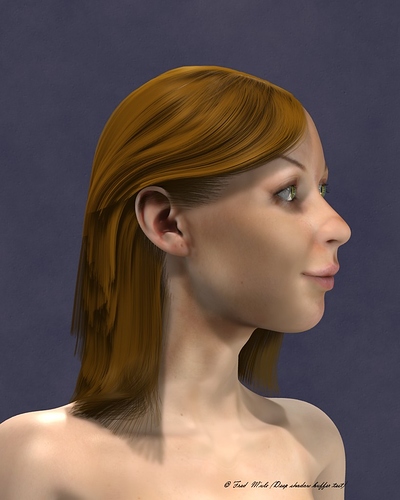 Interesting. The DSM one is better, but it’s quite long to render.
When you’ll have the time, could you test the same scene with Ray shadows?

In terms of finish I lean towards the DSM render, though not been able to work with the same number of strands as I orignally did and not been able to build duplivert arrays with my spots, something I always do, is a bit of a let down. 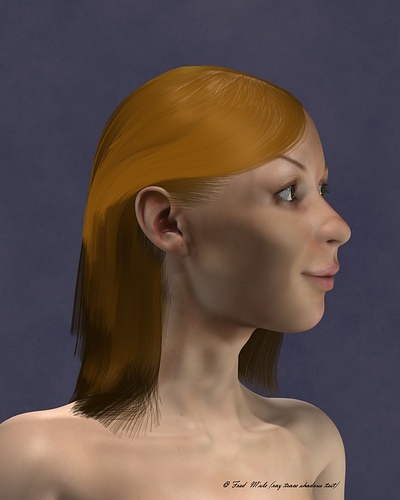 Yeah DSM fits into its own niche in the lighting toolset. It’s for strands and volumetrics, really, and because of its speed it doesn’t seem too useful if you use more then 2 or 3 lamps with it (though my code does support multithreading).

Also I’ve not yet gotten soft shadows to work with DSM; once I get something working there it’ll hopefully be more useful on its own.

I think using DSM spots as only shadow lamps to shadow specific things that need it (hair, whatever) might be a good idea, though that’s being buggy at the moment, need to fix it.

thanks for the info Broken, I light mostly with buffer shadows so I was not fully aware that strand renderer doesn’t work with ray tracing, I was taken aback with the lack of self shadowing but didn’t have a clue as to what was wrong, I will post another render when I get the time.

thanks for the info Broken, I light mostly with buffer shadows so I was not fully aware that strand renderer doesn’t work with ray tracing, I was taken aback with the lack of self shadowing but didn’t have a clue as to what was wrong, I will post another render when I get the time.

You can also try the Irregular shadow buffer option, it basically does the same thing as ray tracing (only iirc it doesn’t support transparency properly, or something like that). Not sure if it’s worth it or not.

I will recheck the number of hairs again, but the render time could be due to my sucky laptop, its celeron, that I work on. I don’t animate so as long as renders are coming out in decent amount of time I am not too worried but than my render times were not too extraordinary some other users in the blending life contest reported times way longer than mine.

P.S Doh! it seems the old brain has gone on vacation I had 1000 parent hairs and 170 child hairs giving my a grand total of 170 000 hairs. I cut this down to about 50 000 hairs to get a render out of the DSM. Reading what renderdemon has written it seems that a large amount of hair and DSM don’t go together. What would be interesting would be if someone render the chinchilla from BBB. I have a copy of the blend that was given away with the 3D world issue 106 but with my current hardware limitations I won’t attempt anything cause following that tutorial I ended up with a character with about 250K of hair particle and this is a cut down version of what was used in the movie.

I don’t even know what deep shadow maps are. There were no links for info in the build on graphical.