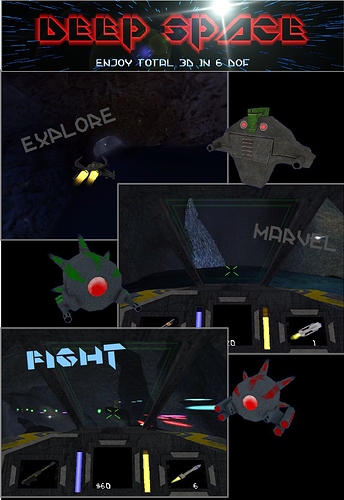 Driving a car is 2D
Flying a plane is 2.5D
Playing DEEP Space is true 3D

Ever flown in no gravity, where up is relative?
How about all that inside a cavern or large building?
Now’s your chance to experience combat in full 6DOF in a style similar to the Descent series.

DEEP Space has been in production long enough, and here is v0.1.3, bringing with it new levels, a high-scores system, and key/mouse/joystick mapper.
Yeah, that’s right, you can set your control config from the game itself!

Currently I’ve only got the blends and Linux Executable because I don’t have a windows PC, but here they are:
Blend (2.65)
Linux Executable (tested on Ubuntu 10.04)
If someone wants to export a windows or mac version and either email it to me, or post a link to it, then I would be most appreciative.

I’m working on the first two, and hopefully will have a patch out by the end of the week.

Nice, game:) If you go into the controller options, then motion, click on mouse, and then click on one of the other two options it won’t let you click on mouse again, and there’s also no mouse cursor in the controller options menu. I really like how this is coming along, and you menu’s are great, did you use BGUI? Also for me the default sensitivity is really really low, its set to 6 but feels really slow.

I’ve tried to find that bug, but couldn’t. Can you expand on it?

I’ve released a patch for the mouse in the controller menus. Just download the patch from this link, and put it in the main folder of your game, and it will extract itself to the right place when you next play through.

BGUI was not used at all in this game. All of the menu’s I coded myself, though if I did it again, I’d use BGUI.

The mouse’s apparently low sensitivity isn’t the sensitivity, but rather the ships maximum turn speed.
Most modern FPS’s you can spin as fast as you like, but in a space-ship, this doesn’t make sense. To turn ‘faster’ you can try sliding while you turn or moving the mouse slower, so you can move it further before you have to ‘re-take.’

The patch fixed the mouse, but now the game crashes blender on a couple of levels. Specifically, a couple of seconds after the Caves level starts, a couple of seconds after the Asteroid Base starts, and after going through all the hoops in military training, but that last one is probably just because that level is still WIP. Also thinking about it now, the other two crashes could just be that 'Triangle mesh, and rays" bug in 2.66, I’ll let you know if they still crash, after i update to a fixed version of blender:). Also I know i said this already, but I really like the way you did your main menu:).

Yeah, the game isn’t playable in 2.66 unless you’ve got a new build.