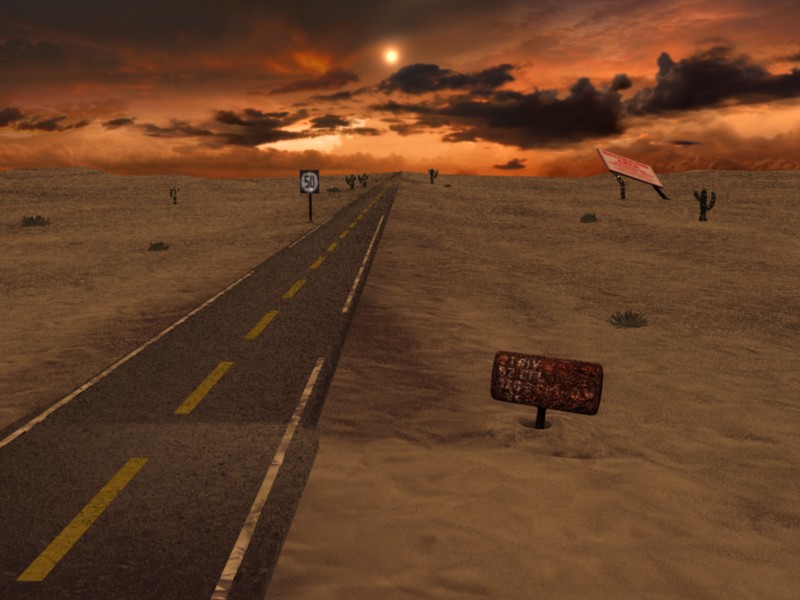 Heh. Being a begnner rarely does anything. They usually throw it on you in big coconuts. I come from experience. Either way, very good looking scene. You’ve made good use of textures, but the sky is a little unfitting for a 3d scene. Good Luck! (I see you joined 4 months before me. :mad: but with 39 posts whereeas I joined 4 months after you with 650+ posts.

That texture there wouldn’t work, use a greyscale version to displace the sand and a small grain texture for the sand itself.

Subdivide your plane to get it ready for displacement, subsurf, and use the displacement modifier and delete the faces under the road so the tops of the ripples don’t show on top of the road.

Then subdivide more near the camera, (you might want to keep a copy of the mesh before doing that so you’d have it untampered if you change camera angle)

i look at that image and i imagine a guy with a shotgun blowin peoples heads off in a game. anyone else see that?

I like the mood you set with it. the road looks very narrow like the cars would be clown cars. Also I think it is the texture you are using but the road is lighter in front then there is a clear horizontal line and it gets darker, also looks like it does that towards the horizon. You may be able to scale up the texture space to fix that. I think the shortcut is t + something. Pretty good for a beginner.