heres a desk scene I made. enjoy! 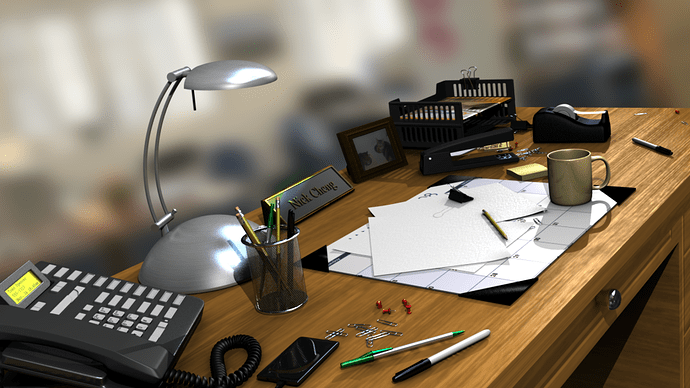 Well you obviously spent a fair amount of time on this image. My congrats to you.
Very nice!!! Superb image.
To improve i think, if i can crit…
…Background is too blurred, too much spec on the lamp, sticky tape too ‘straight’, the picture in the frame could be more evident, maybe a little too much bump on the paper.
Thats my 2 cents.
Once again, well done!

great modeling exercise, it seems it lack AO, if not you can add it to have more realistic illumination.

Just started gettin stuck into blender and soon I will be able to start a scene like this one because I’ve just about modelled everything to hand on my desk. Im lazy you see and its as good a place to start as any. Nice One.

wow, excellent, where did you get the wood texture?

there’s a lot of good textures here http://www.cgtextures.com/
i just got a photo and applied it to color and a bit of norm
and i made sure a light was reflecting off it into the camera to bring out the specularity and the bumps

very good,
what you did on the Desk give it more feel
it like that some was working there. i think you need to tweak more.

Well you obviously spent a fair amount of time on this image.
…Background is too blurred, too much spec on the lamp, sticky tape too ‘straight’, the picture in the frame could be more evident, maybe a little too much bump on the paper.

What he said, and the paper might be slightly too shiny. Also, there are two thumb tacks that are standing on end, while the rest just seem thrown there. If you think about it, tacks don’t just stand up by themselves. The guy could have been messing with them or something, but, yeah, it just seems slightly out of place to me.

The only serious problem, or anywhere near serious, is that the black paper holder thingy is missing one side. Maybe under the paper?

Very nice job, and as you may notice, I’m much better at critique than at making the models myself.