I have a slight problem with this low poly cape for my character. The cape is two-sided and I’ve applied a cloth modifier to the model (character and cape = same obj) and pinned all vertices except for the lower half of the cape.
The problem is that when the cape sways, the verts of the opposite side goes through the cape… Is there a way to prevent this from happening, or do I have to give up on using the cloth modifier?

I just had this idea that mayyybe I could separate the two sides of the cape with tiny tiny bones keeping them apart, but I’m not really sure how I’d do that, what do you think? 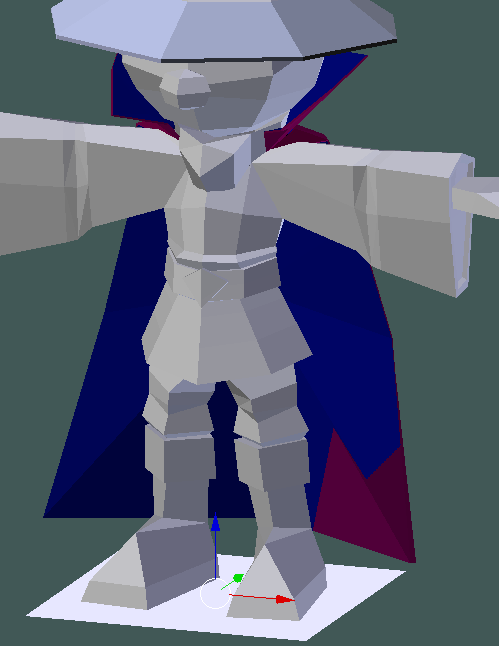 You could make the cape single sided with a vertex group for the whole cape. The verts near the neck of the cape (and the whole body) should be pinned. Also the neck of cape should be weighted for the armature. The rest of the cape should not be weighted for the armatures. After the cloth sim you can solidify the cape. The stack should be:
Armature
Subsurf (1/1 or 2/2)
Cloth
Solidify (cape only)

thanks! I’ll see what I can do.

for some reason, even though I specify a vertex group that covers only the cape and choose a material index for the “generated faces” a large part of the character (which is not covered by said vertex group) gets this material applied to it, except for a few faces here and there… the cape does not get this material at all, only the new thickness.