I’m here with a configuration set for Blender

It contains a set of themes, add-ons and key configurations for
ones who wants to start using blender.

I’ve made this (actually collect and fix it)
because I felt so difficult when I start using blender (about 2 years ago).
So I start creating an ideal User Interface for myself; An Interface which won’t be difficult to use and be easy and more compatible with most 3D Programs like Unity 3D or Maya and on the other hand,
keep its own shape and functionality to end the best result.

Many old or professional blender users may not agree with me:(
but actually it haven’t been made for those who used to the old UI.

However, if you’re an old user and want to taste it,
there is a manual in it so you can find out what has been changed and why.

By the way there is no license for it (Actually Public Domain), however the add-ons and themes in it DO have License!:yes:

I know it has a lot of problems and defects.:o
So I demand you to use it, rate it and help me improve it. Thanks

While it is a nice idea, you can’t really expect people to dump all those folders into their working install and hope for the best? You don’t even have a screenshot posted of what this “ideal” setup would look like. The AddOn scripts are scripts I personally never use.

My guess is you are coming from another 3D package and want Blender to work like the other product. The fact that you can alter Blender to approximate other software setups shows how flexible it really is. However, as a genuine Blender user I don’t see any reason to alter the default way it works. Especially for new users who are looking to tutorials to guide them. Running a non-default Blender means that posted tutorials and video won’t be as clear. Following along may be problematic.

Well, Thanks for sharing your idea
(However it was a little direct and I didn’t expect that)

Some things I want to tell you though:

First, The Ideal word is just a name I’ve chosen for it and I didn’t mean it’s really “ideal”(It is not even an adjective for it!)

Second, I was sure I’ve said make a backup of your config directory so after testing it, you wouldn’t miss your old setup
(as it’s obvious you can’t have both presets at the same time)

Third, This set is just the default blender preset, which I tried to make more efficient (as I said) and there is some small changes
in it(for example changing the MMB function with LMB which I personally think that new function is more logical at least in the beginner’s level) actually I “add” some functions to it which I don’t think it makes beginners confused (almost all of my changes had a reason an I’ve put them in the Manual)

Fourth, Blender was my first 3D software I used (except 3D Games!) and I felt a hole in myself which when I work a little with other 3D softwares like Unity 3D I found it easier to work in 3D space in some little points (Navigation for example) so I tried to adapt from them.

Fifth, This is a matter of opinion, however it haven’t been changed so much that you couldn’t recognize and be confused by tutorials (actually as I said I add some functions, which are not too much but I think they can ease your workflow a little)

Sixth, I never have forced anybody to use this and it’s better to say it’s an idea. I never say that the blender default preset is so bad or is not great; I just say that the people who wants to start blender, may feel a little more comfortable with it.
and I don’t thing testing it would harm anybody;)

Seventh, I didn’t see the screenshot so necessary as the major changes are in the functionality not in the appearance (it just seems that I’ve put a theme for it)
but for sure here you are: 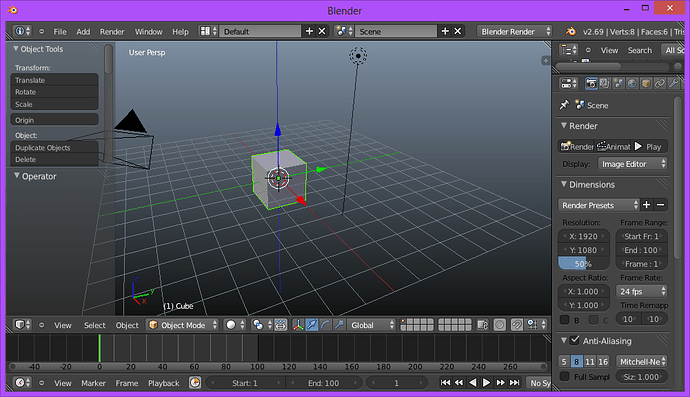 At the end, please excuse me to be a little offensive :o and don’t take it so serious!

No problem. I don’t take offense and I don’t mean to discourage. I have often thought that certain changes to the released default BLEND were in order. For instance, I make certain changes to my system when I upgrade to each new version.