Here’s a dragon I’m working on; I’m only planning on doing the head and part of the neck, since I only had a specific render planned for it, and don’t really have time to model the whole body. Critiques are welcome. 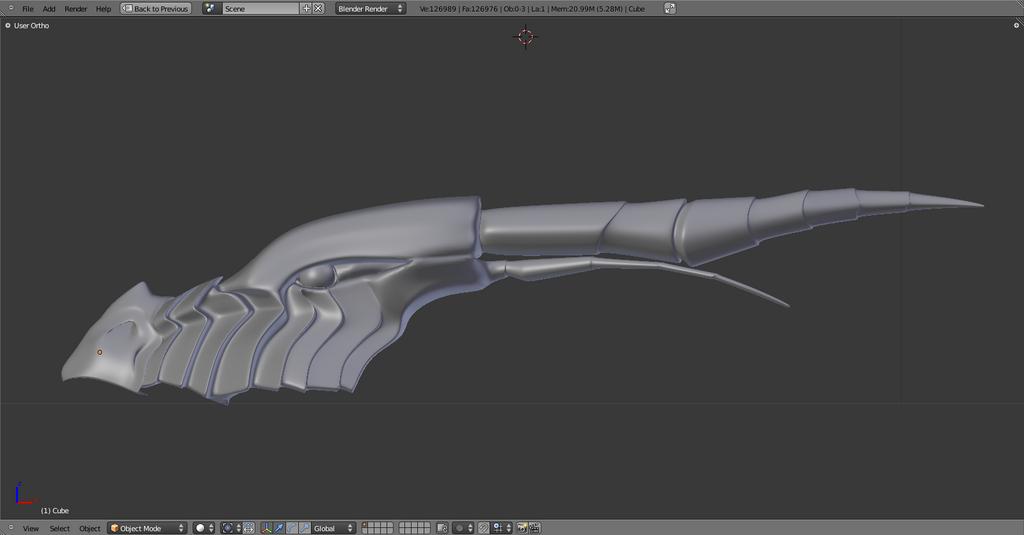 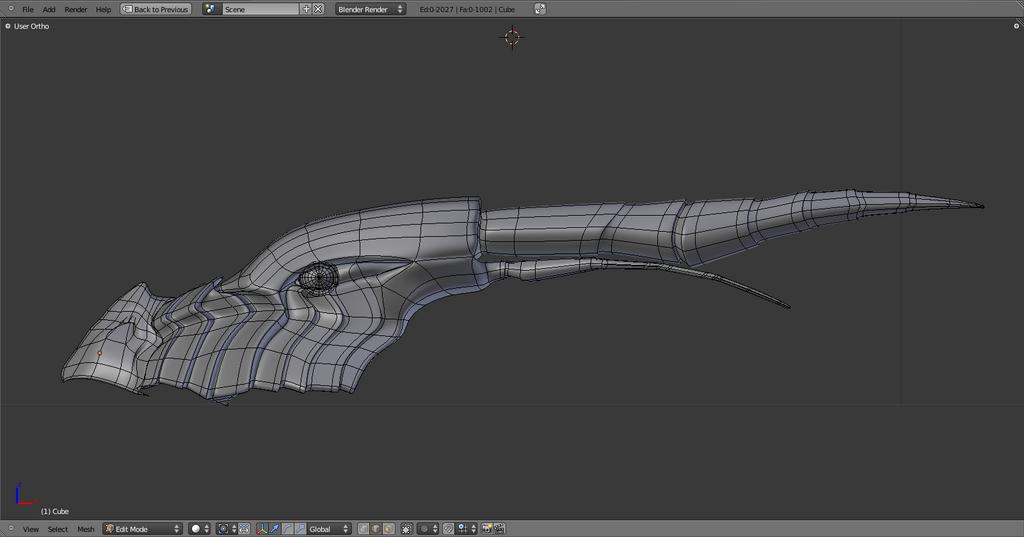 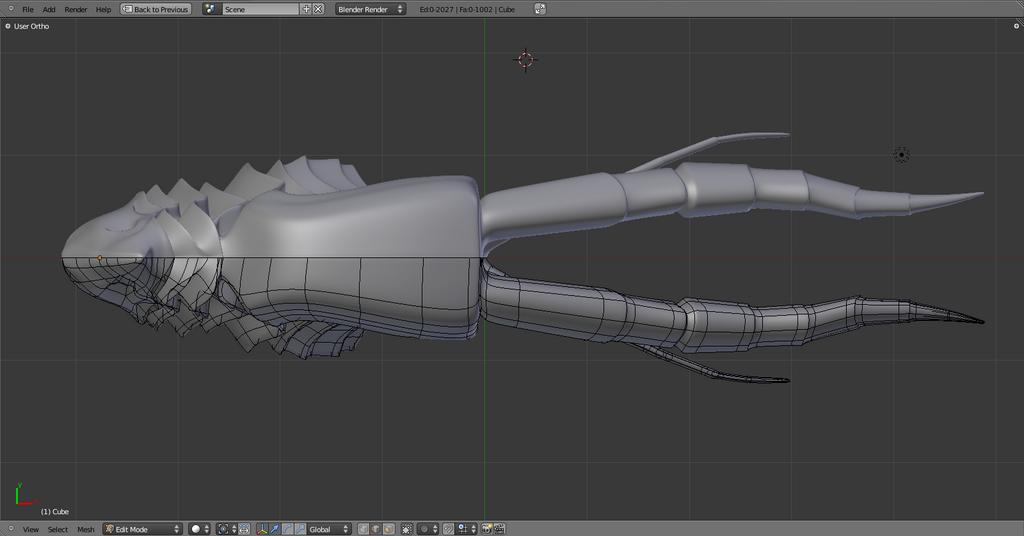 Really? No comments; I wonder how many people have viewed it. I wish the view counter wasn’t broken… anyway, I’ve finished this section, and hope to sculpt it soon. 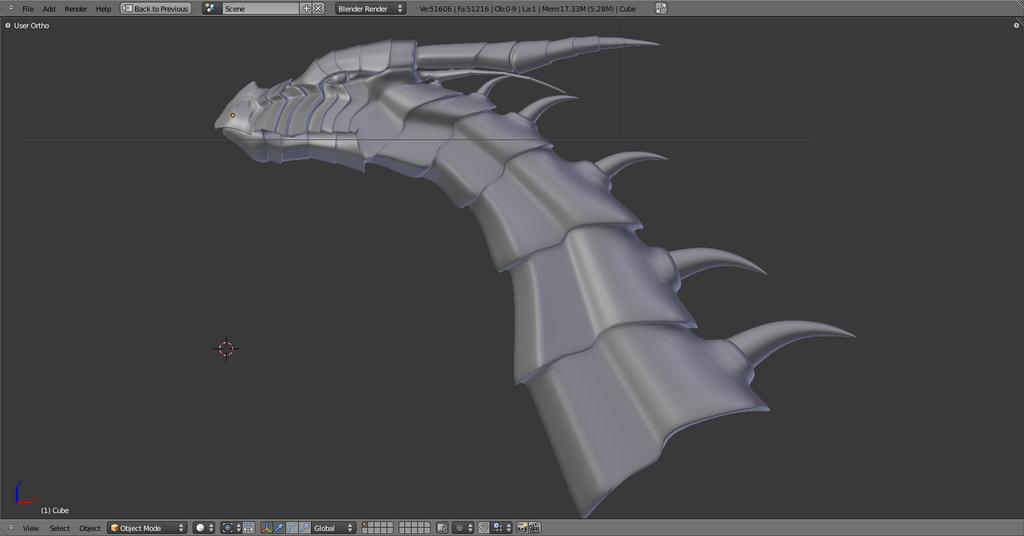 Haha, well the reason i didnt comment before is because i wasnt sure what i was looking at…Now i can clearly see the head and the neck, which looks awesome!!!

And yeah i wish the counter wasnt broken too…grrr

Here’s a render; not necessarily the final one (I was actually planning on making 2), and I know the scales are sort of rushed and not that great, but I put this up anyway thinking it looked at least somewhat decent. I’m not sure; any input on it? 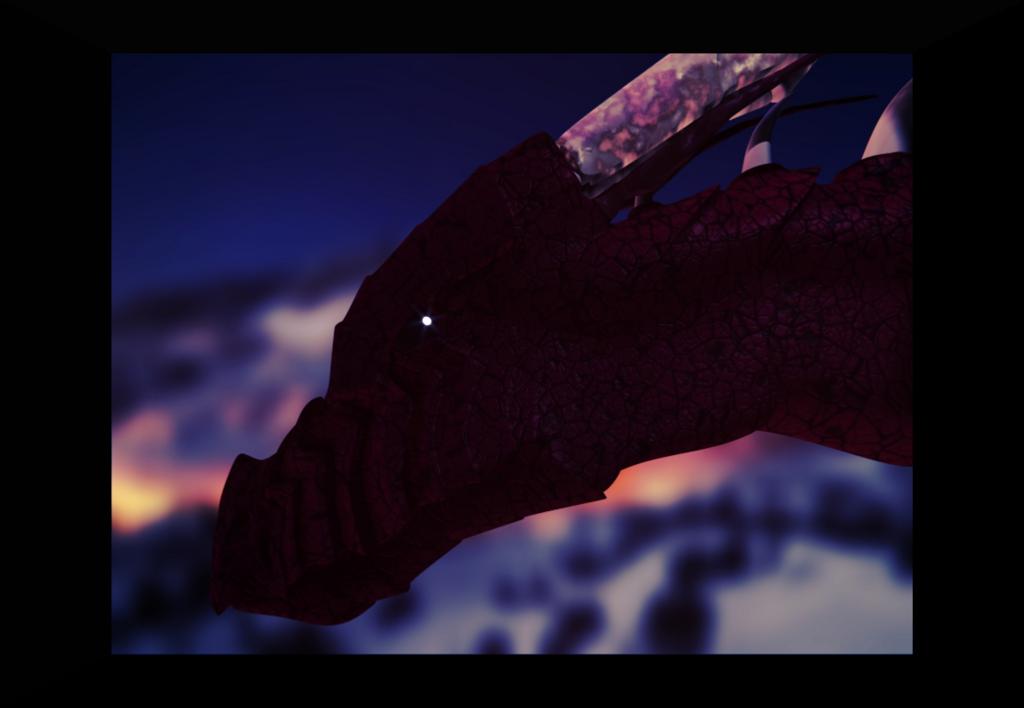 Needs a better light setup i think, it is a bit too dark. I dont like the eyes at all…i mean there are no eyes, just light?? I think you should make actual eyes…I am not sure about the horns either…they have very strange coloring…i dont think it suits the dragon. The scales however i like, but i think they look more like a rock texture or something…dont scales overlap each-other?
http://www.google.com/images?um=1&hl=en&safe=off&sout=1&biw=1408&bih=647&tbs=isch%3A1&sa=1&q=dragon+scales&btnG=Search

like the background, but what is up with the black frame??

hey, cool model!
but I have to say the lighting doesn’t do it any justice. I think it looks dark and flat

a light coming from the side or from behind the camera could really help. (judging from your background image, you’ll probably want it to be a strong yellow/orange color)

some color variation in the textures would look good too.

reference and inspiration is always good:

This is a 3D cartoon illustration created in my space time for self improvement. This dragon was originally designed by my favorite artist, Ben Henry. He is also known by his nickname, 'Roundeye', on the Internet communities where he posts. The title...

good luck on this

@ DDD, yes, I did make eyes, they just weren’t really visible since everything was so dark. As for the horns, I’m not happy with them either. They’re taking in too much diffuse from the lamps, but I don’t know how to change that since I want the skin to be effected by them. As far as the scales go, I was going for more of a leathery skin type thing. I’m not trying to copy off of other dragons that have already been created.

@ Jeepster, thanks as far as the model goes. You did a fantastic job sculpting the dragon for Sintel!

I’ve adjusted the lighting some, but I’m still not sure about it. I don’t want to make it too much lighter, though. I added some slight color variation, but if you think it doesn’t look… bold enough, I guess, tell me. Thanks again, and I hope this one’s better!

the lamps should have the option ‘layer’ somewhere… with that you can use them on their assigned layer only. if you want to use them on more than one layer just select them and then in the m menu hold shift and select multiple layers.
I agree that the shells should overlap themselves more, and this is missing the indepth feeling… maybe you could create a normal map? I mean for the texture…

Your modeling is nice, edgeloops look good and it nice that you’re incorporating the main head and neck scales into the main mesh instead of bolting them on.

However the textured presentation doesn’t show much as the lighting is way too dark.

@ Ace Dragon, I did post an updated image if you didn’t see it; I adjusted the lighting for the better on it. If you did see it and still think it’s too dark, keep in mind it is a night scene; I know that the texture isn’t as noticeable as some might want it to be, but I can’t make it too much lighter.