Drivers and custom poperties were not mirrored to the other side

Hi. Barely figured out what gone wrong with my rig when i mirrored half of the rig to the other side. I made a frustrating discovery for myself that drivers and custom properties (and maybe even some of the constraints) didnt mirrored at all or mirrored not properly. Spent already 5 hours to solve it but everything in vain. I tried manually cto copy a driver so i went to the constraint on another side of the rig added a driver again made custom propertie copied data path of it and entered it where it says single property in the driver panel. But it doesnt work.

So how to mirror properly all drivers constraints and properies to the other side?

Hi. Thank you but i already got it work. I forgot to copy all of the drivers initially.

But i have another question. I have hand rig (with three sets of bones) with switching slider from IK to FK. So when i move slider on the N panel to 1000 value my deformation bones which you can see on the middle (green color) are following IK bones but when i move slider to 0 my deformation bones are following FK bones. My question would be how i can use IK and FK in the same time. So at the moment if i for example want to raise my hand i use IK control bone and now if i want to use FK bones i need to turn value to 0 but it will drop my hand down. But i want to use FK without dropping the hand down because i need to position the palm properly or elbow for example when my hand is still up (not down). But i cannot do it with IK. I can do it only with FK. So maybe is there a way to do it somehow by constraints or i dont know. 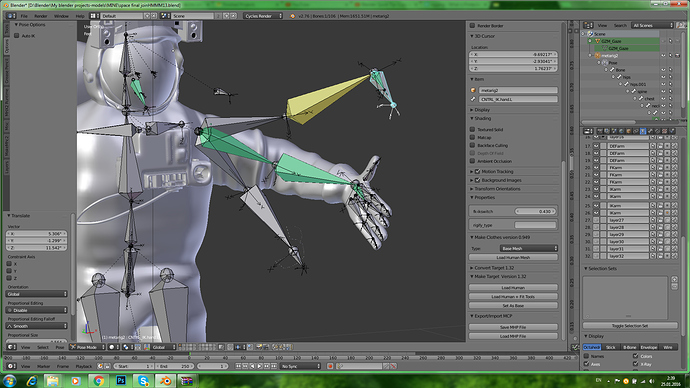 So question would be how to use IK and FK in the same time. Firstly to twig hand a little bit with IK and then switch to FK without dropping hand

I found that if i parent FK bones to IK with keep offset its seems works at first glance. But i am not sure if its best way to make that seamless switch beetween IK and FK.

IK/FK snapping is probably what you want. I’m not sure how to implement that but there are probably tutorials somewhere.