I used a couple different methods for this project that were new to me.
The atmosphere was made using a volumetric shader, which gave much better results than my usual layer weight node strategy, although tweaking it to get it looking right proved harder than I expected.
I made the landscape by painting a mask for the continents using a black and white Earth land mask, and then basically coloured it in using an image of the Earth as a texture.
After rendering I edited it in affinity photo to improve the colours, and added a tilt shift effect and lens flare.
See more of my work at instagram.com/taliesinriver or artstation.com/taliesinriver 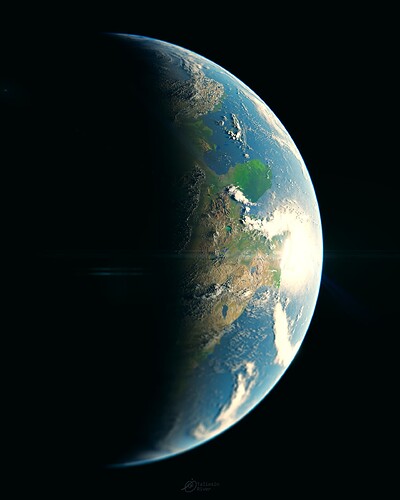 Though I would probably rotate the blur mask 90 degrees counterclockwise as the top and bottom of the image is on the same plane, there isn’t a foreground or background elements so the effect is suppressed. ( Unlike on most tiltshift image of a aerial shot where some parts are closer and some parts are further. )

I’m not sure if the blur makes much sense in general, maybe your suggestion would make it better though!