Hey guys,
I have rendered something that looks like this: http://kedmond.com/reflectedBall.png

What does your node setup look like.
Have you enabled Vector in the render passes ?
Have you animated the movement of the ball in the scene so it actually has a vector ? 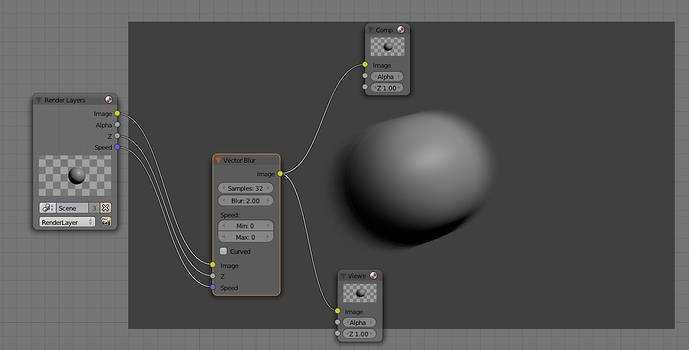 Thanks for the quick reply. Attached is what I’ve managed to do with my compositing. I set up a keyframe at two locations over 10 frames, and then applied a vector blur, as you can see. Is there any way to repeat the blurring in the reflection? Thanks.

Attached is a screenshot of my compositing frame with the rendering in the backdrop. I created a 2nd ball. One is moving from right to left. The animation goes from frame 0 to frame 3, and I am rendering in frame 3. The second ball is moving into the background over the same range of frames. However, the blur of the ball moving into the background looks really bad…as if it’s been truncated. What’s going on with that? Also, is there a way to nicely reproduce the blur in the reflection? Thank you!

I’ve realized that the truncation of the blur of the ball going into the background is being clipped or blocked by the black floor…not sure how to fix this, however. Thanks again.

I’ve sort of worked around the blur cropping issue.

Anyone have thoughts on how to reproduce the blur in the reflection? Thanks.

Well, motion blur in or with reflections is not something you can do in the BI renderer unless you use flip, texture blend and various other nodes in post.

Be sure you’re doing a blur, not a comet. As for the ball’s tail going through the floor, you probably don’t need that much “tail.” If you want to achieve a long streak following a curved path, you could do some kind of gradient effect that’s programmed to follow a path. (A bit of hand-waving here since I’ve thought of the idea but not how to do it, 'tho I’ve seen it done before.) It would basically be a rotoscope effect … the stuff you might have seen in a disco movie.

If what you really want is “cheap blur,” then you’ve probably found it, and now just make sure that the object’s movements don’t give away the trick. Instead, “cheat the shot” shamelessly to “get it in the can.”