I made a request about an additional functionality for the edge slide, that would allow us to clone the edges and slide.

The proposal is on rightclickselect website, so if anyone would like to see it in Blender, upvoting the request is our best bet…
Link: https://blender.community/c/rightclickselect/QDbbbc/
Personally I think this is a very, very powerful concept.

Learn and one day you might propose to a woman you like and love…
& it’s not even a concept, since it’s an existing tool in Cinema 4D.

What you mean?
I don’t speak english, I’m sorry if there’s something difficult to understand there.

I can see the utility in cutting/sliding edges like that, but I think it would be better to make it something done by the Inset tool if invoked in edge-mode (as opposed to just working with faces).

That pretty much looks like the inset/offset tool if it worked on Edges. It would be very handy to have indeed.

If the result could be the same I wouldn’t mind, but since this is an edge slide tool and we already have a similar edge slide tool in blender, it seems logical to include there.

Also imagine a function to preserve curvature when sliding those edges…

Btw, this seems like a simple function, but it’s a game changer…

Yes, I miss this functionality from modo, it really is needed.

Is there any app that does that? “preserve curvature” Sure would like to have it.

Is there any app that does that? “preserve curvature” Sure would like to have it.

This would be great to have.
I don’t know anything about coding but it shouldn’t be a huge challenge. Maybe one of the amazing addon developers out there can do it.

Modo can do the preserve curvature too.

An indirect way to do that ‘preserve curvature’ would be to subdivide with the smoothness cranked up. 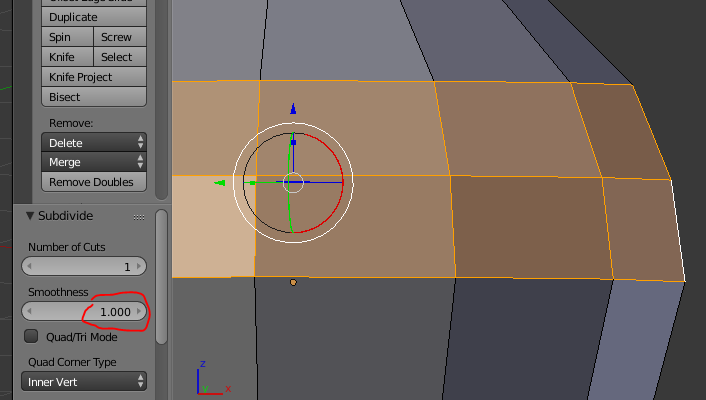 image.png706×400 23.5 KB
Then edge slide it manually afterwards. Though I’ve had the smoothness react in some pretty odd ways sometimes. Having a slide function built into subdivide(and split even for when you want to increase the number of cuts) would be nice too and could be a decent equivalent to preserve curvature.

Inset with 0 depth is kinda close to that clone edge feature, though it only works with face selections and isn’t quite as flexible.

Have you tried using rip fill (alt + v)? You can make the result slide by pressing g before you confirm.

It works. Still have to clean up a few edges afterward though.
Thank you!
Edit: Yup, it does result in overlapping geo in cases

It’s not the same thing.
The rip fill gives you a very messy overlapped geometry and don’t work as expected in most cases.

That depends on the case. Yes I realized it doesn’t allow you to move the new edge past another edge without turning clamp mode off, and with clamp mode on you get overlapping edges. It should still work in a lot of cases to get similar geometry.

Well, Cinema4D operation leaves n-gons so that’s no better the way I see it. I like how it can go ‘through’ the edge it started from though. Preserve curvature would be awesome as well in my opinion. The unexpected element might be because it takes mouse position into consideration.

In all situations I tried, it always created overlapping geometry.

Well, Cinema4D operation leaves n-gons so that’s no better the way I see it.

That’s where the power is imo. I can create very smart topology with this and then connect the points later… very, very powerful…