Can someone explain in plain english what the edge split modifier does and why its usefull? I read the manual but I dont understand =/

Three identical cylinders with ‘set smooth’ applied to two of them. Guess which one has the ‘edge split’ modifier applied to the top and bottom edges. 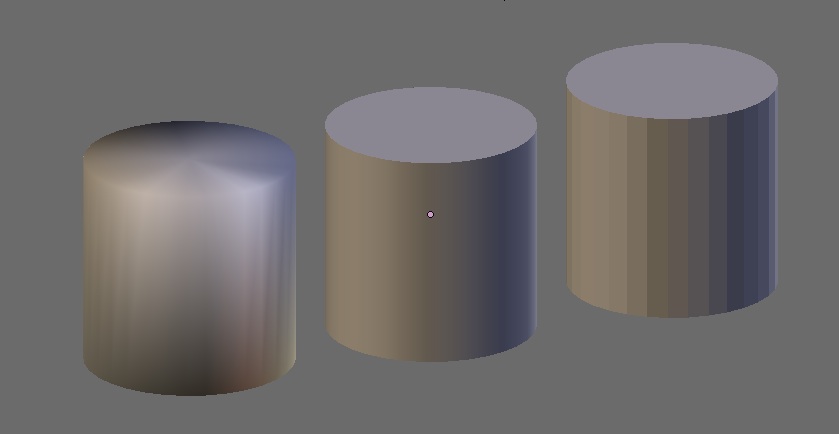 The one in the middle.

Which one looks the best ?

Richard: well firstly thank for the picture, that makes it clearer, now I can actually see it doing something.
So it makes smoothed edges look sharper.

why not just set the top to solid? I still dont understand how this is practical when it comes to modelling.

Ricky: okay I applied the modifyer and it split the edges. but I didnt see any new geometry created.
a 6 sided cube still has 6 sides, they were just split apart.

Sorry if Im missing the point

Well, first off, it is a modifier. No real geometry changes happen until it is applied (that’s the nature of a modifier).

It is true, however, Edge Split just does exactly this - it splits edges. That means for every edge that gets split, a new egde is added, thus adding geometry to the mesh. (Say, two vertices are connected by a single edge, that is set to “Mark Sharp” - Apply the modifier and you’ll see that there are now two edges connecting these vertices, the edge count will be increased - however, no new faces or vertices will be added!)

But, I strongly disagree that this should be used as a last resort. This modifier does have a lot of uses in Hard Surface modeling and I use it a lot. I have never encountered a case where adding this modifier caused problems by adding some “virtual” geometry. Indeed, it is a very welcome replacement for the Auto Smooth feature, which was awful to use in certain circumstances.
At least for me. One of the modifiers I use the most.

ah ovcourse… that makes sense. edges not faces. it does make things look a heck of a lot neater.

I have never encountered a case where adding this modifier caused problems by adding some “virtual” geometry.

For so far as any real time engine is concerned, a split vertex counts for two (or more, depending on the amount of edges connecting to it) and you can only use so many vertices in a single DrawCall. I wouldn’t concern myself much with this, though.

Just don’t apply the Modifier unless you absolutely need to (for what reason, I wouldn’t know. Even exporting doesn’t need it).

why not just set the top to solid? I still dont understand how this is practical when it comes to modelling.

That’s indeed a possibility with Richard’s example, but sometimes you want a sharp edge between smooth surfaces, like here.

as far as a game is concerned any hard edges are actually two or more vertices in the engine… regardless of whether you use edge split, draw solid or whatever…by the time it hits the graphics card multiple normals are needed to draw the hard edge so the verts get duplicated…

the only difference is if the UI tells you that there are multiple verts or not. ( and also for other modifiers after the "edge split)… subsurf after edge split is not the same as before… it may leadto holes in the mesh… you don’r get that with per face smoothing…

but also if you don’t have a lot of high res object in your scene you cant use it
but when playing with 100,000 of vertices you ahve to think twice about it
because you going to end up with millions of vertices and that will slow down your PC

have fun and happy blendering

Here’s an Edge Split tute I put together a few months ago.

Here’s an Edge Split tute I put together a few months ago.

Thank you, great tuto for nOOb like me.
I still faced one problem though… Pls see the pic
How can I disable the top and bottom faces to be subsurfacing ?
Shift + E method will fill the top but ruins the perfect round shape.