Hey everyone, since 2.93 or even earlier we didn’t have new features for Eevee, Clément started working on a branch called eevee rewrite, and tonight he just started putting the first patches in master

This is coming with pretty good timing as well, as GPU prices are finally on their way down (still overpriced, but no longer in a truly insane way). Combine that with OSD performance being fixed and the animators here are going to have a field day.

So, according to that link, Eevee Next will definitely have support for POM in an upcoming release?

My big hope for Eevee right now is the devs fixing the many open, confirmed bugs with GPU subdivision. This seems like encouraging progress, if they’re re-writing Eevee then those bugs should be obsolete without having to be fixed. Here’s hoping this releases soon!

Clément only added some shell code to register a new render engine. For now, this engine does not do anything, so there is no reason to try to test it.

Hi everyone, This topic is about communicating about the state of the EEVEE rewrite. For about a year now, EEVEE rewrite has been conducted in a dedicated branch. We are now entering a phase where we think it is better to merge it to master to...

Nice! Eevee Next will have raytracing!

I also hope that Eevee Next will be more real time, for real this time

Personally I would not really call current Eevee real time because it still needs a few seconds to render smooth shadows. A true real time engine would be more like how a video game engine works (like Unity and Unreal), with beautiful lightning and shadows and minimum 24 FPS, no render time whatsoever.

Eevee Next will use Metal on Mac instead of OpenGL:

Yes. As of today, that is the plan.

Eevee next will have screen space GI, but there will be no real raytraced GI or reflections, AO etc. until they move it over to Vulkan. So this is probably a fair way off.

Eevee next will have screen space GI, but there will be no real raytraced GI or reflections

It is essentially a new render engine. It is a good decision to first focus on functionality and performance and getting a very solid basis.

If Blender would set up an own financial campaign for eevee 2.0 there would be enough money for 1-3 more developers - eevee is incredibly popular.
I know Blender has its donation system policy and doesn’t back away from it, but sometimes they stay behind their possibilities.

I know Blender has its donation system policy and doesn’t back away from it, but sometimes they stay behind their possibilities.

They are aiming for sustainability. Having long term financial stability can not be achieved with campaigns. In the worst case, it would harm the development fund.
Pretty much all the time when this kind of discussion took place, there have been some pointing to Krita and claiming campaign funding could even be better. Meanwhile Krita has changed to more sustainable funding too for obvious reasons.

Edit: If you look at the difficulties in the development path, it is hard to believe that everyone who donated specifically for Eevee would be happy… It is not that unlikely they would have kept going with an earlier iteration, leading to a suboptimal, less future proof result.

Development for real-time rendering tech. tends to be more difficult because it has to run fast enough to be interactive, yet it can’t consume so many GPU cycles that only those with the highest end cards can use it. It is not like Cycles where a (somewhat unoptimized) version of a feature can go in right away and then get a performance boost later. Not only that even, but the very nature of raster-based tech. means they don’t work well with every other feature out of the box (so interactivity with the other stuff is yet another effort in and of itself).

A campaign to find a developer from outside the Blender dev. scene might bear a lot of fruit early on, but you run the risk of the guy dumping the code onto the existing maintainers and bailing out as soon as the contract ends. There is a reason why the core team takes a close look at the active volunteer developers when looking to create a new paid position. 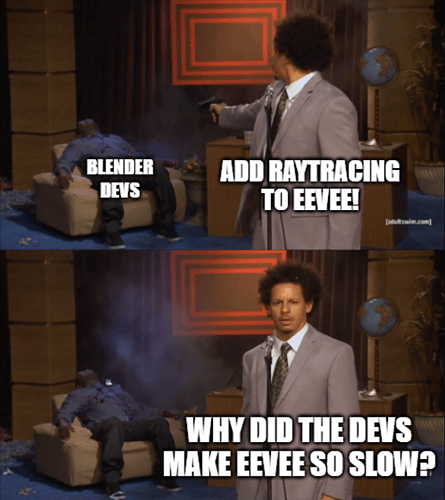 Even Apple’s Metal supports Hybrid Raytracing and is used in Metal based games. 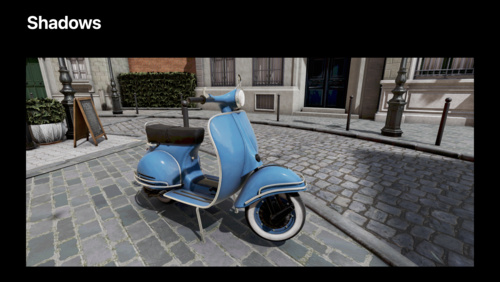 Discover how you can combine ray tracing with your rasterization engine to implement simplified graphics techniques and elevate visuals...

You are comparing apples to oranges, Unreal can also run a raster video game at 1000+ fps while blender takes 500 milliseconds to export the default cube at 1080p from Eevee.

It does and it is amazing. I love unreal but sometimes for a very small project Eevee could be very convenient to use however like I said SSR can sometimes look horrible and GI is pretty much non existent for eevee.

I don’t know why @LordOdin so scared of new technology