Before asking my question, let me set the context. Id did began to learn Blender the proper way through the tutorial a year or 2 before but after a few chapters I lost interest. Sadly this is a personality trait thus I’m trying to cope with it by building a prototype as quickly as possible then improve on that little by little better to better way then recreate what was rushed at the beginning. Right now my goal it to make a couple scenes ; including buildings, infrastructures, transportation and objects, I’m not even tackling characters or I’ll do them very summarily by intersecting a few boxes & spheres.

So I hope it’s clear my goal is to do something as quickly as possible without being completely wrong (if my objects turn out to have 10 times more vertices than a proper way, I might have to slow down a bit & take the time to create a bit better).

My first task is to create and empty structure where I’ll put a camera ; basically a room where in my final project the starting character head will point as the camera. So I’ve created a cube then one a bit smaller then another quite smaller ; the 1st is the object Exterior, 2nd Interior, 3rd Door. Then I duplicated the Exterior and names it room, with which I’d apply Boolean Modifiers, then I disabled the original (Exterior). In this image, I selected interior to show that Door goes all the way inside Interior. 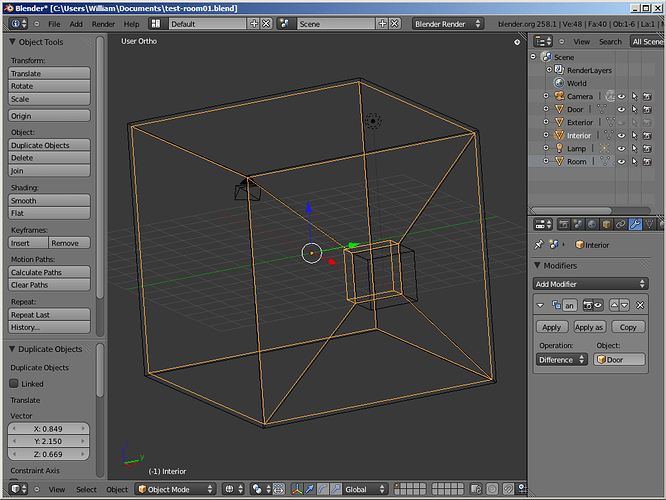 I then made the difference of Room with Door then hid the later. This image show the result. 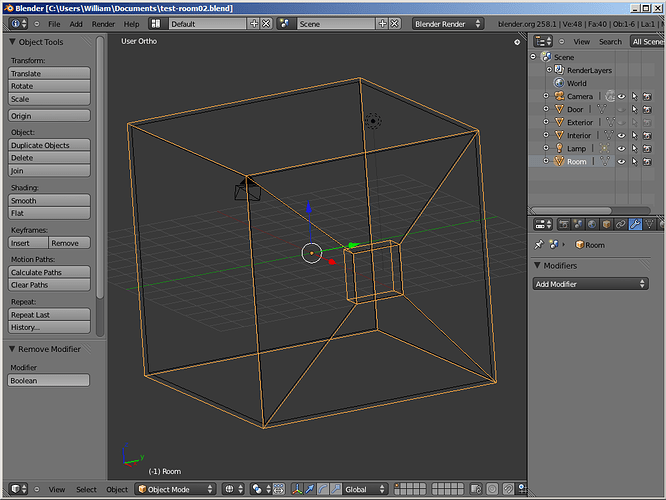 I then wanted to remove the interior from Room (as in last step) by make a difference. The result isn’t at all what I’m expecting, it’s just the door frame. 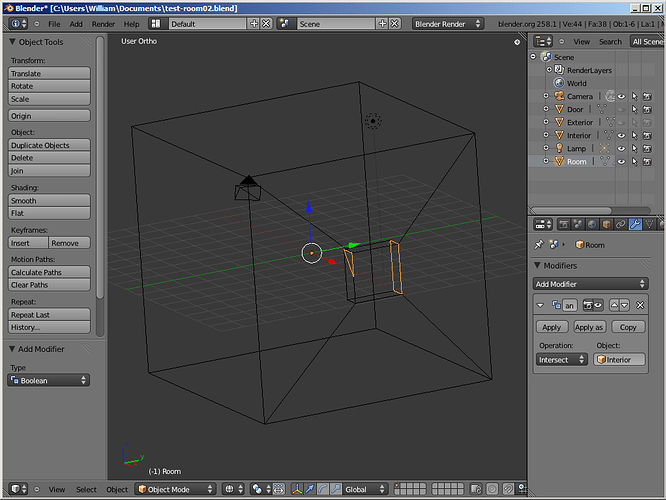 I was hoping to have a room by now. Just like if the last step I took a circular blade (used to install a door handle) into a large watermelon and this step I’d just scoop the yummy (red) inside ; ending with an empty (green) shell with a hole.

I have also uploaded the project files (on this site) but there’s a maximum of 3 files per post so they are on my homepage: http://dynv.qc.to/content/blender_Empty_object

Thank you kindly for your help

When you scoop out, try different settings for the boolean operation (it usually alternates between intersect and difference), I don’t know why but things seem to get turned inside out.

Another trick which can sometimes work is to convert your mesh to a mesh (hmmm!) using ‘Alt C’, and then for good measure recalculate the normals using ‘Ctrl N’.

Union… I would likely not have guessed, especially with the preview it showed. :\

So here’s the expected result with a nice interior that I can put a camera in: 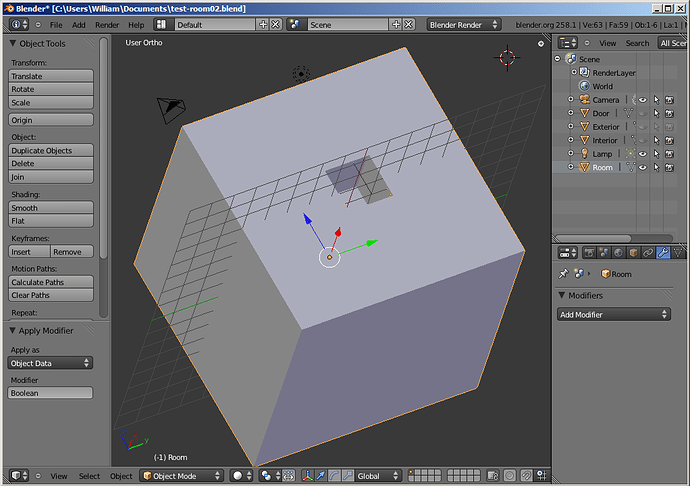 And the modification preview which brought the result (I simply did undo (ctrl-z) after reaching the result so there’s no mistake, it’s really that operator): 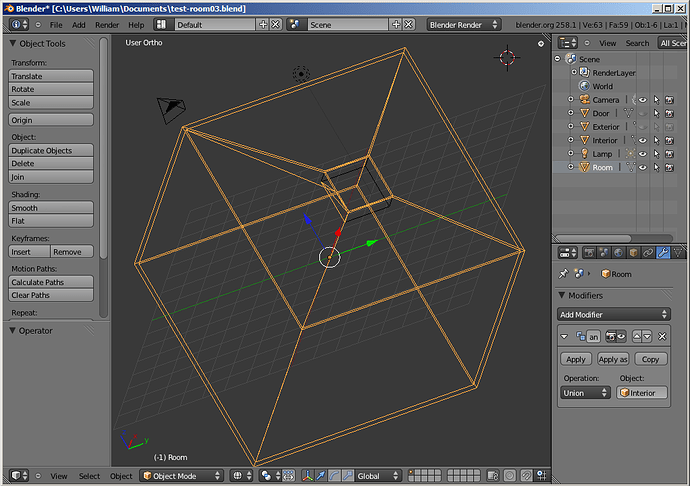 Another trick which can sometimes work is to convert your mesh to a mesh (hmmm!) using ‘Alt C’, and then for good measure recalculate the normals using ‘Ctrl N’.

I did not fully understand. Which mesh should I have done that on, Room or Interior ? Do I apply the Boolean (modifier) after the operation (with the new version of itself) ?

Sorry yes, after you apply each / the modifier.

I did not fully understand. Which mesh should I have done that on, Room or Interior ? Do I apply the Boolean (modifier) after the operation (with the new version of itself) ?

Sorry yes, after you apply each / the modifier.

That still doesn’t let me know the order of the procedure, I’d have to try everything. Please explain the alternative for this case.

You could help me by explaining it, all I know is that with a little trial and error I can get the desired result!