I’ve been working on a scene for a competition in a LAN-Party, and I’ve almost finished it, this is how it looks right now: 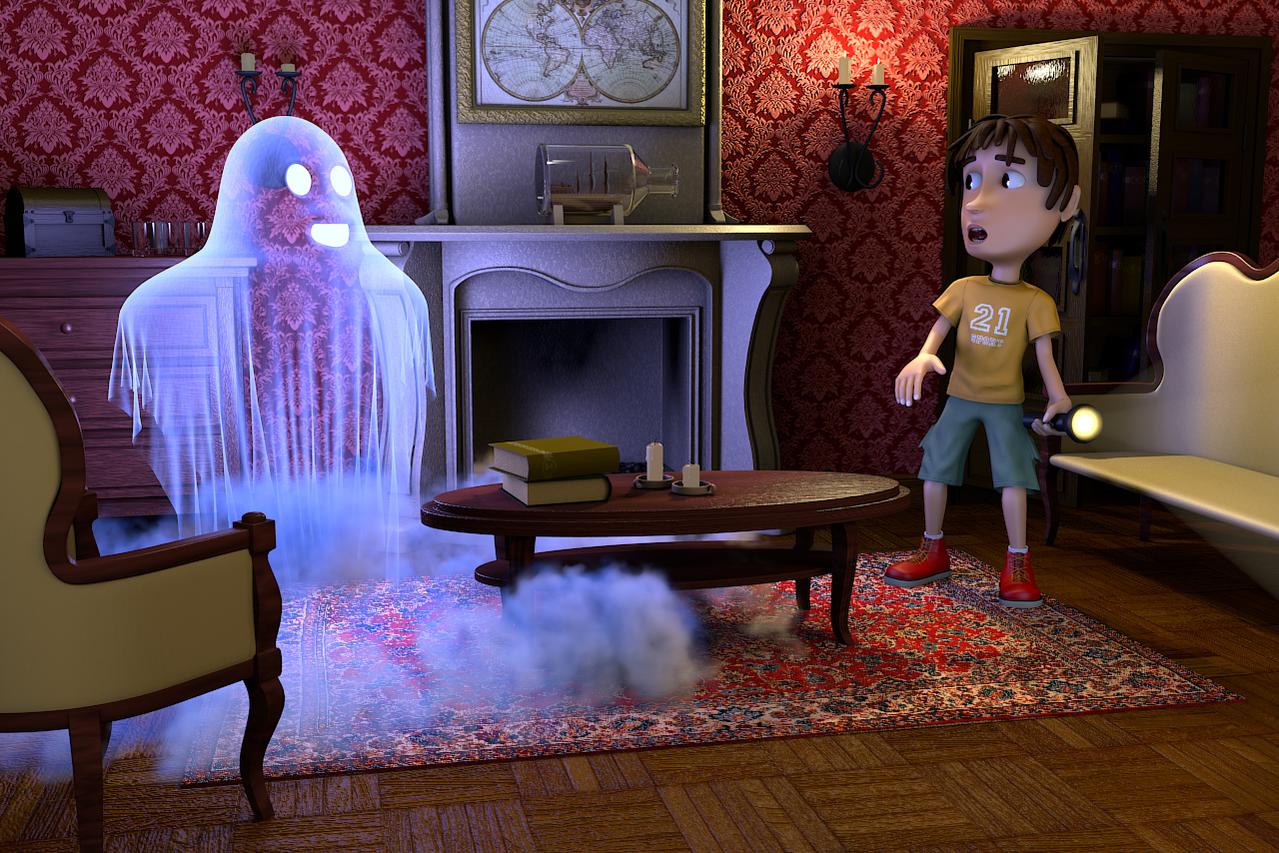 I have to change the wall texture because all the materials must be non copyrighted, but it will very similar.

I’d like to receive feedback to improve it, I’m not sure if it looks quite empty and maybe I should put more objects on the table and over the chimney. By the way, I can’t use post-production because the rules of the competition don’t allow it, so no DoF, no lens distorsion effects, no bloom… at the most I can use the color management options in the “scene” tab.

Maybe add some messed up papers on the table, I don’t know what would nice over the chimney :S.
The couch looks kind of… Flat, I don’t usually see couches like that, maybe make it a bit more “fluffy”.
I love the character model, I wish I could model human characters like that xD.

I agree with Zoeo that you should add some messed up papers. In general, the scene is very clean and if that is your intent then you have definitely accomplished that. However, the cleanliness has made the candle pattern of “tall then short” pretty visible. And that one set of candles is apparently really bright. While you can’t do post-production I assume you can change the light intensity/direction and try to get more shadows. With less light around the edge of the scene, you could move items you have already made closer to the center to create a more compact scene without too much more work (i.e. move the chest on top of the dresser to the mantle).

I agree with Zoeo about the couch to the right. It is definitely too thin. Thicken that up and make it more cushion-y. Also, more dramatic lighting could really help the scene and wouldn’t necessarily require any post.
It’s really well done though, good work!

Hey, thanks for your answers, I have no free time until weekend (busy week) so on Saturday I’ll work on my render considering all your advices.

Just from my perspective it doesn’t seem that your male character is looking at your ghost (which is pretty cool btw) but off to the right of the ghost.

Maybe add some kind of nautical instruments to the mantle over the fireplace as it seems like the décor is of a nautical nature.

There’s one thing that throwing me a bit about your scene. There are only two lit candles on the wall sconce on the right and his flashlight is on but the entire scene is lit. I don’t know if it’s because I don’t see another light source or what and it could also just be me.

i think the ghost should be more flowy. you could use some ‘wind’ to ruffle it up a bit.

Nice! You mind explaining you shader for the ghost?

Looks really good. I don´t think you have to put so much more effort on the actual interior except the couch. If you decide to add paper and stuff, I would be careful and have a reason for having what you have. So why is the paper messed up on the table in the living room? Is there a tv in the room, ad a remote instead. or a photo, Sudoku/crossword magazines, or what are the people who lives there doing in the living room.

However I would spend more time on the ghost. I would try out modrons advise. and maybe see how it looks with less wide shoulders. And the last thing. take down the bump on the floor, don´t overdo it.

Otherwise I really like the scene and idea, the ghost is cool with the smoke and all. I wish you all luck on the competition.

Thanks to everyone who posted, even though I couldn’t achieve all the advises you gave me due to the lack of time (my job leaves me no free time) I could change some things I think it looked better than before. In fact I won the competition xD However, it was a amateur competition xD

Nice! You mind explaining you shader for the ghost?

There you have a screenshot of the shader configuration. As you can see, it is just a simple Z transparency. Apart from that, there are some lights inside the ghost because i wanted to make it look like it emitted light, and those lights affect the ghost itself. 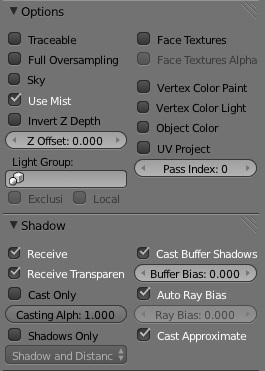 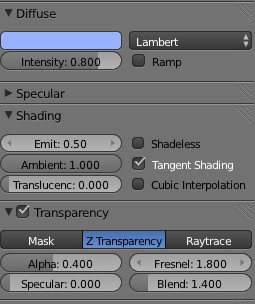 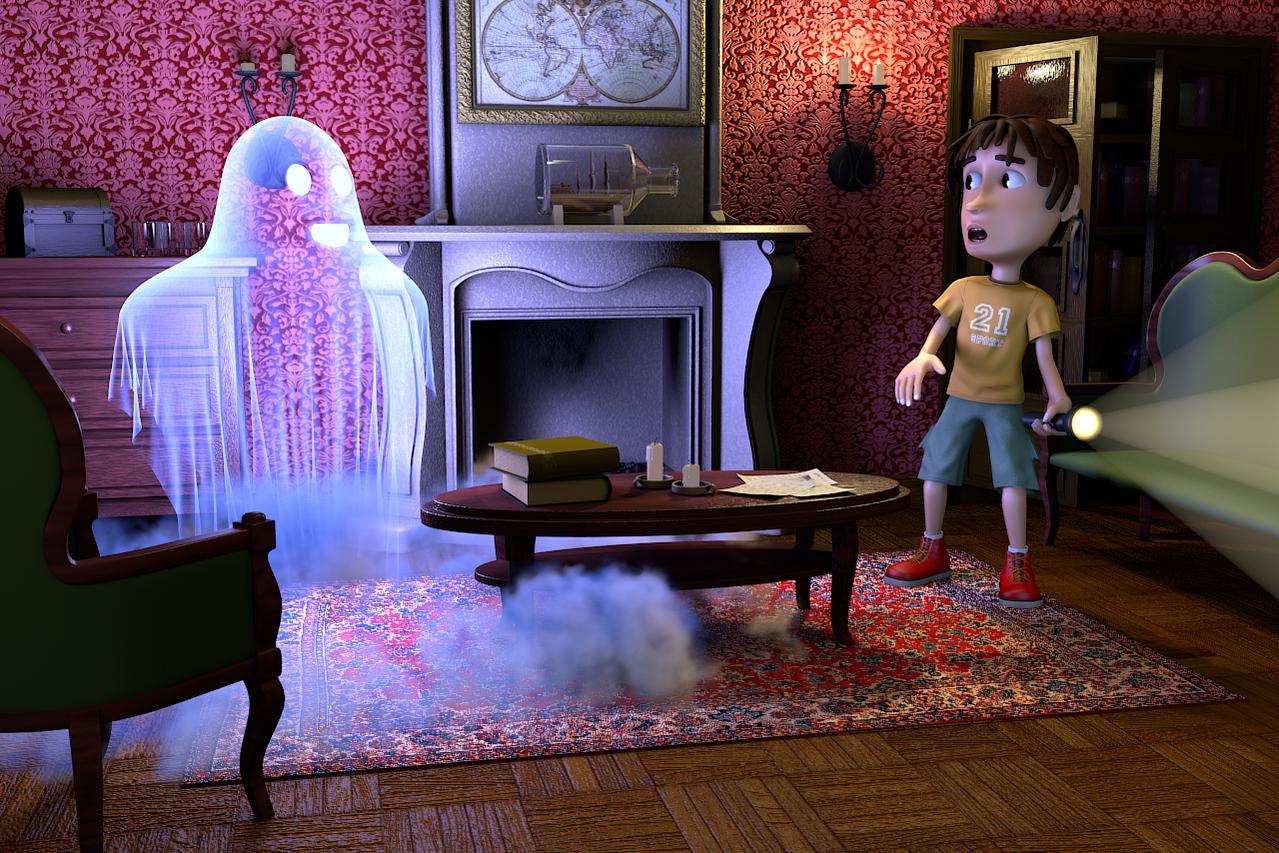 Great pic. Did you use the cloth simulator for the ghost?

In the second image, the ghost looks washed-out; but not in the first.