After so many experiments with bullet physics and the fluid simulator, I decided it was time I would venture further into modelling, beyond mere glasses and bottles. This are my results so far: 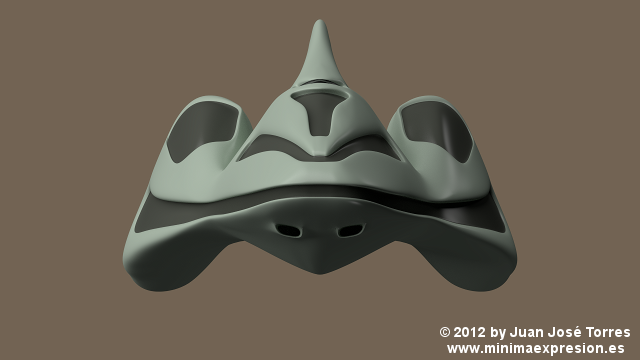 Back view (there is a problem with some vertex around the vents, I have to fix that yet): 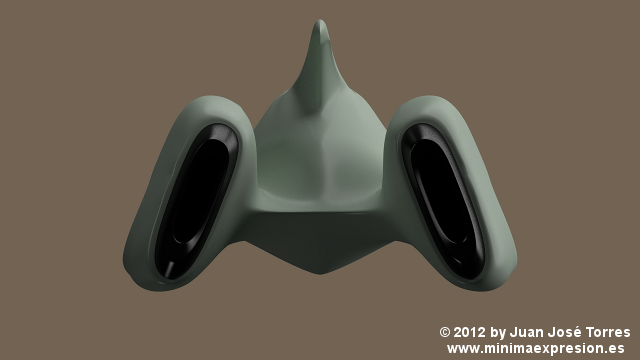 First post update: this is the present look of the project. Everything done within Blender and rendered with Cycles. No external apps post processing. 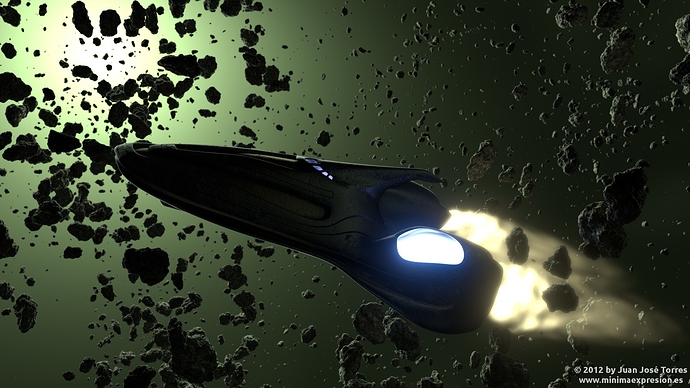 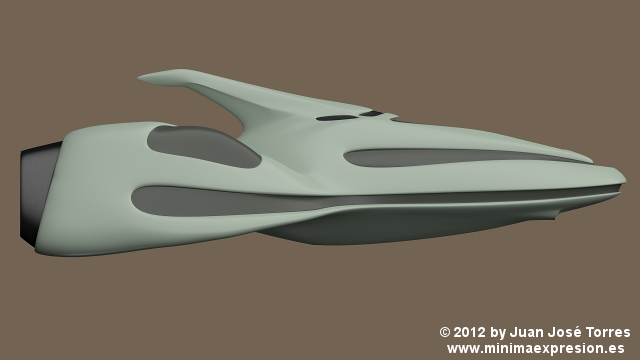 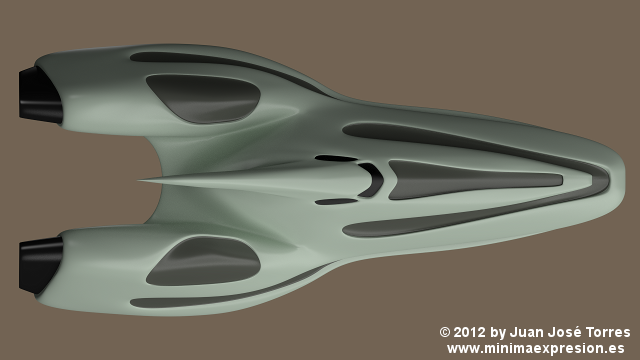 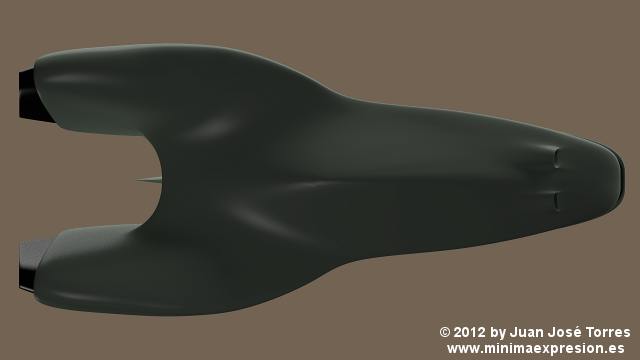 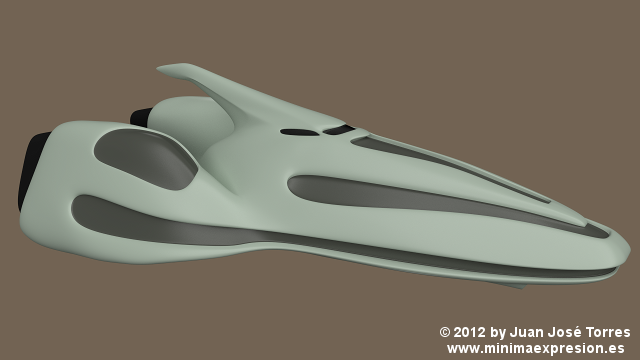 Materials are pretty much provisional and I still have to start creating some textures. I’m still pondering additional detail, such as greebles in the dual engines. C&C is welcome (specially suggestions for texturing and further detail).

Cool design, wats the scale? I am guessing the small window all the way on the top roughly the height of a person?

Lets see this thing spiced up with textures and effects.
Greebles you can do without, but add some cut outs for panels. Texturing is my weak spot so cant help ya there.

Actually for me is to smooth. No some dramatic sharp sportines. And it looks like from sky… 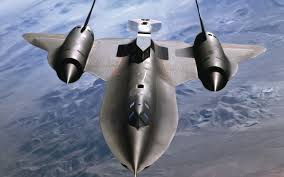 Thanks a lot for your input. I was considering cut outs myself and your comment kind of reinforced the idea.

As for the scale, yes right now the window at the top more or less marks the scale. I might do some changes there, though, because I would like to give the impression of a bigger scale. Maybe making the window thinner on the Z axis, or dividing it into much smaller windows. I’m still juggling with the idea.

Not yet. I will probably do it when the model is in a more mature stage. I still have to fix many things, and want to concentrate on getting right what I have in my mind (specially bridge windows).

Nice start…looking forward to seeing it progress. For texturing, all I can say is do the latest tutorials like at blendercookie. Every time I turn around, texturing changes in Blender.

Very interesting design. Organic lines…
I understand it’s all the artist’s touch and imagination, but just curious how would you explain functionality of bended element (on top top of the cockpit) for a starship?

Very interesting design. Organic lines…
I understand it’s all the artist’s touch and imagination, but just curious how would you explain functionality of bended element (on top top of the cockpit) for a starship?

I doubt about the fuel tank, but radar… it’s quite possible or something connected with SlipStream technology XD

i like your ship and its organic shape. imo, it’s not to smooth, but if it is designed to maneuver within a planets atmosphere, you could add wings on the sides of the propulsion units. cool model!

Thank you everyone for the kind comments and useful input.

@dvnobles: I will definitely have a look at that tutorial. So far I have been experimenting with material node setups on my own, but I will get to the texturing part eventually. Will probably try to build my own textures, both for learning and copyright purposes.

@Julian Ray: As you guessed, the bended element started as an artistic whim, but later I began to think it would be an interesting place for extremely long range communications and sensory array. I’m not completely sure how it will turn up in the end.

@Endight: I did in fact try placing wings just in the place you are suggesting. They looked cool.

Unfortunately, they also make the model feel much smaller, and I want the model to give the impression of a large scale vessel. I still might add smaller fins on the sides of the engines in the future, though, but definitely no wings.

And here is a small update on the model. I finally redid the bridge window. Basically, I splitted it into several sections to give the impresion of a large bridge, rather than the small cockpit. 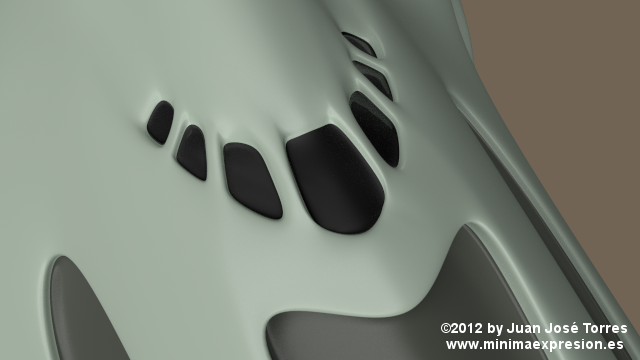 And here is what the model look like at the moment: 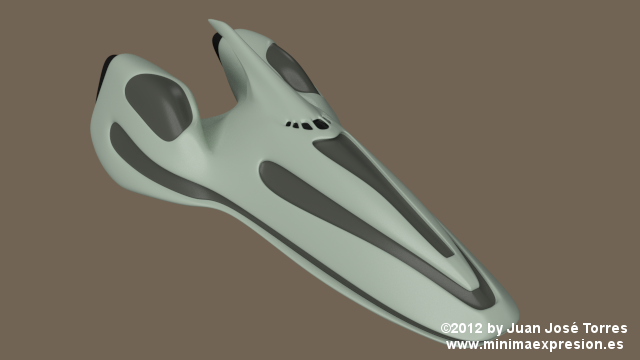 I have started to fiddle with materials, and while doing so I decided I’d try to set up a simple scene creating a Homeworld-inspired background with cycles procedural textures: 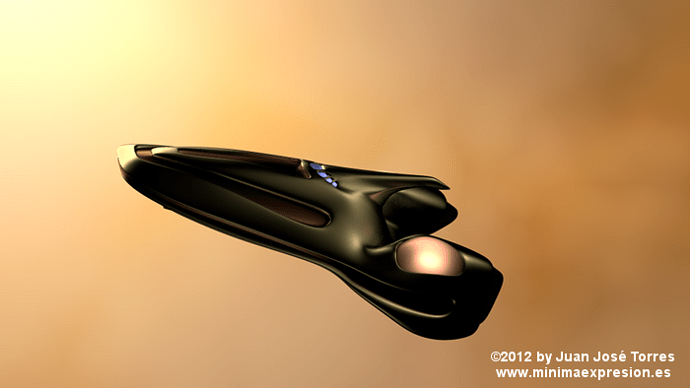 I kind of got enthusiastic and did another test adding an asteroid field and very provisional engine trails: 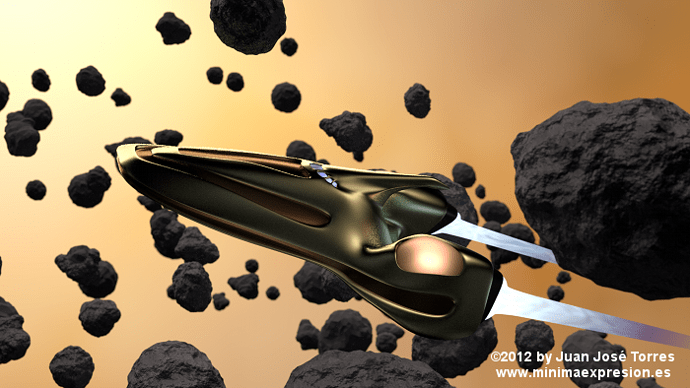 Unfortunately, halo materials are not available yet in Cycles, so I had to create a mesh for the trails and use emissor and transparent materials mixed with gradient and noise textures. They still need some work though, and a bloom effect, but for some reason the Alpha Over node in the composite editor is not working well with Cycles renderlayers. The asteroids need more work, they still look too glossy. Also I need to fine tune DOF and add a fog effect.

those trails look nice, but run the image through the compositor and add some glow to them. (glare node-fog glow)
I am not sure what you would need an alpha over node for…

Well, back from compositing hell. I think the time spent with the compositor is finally paying off. I also completely redid the asteroids from scratch and got rid of the sun lamp which was nothing but a hindrance. The whole scene is now lighted by a single emitter plane, which generates a lot less noise and allows for better results in shorter times. With the sun lamp I had to use 2000 passess (12 min @720p) and the final render still looked rather noisy. Now with a single emitter plane I can get a very decent render at a mere 500 passes (2 min @720p). Heck, even each single pass runs faster than before.

So here is the present state of my scene: 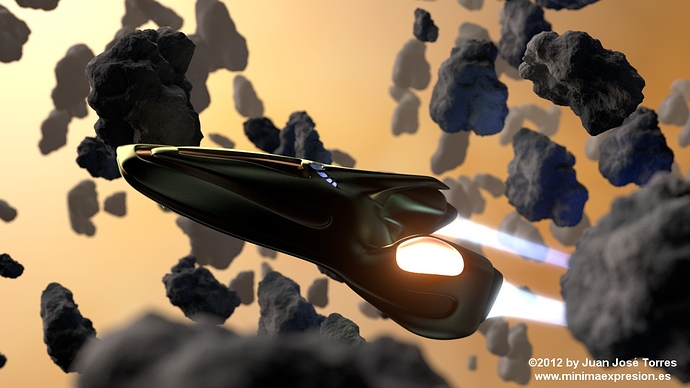 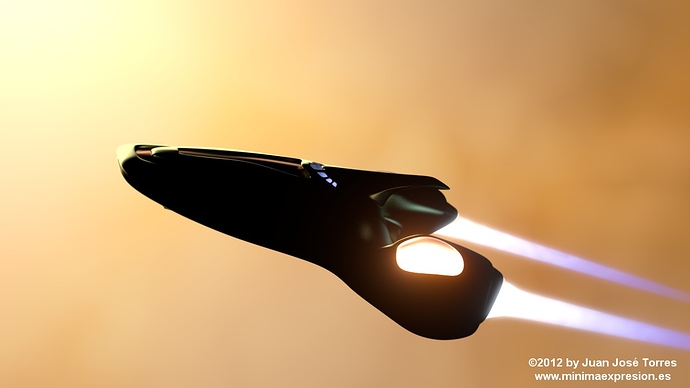 The lighting setup is the same in both renders, but since there are no asteriods to reflect light in the sencond render, the ship looks much darker.

You also asked what I would need Alpha Over for. Well, if you have a look at the ship, you’ll notice that there are actually two emitters there (the white-blue trail material and the white-orange material on top of the engines). I wanted to add a bloom effect to both of them, but tuning the intensity independently for each one. I also wanted to add some blur to the trail. None of these would be possible adding fog-glow to the whole scene.

I managed to do what I wanted by using material index render pass and emitter render pass. I even managed to pull it off using one single render layer, thus saving in render time.

Big update on this project (no, it’s not finished yet).

After much scene tweaking, I finally decided to get my hands dirty texturing the ship model. I still have to finish it, but it’s starting to look much better. Here is the present state: 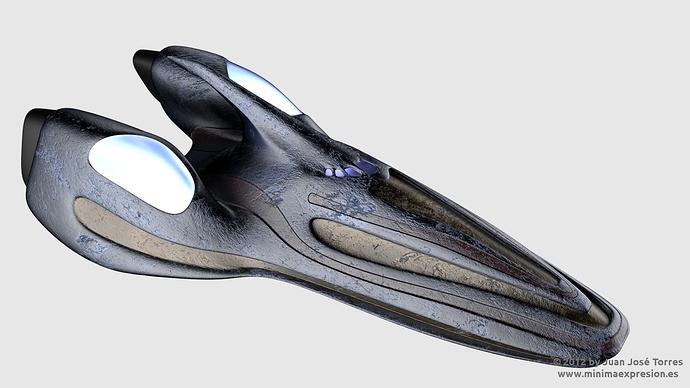 Also, I did further tweaking to my scene to finally get it to my liking: 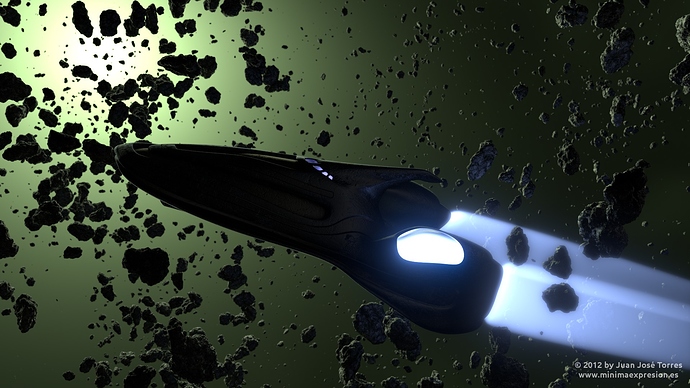 And as usual, here is the updated to-do list:

-Finish texturing (place paint scratch in the right places, think of a texture for the exhaust, trim the seams between upper and lower hull).
-Add some more details.

Not in my to-do list, but I wasn’t really happy with the engine trails and decided to change them. I also did a few readjustments to scene lighting. Here is the result:

Hi Juan, I think the texturing on your ship needs to be smaller for the scale of the ship. At the moment it looks a bit like a toy model in the above renders. Hope that makes sense?