so, some of you probably saw this question on BSE http://blender.stackexchange.com/questions/36780/creating-an-explosion-in-blender-game-engine, but i coudln’t figure it out.
@Monster recommended that the OP increase his speed that he played his animations at. Unfortunately, this caused physics errors that he was unable to resolve with higher physics steps due to obsolete hardware.

now i’m wondering, id there a way that i could do an explosion adding an empty at the event point and then measuring with a near sensor
[Near; character]>[python] with the python being along the lines of

from that line you can see that i don’t python. but that^ is kinda what i’m looking for. is this possible?

So you want an explosion that launches objects (in its near-sensor detection range) away from it?

That should just about do it. You might need to add “import mathutils” at the top but I doubt it. Should work alright. For the setup, you want a near sensor named “near” (wow crazy I know) connected to the python controller on the empty object you’re adding at the explosion event. That should be it!

I frequently do this with collsion and a sphere, but near is nearly the same thing,

(but you can’t pick collision layers for near)

Here is pretty much the code posted above, in action.

The top-level script keeps a running list of near objects, and shuffles that off to a property of the grenade object.

When detonation() is triggered (spacebar here), it takes that list, finds the vector, distance and applies force, to each object in the hitList.

near, + raycast to each target could make a explosion that respected walls etc,

and ‘throwing yourself down on the grenade’ really would block everything around from the hit, maybe even a second or third raycast depending what strength of armor? (armored units block explosions better then unarmored units?)

I wonder how expensive(cpu cost) it would be
to cast 32 rays 6 units long? and use vector reflect :, apply impulse at hit point, and armor etc?

Casting rays from the blast point would be a good idea!

In theory, you could get behind someone else and use them as a human shield.

I don’t see it getting too expensive, until you have multiple explosions affecting a lot of rigid-body objects.

this has up too 2 reflections 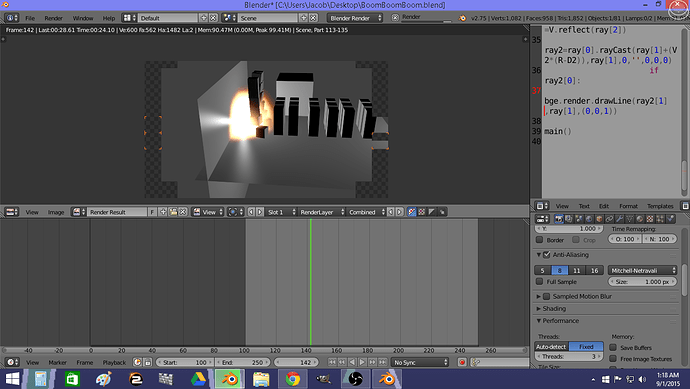 edit: this is useful in animation as well as game

Wow, guys, thanks so much!

Maintain a list of objects that can be hit by an explosion, then do:

It will apply damage and push them away. The closer they were to the center, the more the damage and the harder they are pushed.

@BoomBoomBoom.blend: That is f’ing sweet! Makes me want to make a game around rocket launchers, LOL!