Eye rig help (moves away when head is rotated)

Hello everyone!
I am extremely new to rigging in blender and I am beginning to hate myself, lol. I made a character, and with rigify I was able to make an armature system. I used automatic weights and everything was going just swell. I added bones to make a eye rig and I thought I finished the model. However, upon further inspection, I found that my eyes move out of/into the head when I move the head bone. I’ve tried everything I know how to do, and I’ve ran out of ideas. While I was trying to fix this problem, I also realized that the eyebrows were moving in the same way as the eyes, just less severe. If you all could help me figure out what’s wrong, I would love you forever.

The eyes are a separate object fro the character and are parented to the armature using the bone parent method. The eyebrows are in the same object, but they move too. I’ve added in some pictures and the blend file if you could help.
Dbackup.blend (10.4 MB) 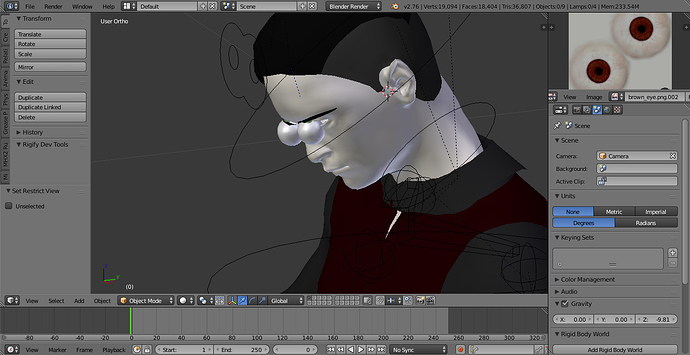 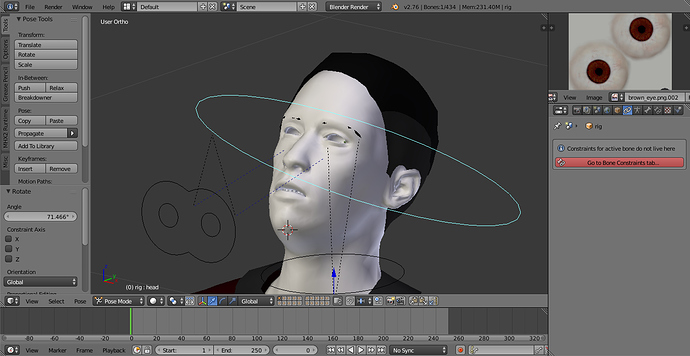 You may well have some weight assigned to the head bone for your eyes and eyebrows as well as to their specific bones - if this is the case, just remove the weighting for these vertices from the head bone. I don’t have time just now to look at the blend file, maybe later.

You are using Rigify correct? Parent to DEF-head not the head control bone. The reason this happens is the head bone (control) is not where you think it is. It is actually at the base of the neck, but the bone is set to display at DEF-head. The relationship line shows this.

In anycase, when using a rigify rig always parent meshes to DEF bones not control bones. (Located on the third to last bone layer.) If you had a bracelet and needed it to move with the wrist, parenting it to an IK or FK control would not work when switching between IK and FK controls. Parenting that bracelet to the DEF_forearm.002 would work with both IK or FK.

Thank you both! It was a combination of both of you! I had the eyes parented to the ctrl bone instead of the deform. Then, parts of the upper part of the head were weighted to the neck bone which was holding it back making the eyes and eye brows move more than the head. It is now working perfectly! Thank you both!