Hello! This is a scene that I’ve been working on recently. I haven’t made any shaders or materials for anything except the rocks. Tell me what you think! 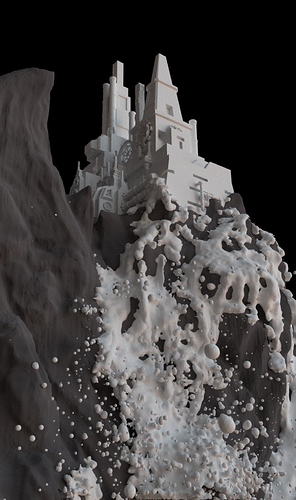 pretty good. I can imagine a sunset or sunrise scene.

The water looks a bit fishy

with the little balls and all, I’m not sure what you could do about it though. Maybe add some foam later? or make it more viscous so it stick together more.

A work in progress in which I’m working on. Tell me what you guys think! Not really completely happy with the water 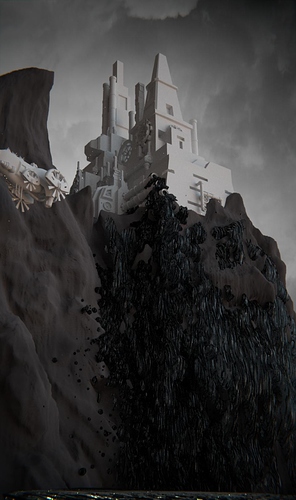 I feel like the problem with your water comes from you modeling the scene too small just scale the whole thing up and simulate the water again and as jouneyman says add foam and maybe viscosity.

A scene that I’m working on in Blender. Tell me what you think!

This looks better then bevore! You used fluid ?, now its still fluid? but looks like stone? because some of the stones influences the pipes on the top. that doesnt looks good. And maybe it would by nicer when the ( i say ) black area looks more different then the oder rocks…im mean the structure could be more rocky. But please tell us if your intension was to make rocks, because it could be oil, but then it doesnt look like oil.:RocknRoll:

My intentions are to have the water look like it was coming out of the pipes however It doesn’t seem to be working for me with the fluid simulator because it doesn’t seem to be meant to simulate large bodies of water. So I’m going to have to change that up somehow, not sure what I’m going to do about it however I have a few ideas. As far as the pipe being influenced by the rocks do you mean the bottom pipe? Yes I’m going to be adding in some more rock structures! Thanks for the criticism!

Hello this is a scene that i’ve been working on lately. Im not that happy with the water but please send some criticism my way to help me be a better artist! :yes:

I like the mood so far. Nice comp and camera angle. Interesting building and ship. Good start on the rock-shape. Obviously the scale of the water-simulation is wrong, but it’s hard to criticize things you haven’t done jet. I would leave out the water-level at the bottom. Great potential in this one. Also for the Steampunk competition?

Be sure that the lighting is consistent. The sun is low in the sky … therefore it probably is fairly orange … and both the factory and the rocks must cast appropriate shadows. Even the waves in the ocean below will catch and reflect a certain amount of light. Given the composition that you have chosen for your scene, the lighting will be absolutely critical.

The positioning of the “rather steam-punk looking” mechanism to the left of the factory is right now improbable: it appears to be hanging in mid-air. It needs to clearly sit on something, and whatever it is “sitting on” will block a lot of the detail from the camera’s view, so long as the camera is at the base of the cliff. Such a camera position might be okay for a “brief establishing shot,” but I’d choose a different point-of-view for “a portrait.” As the shot stands now, a full two-thirds of the frame is, so to speak, wasted.

Likewise, the tonal range: The space on the my-left side of the dark cliff (upon which the castle now sits) threatens to be “dangerously dark, as in underexposed,” while the castle itself threatens to be “blown-out white.” This is going to be a very difficult exposure to control.

I’d grab my trusty “cropping tools” and go looking for “the picture within the picture.” How much of the present shot, if discarded, would make what’s left “a much stronger picture?” And yet, still give the particular drama that you want to convey?

If you still want the water, why you dont try to make the splashy side with fluid, and the not splashy side you can (simulate) fake it with a plane or displacement map. I like the view, its a nice work, i like it.
And ya i think we are speaking about the same pipes. I dont have many experience with fluid, i hope someone can help here. Bytheway
if you make rocks its still a nice work, but i think you should not give up trying out the fluid system.
For the pipes: If you are using a solidify change the offset! Or try to use a solidify. Smooth the domain and give them a smooth modifier.

Yes this is a scene i’m making for the Steam punk competition. Obviously this is something that needs quite a bit of work yet. The Machine on the left side of the composition is an air ship heading towards the factory. The lighting is all completely temporary and everything will be textured and have a material. Im just trying to get everything modelled into the scene first. The water is my biggest problem because the fluid simulator seems to only be meant for small portions of water such as water being spilled into a glass, so thats a problem that i’m trying to work around and not completely sure how to fix. Im planning on adding a steam punk style submarine on the surface of the water and other air ships to try and give my scene some life. I want the scene to feel like this could be a place where a factory could exist and have people hustling and bustling around it working. As always thank you for all the criticism! :yes: