I followed the tutorial about a dissolving logo at blenderdiplom. I want to make this effect in Cycles but I can’t get the fade out effect to work (the faces from the exploded mesh must get transparent over time). The tutorial shows how to do this in BI but not in Cycles.

Tutorial: Dissolve your Logo in Blender 2.6

Dissolving Text in Blender 2.62 made easy!

Particle Age is available in Cycles… 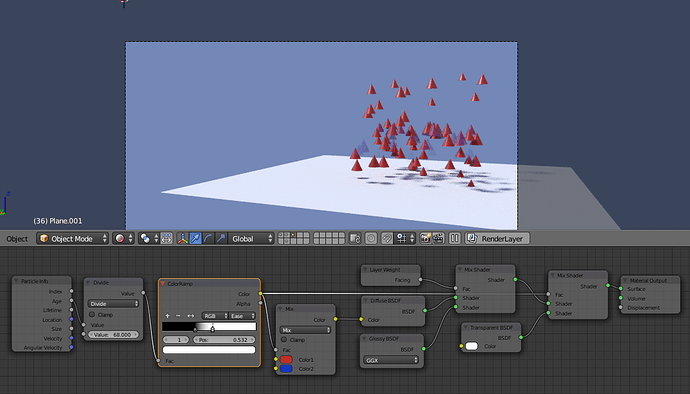 Thanks eppo, but this doesn’t work when I’ve got a mesh with particles attached to the faces. With the explode modifier the faces of the mesh can fly away. Just like in the tutorial from blenderdiplom.

In your example you have the particles replaced by an object, with me it’s not the case. Or am I missing something?
Hope this makes sence

Tricky one… Then you’re limited to what can be done using UVmap on Explode and mask image or blend texture. Image node output can be used to mix materials or colors. Created mapping coordinates can be additionally randomized using some node math if needed.
pretty much the same setup as it was in blenderdiplom tutorial.
To get transparency going you can reuse last Mix node’s setup in previous image; instead of Colorramp going into Mix Fac input connect Image texture node and use some ramp image or plug Blend texture node. You probably will have to tweak maping of blend textures.

Alternatively, use Cell fracture addon on your object/particle system and nodes from my previous post - then you will have particle objects (yes, you’re correct, i did use this).

Thanks for the tips, I’ll try them.