Fast macOS Blender rendering by connecting to a Windows/Linux PC 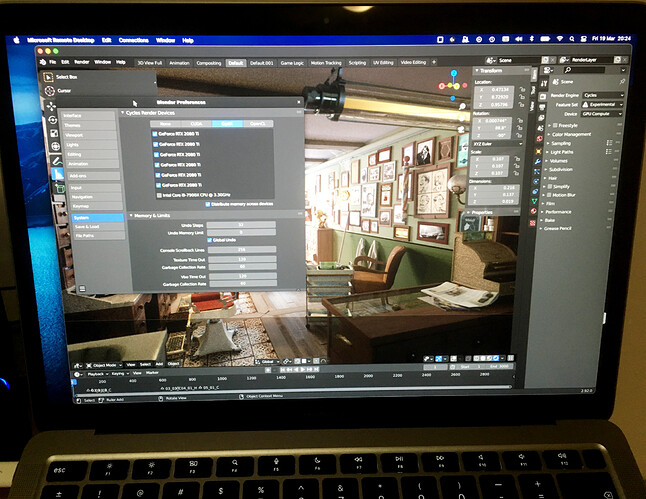 Awesome!!! This is eventually what I want to do…build a multi-card server at the house that I can connect with my M1; instead of talking to AWS servers.

So cool to see this running, and I may pick your brain on setup in the near future, if you don’t mind.

It works great as a render server over the network. However it is not suitable for everyday work in Blender (unless these are some minor works or amendments). It just lagging too much despite 10Gb connection. Perhaps it is a matter of some transmission tuning. It would be awesome to have this Blender setup always on the Mac screen. Unfortunately at the moment I have to jump to PC crap for Cycles jobs (screen and USB switch).
Of course, ask if you have any question.

My use case would be for a render server, mostly.
Thanks, and will do.

Interesting - how do you access the GPUs on a PC through Blender in an M1 Mac?

looks like hes just remoting into the machine, the m1 Mac isnt running anything other then windows Remote Desktop

Try using Parsec for the connection, it is optimised for low-latency (for gaming mainly, but it works great for Blender).

Mac isnt running anything other then windows Remote Desktop

At that point isn’t that kinda moot? I mean Blender uses its own OpenGL API to draw the GUI, which means that it looks identical no matter where it’s running since it doesn’t rely on each OS’s API’s to draw buttons, progress bars, window frames etc. For all intents and purposes, running Blender in full screen more on Windows, OS X or Linux should look and feel 100% identical so why even bother going through a Windows Remote Desktop on a Mac mini?

Interesting - how do you access the GPUs on a PC through Blender in an M1 Mac?

Try using Parsec for the connection, it is optimised for low-latency (for gaming mainly, but it works great for Blender).

I tried Parsec for Windows as well as many VNCs. Some works fine but only for low resolution. Unfortunately I can’t get it look and feel good enough for 4K.
Parsec is not available for Ubuntu 20.04. I can’t use Windows because NVLink does not work for more than 2 graphic cards. Also the Windows UI is terrible, but that’s a matter of taste of course.

At that point isn’t that kinda moot?

Blender is very important tool for me, however I spent most time at work using Apple Motion and some other Mac apps. It would be great to have Blender Cycles on a Mac screen (running smoothly and with good image quality) and not to have to switch to PC, as it is a waste of time nad annoying.
At present I use remote control just to rendering and progress view or eventually for some minor works. It is useful of course but for Cycles jobs I switch to Ubuntu PC.

I see the Microsoft Remote text now in the menu. That the Blender UI is like macOS threw me off.

This actually brought back attention to Apples Screen Sharing. I have an imac 27" and via the screen sharing I connected the macMini. Works 95% well.

I am not so lucky with collaboration of Mac and Windows over LAN.

Not perfect but simple file and disk access works reasonably.
But at which side I see whole Computers in Network or have to
connect by knowing name and Path is quite different between
which OS (Windows/Linux/MacOS) I am attempting from.

I even got Network Rendering running between “Workstation” PC
and “Modeling only” M1 Mac.
But with the result that there is so much overhead that it is faster
to just work and render on Ryzen PC than accessing its render slave
abilities from Mac.

More difficult with screensharing with included Apps.
No way for me from/to Linux,
Mac to Mac works great !,
from Mac to Windows screen, now way,
from Windows to Mac screen works - basically - but when I try
to switch to another “macSO Space” (=virtual desktop), Windows
screen sharing loses connection or freezes.

I tried some VNC Apps on all platforms but did not buy into
Apple Remote Desktop so far.

If that would work as reliably as on Mac to Mac, I would immediately
take away the monitor from my PC.

Yes, I agree Apple Screen Sharing is the best. I really don’t understand why the hell there is no option to have such quality connection between e.g. Mac and Linux.
Does anyone have an idea how to solve this issue?

Yes, I agree Apple Screen Sharing is the best. I really don’t understand why the hell there is no option to have such quality connection between e.g. Mac and Linux.
Does anyone have an idea how to solve this issue?

Wow the speed is mind blowing - I connected the macMini via ethernet and screenshare to an iMac via wifi. That is impressive. Obviously this is an intranet but man nice and smooth.

Finally I can park the macMini. Fricken amazing is also when you run an update to macOS you even see the update bar then the mac restarts and you log in again.

This is killer. This way I can also park it under the table or some where and then Sidecar the ipad when I need sculpting on Blender with a stylus.

This is killer. This way I can also park it under the table or some where and then Sidecar the ipad when I need sculpting on Blender with a stylus.

I’ve been curious about how well that works. Is there any lag at all between the iPad and Mac?

This is really based on your connection speed. If it is good it is very fluid.

I think a windows tablet has the advantage of running windows apps and having a touch screen but I hardly find the drawing experience being equal compared to the pencil. The stylus design makes a lot of difference.

I have pretty good internet and its extremely fluid. Its very nice opening a pdf, sending it to the iPad and taking notes, then sending it back and submitting it, apple did an excellent job with the integration

apple did an excellent job with the integration

That is very true - I also have AstroPad but SideCar is well spot on and full screen.

Just having a funny veritcal alignment issue. The cursor is around one inch below the stulys - must be a mapping bug.

I sold my Wacom stuff the parallax issue always drove me crazy and the Surface stylus is fine for basic tasks but when you want to tlt the pen etc to draw differently you quickly see the difference to the Apple pencil.

I would recommend maybe getting a fairly cheap Mac, and create or rent a render server. I thing someone here creates models on their m1 MacBook and then sends it to an was server to render it. You do need to remember that you won’t exactly get the best bang for the buck (for intel Macs at least) and that some software support will be lacking (lots of Autodesk stuff).