Hi everyone! im working on a slightly modified version of the fell beast in lord of the rings. i have just about finished the modelling and the rigging and now i need to give him some colour… thats easier said than done because i have given it some tries but i cant seem to get the right material settings. (its white now because its easier to see some of the details 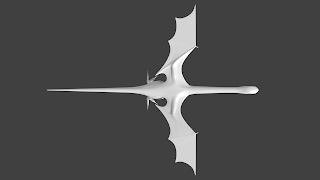 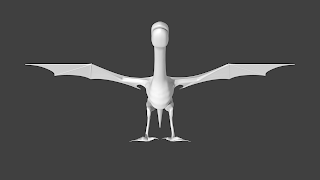 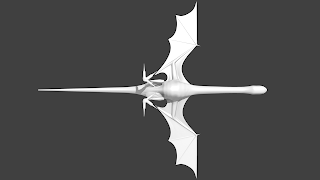 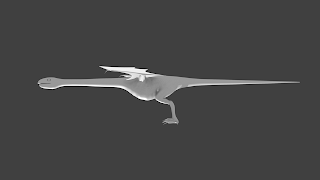 Tell me what you think of the model by all means and if you could give me some ideas for the material and textures that would be amazing (its not a complete replica so it doesnt have to be the same oily black as in the movies) all suggestions welcome!

theres a higher res image from the side here 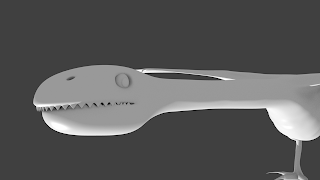 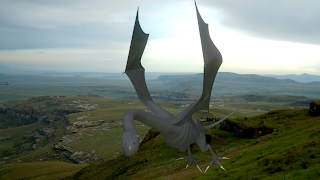 Is it meant to look that cute? The body looks rather realistic & reptile-ish, whereas the head makes you wanna hug it. :eyebrowlift2: You’re confusing my emotions^^ :spin:
Generally, I really like your last render, I just think it wouldn’t spread its toes like that while flyin’. Rather make a “fist” more or less, if ya know what I mean, like in this image (talkin’ 'bout the depicted bird of prey, of course):

But the other fella there resembles yours too, doesn’t it? Maybe it can serve you as inspiration.
Apart from that, I’m not really convinced by the composition U got there, yet. Guess you should either shift the beast ‘bout nearly halfway towards the left edge of the image, to balance it better with the hill in the foreground already drawin’/ dragin’ the viewers attention 2 the right. Another idea how to adress the composition-issue might be to have it fly a bit higher & stretch its neck rather 2 the left instead of havin’ it pointin’ its head directly towards the cam. Also you could simply add sometin’ else on the left part of the image, in the background. As a last thing ‘bout composition, I don’t think you shoud cut the tip of that wing. No really, don’t! Ever! Like in “never ever”!

Nice match lighting-wise, btw.
It depends a bit on what you make out of my composition-suggestions, but if you’d leave it as it is, keep in mind some quite heavy SSS on those wings, as well as some glow on ‘em.
I hope you don’t mind me tellin’ you “do this & that” 4 lines over lines, even more as I might have misstaken some basic things: Is it really supposed 2 be in flight? Or is it just about 2 lift off/doin’ a touchdown in the very moment you’re tryin’ 2 depict? In both cases, it’d need some cast shadow on the backgroundplate, of course, but I think you know that as well as me & just wanted 2 throw in some WIP that’s simply 2 early 4 such stuff?
Btw., I think its legs are quite a bit 2 thin, it probably wouldn’t be able 2 stand on those. On the other hand, it’s quite likley 2 be rather lightweight in relation to it’s overall size, compared 2 non-flyin’ dinosaurs, mammals and the-like. Maybe consult some references on that question, rather than blindly doin’ what the endlessly critisisin’ guy says. :yes:
In any case, it’s coming along niceley after all. Keep it up!
greetings, Kologe

thanks kologe! thats allot of information! hehe! the pic there i didnt work at all on the composition… it is kinda just to show where im at… the reason that i made him is so that i could practice some flying (wing) cycles and that is what i am doing now

heres one shot of him flying http://www.youtube.com/watch?v=eekpX-eT4mk and now i am working on hi flying and then landing on a tower… that shot is nearly done… just need to do all the camera work and then render… but i will probably have a link up for that sometime tomorrow evening

thanks for all your critique though! especially about the head, legs and feet… i will work some more on those soon… give his head some shape and maybe even some horns or something

All right. So it’s like I already more or less assumed it’d be: I was misstakin’ some rather “moodboard-ish”/“conceptart-ish” pic 4 an actual WIP.

But now I’m thinking your plans are by far more exciting than what i’d have expected. Now I want 2 see this finished even more than before. And yes, you can take this as a threat:evilgrin: (Just kidding)
Good start on the animation, maybe bend its wings a bit more still when it reaches the peak/valley of that oscillatin’ movement (of the wings), especially concearning the wing-tips, if the rig allows 4 that. Maybe a simple increase in amplitude of the respective oscillatin’ Ipo-curve might already do the job. I also suggest 2 add some non-repetitive more or less random movement of the tail, as if it was usin’ it to steer & ease out some squalls or the-like. But that’s somethin’ 2 B adressed later, I’d say (kinda depends on your workflow). Just suggestin’.
Btw., how did you do those wings? Any shrinkwarp involved? -Kinda looks like it. Sweet topology U got there in any case (as far as I can judge from the lil’ animation).
greetings, Kologe

thanks again! ye that animation was just one flap up and down and that just repeated… in the next video im positioning the bones for every flap…
yes… that tail is giving me a headache… its rigged with about 12 bones and then 1 ik at the tip to control it but it doesnt give as much control as i want it too… ill play with it some more…

ill have a look if i can make the tips of the wings flap a bit more though… do you mean when they reach the top or bottom? or both?

right… ive rendered another animation… its very far away from perfect but i thought that i would just upload it and see what u guys thought of it… so here it is http://www.youtube.com/watch?v=OmxTOZtcmY8

what do u think? there is still allot to do i know

My suggestions for improvement: Don’t move the camera too much when he is landing (if at all), it is very distracting that the horizont is flapping like his wings.
I agree with natholas that the toes should be curled inwards.
I like the shape of his head. I would only add small ears and maybe horns (or a single horn?) to make it look less like a serpent’s head.

I am looking forward to see this progressing. Keep going like this and it will be a nice animation.

ill have a look if i can make the tips of the wings flap a bit more though… do you mean when they reach the top or bottom? or both?

Originaly I meant both, judging from your new test, i’d say mostly when the wings reach the lowest point, but maybe it’s just the perspective foolin’ me (makin’ me see no more need 4 further changes of the upward-movement). But if you solve your probs with the tail, I’d say you’re on the right way (sounds like a stupid rhyme^^)!

The modeling and rigging both look quite nice for a start.

I say more detail because his head and most of his body looks like of basic as of now, maybe that will partly change when textures/normal maps are put on though.

thanks all for the positive replies

ill fix that.
@kologe yes i tried to make the wings flap a bit higher and lower and i think that it turned out pretty ok too…
@ acedragon i am actually really looking forward to texture him… ill probably spend a few hours in gimp to make him look good

and yes horns he will have!

ps. if anyone has any ideas or experience on how to rig a long tail or long neck and wouldnt mind telling me or uploading a pic or something that would be amazingly appreciated!

lol…
anyway here it is… 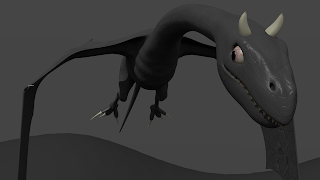 i am to have it done tomorrow… so keep an eye out for an update!

arggg!!! i just lost a load of work… i was adding the bottom part of the mouth and when i tried to weight paint it in it went wrong… again and again… so i tried redoing the auto weight paint and it messed it up really bad… and now no matter what i do it just keeps going wrong… 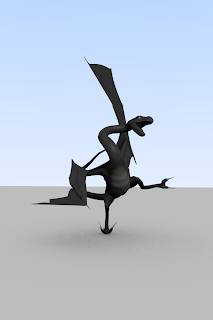