Hello.
This is my first try at making a base mesh. I’m chugging along at a decent pace but feel that something is not right in the neck, arm/arm pits area. Any sort of criticism would help a lot. 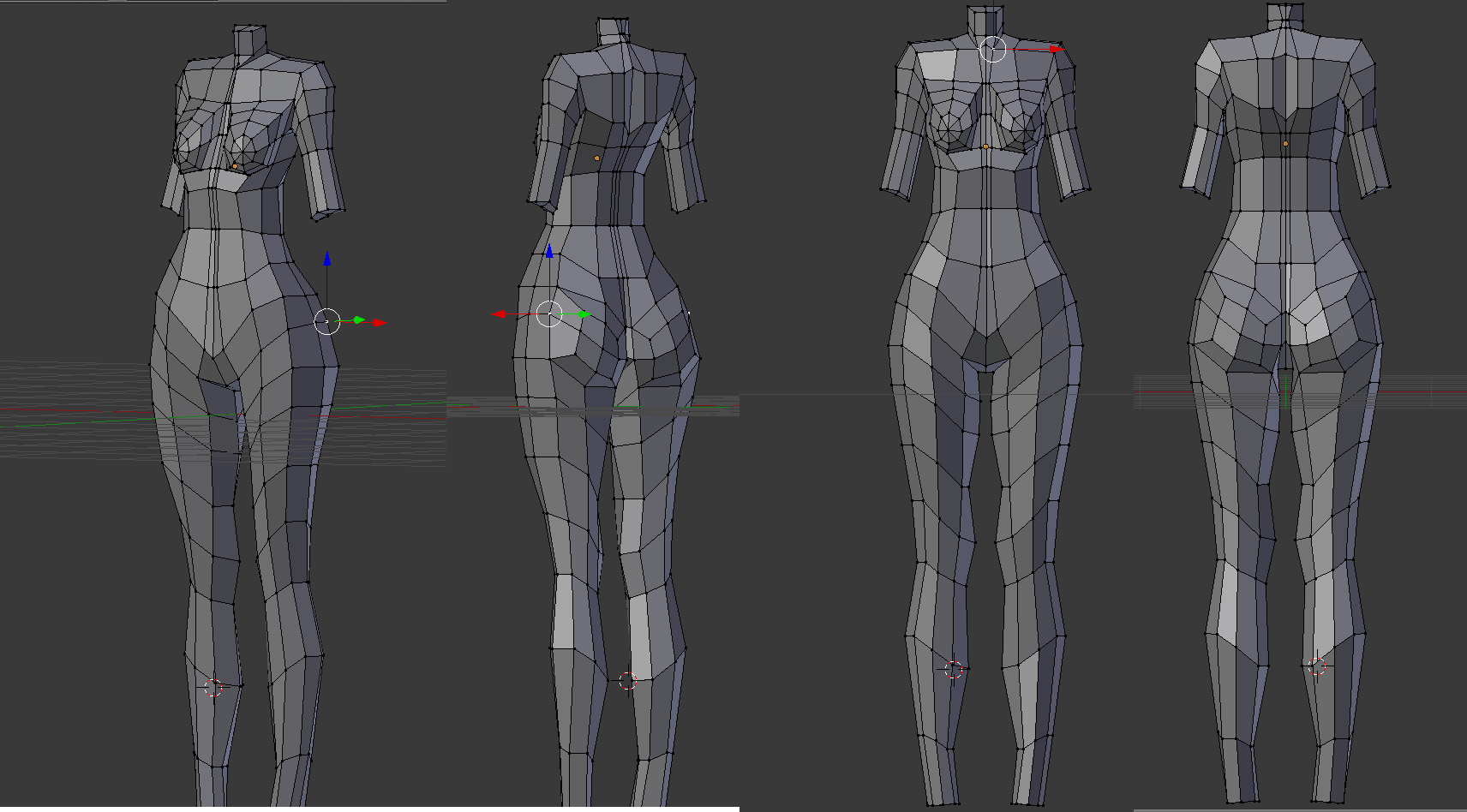 Hello.
This is my first try at making a base mesh. I’m chugging along at a decent pace but feel that something is not right in the neck, arm/arm pits area. Any sort of criticism would help a lot.

Is this for sculpting? I would work on more even distribution of faces in the abdominal area, and in the back of the neck the edges seem a bit pinched, if you get my meaning. But as a basemesh it does what it´s supposed to.
I´m no expert, of course

It starts from the top of the hips, the waist is to thin, then the shoulders are out of proportion, they should be wider, and yes the neck is way to small to be realistic.

Search golden mean or phi ratio for humans and you will get a lot of help with correct proportions, good luck.

the upper half looks to be about 1.3 X too small

I’m not all that clear on the concept of a “base mesh,” but I agree that both the topology (mesh structure) and proportions need a lot of work. The upper body seems too small compared to the width of the hips and the length of the legs. The knees seem entirely undefined. The current set of edge loops at the shoulder will make any posing problematic, as the arms seem to attach in the armpit area too far down the side of the torso. Also, this is not an ideal rest position pose, the arms should be held out from the body at about a 45 to 60 deg angle to make modeling under the arms easier and to place them at about a center point between minimum and maximum flex. The old “T-bone” pose should also be avoided for this reason, as the arms are raised farther than ideal for a center point of the flex range.

I find it helps to think of the edge loops in the model as the contour lines of a 3-dimensional map charting all the ups & downs & ins and outs of the human form. The best description is when these lines follow the contours economically, with minimal distance around a shape consistent with incorporating accurate structure. Thus the loops in the legs look to have too much slant for no obvious reason. Similarly, the three longitudinal loops at the body’s centerline are too closely spaced, not only a weak description of the contours they cross, but also problematic for building toward a sculptable base. Getting the mesh as regularly-spaced as possible is an important goal as the Subsurf and MultiRez modifiers will respond better to a regular structure.

Thanks for the input guys and gals! I think I might have to start again since I kinda went a little too far ahead to fix things in an optimal way. I had a image that I was using as a reference; an anime character. But I think you are right, it seemed really off and small at the top compared to the bottom half. Is there is particular edge loops that you guys follow or have a reference I could use. I’ve searched a lot for edge loops but it seems to be so much clashing info. I intended to make an anime character base mesh and get as much detail into it as I can before doing very light sculpting work, since I suck at sculpting.

Do you think these image reference might be better? 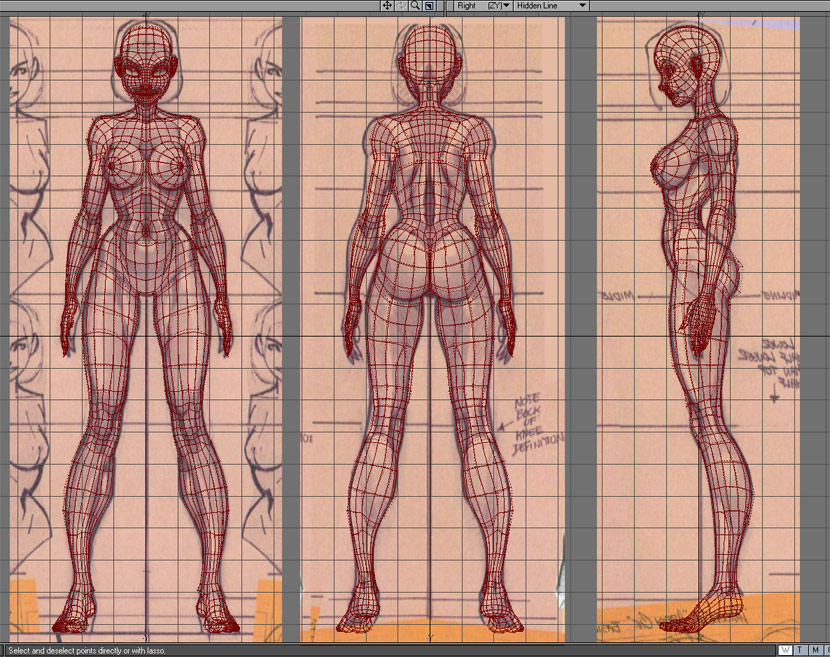 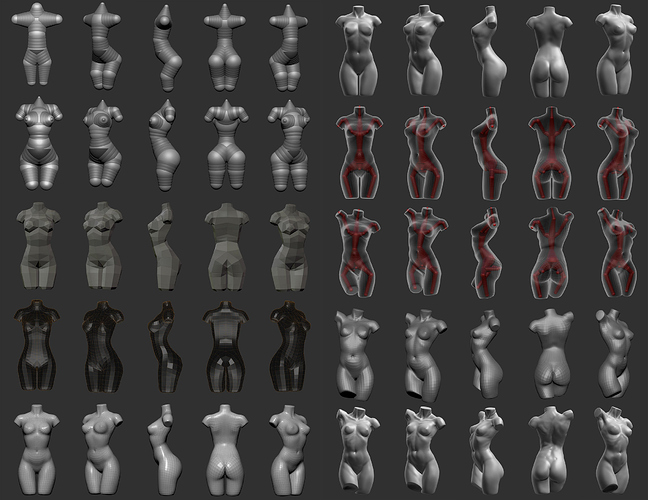 I don’t know if it is ideal, but I find that sculpt is a very nice way to start, much more organic, and flexible. Also anatomical knowledge is a nice thing to have hehe.
And of course the anime references, unless you are going for that is not ideal, the other references seam much more realistic.

I agree that the conventions anime uses (in its portrayal of women in particular) are less than ideal for learning about modeling and sculpting the human form. They are a significant deviation from actual norms, made for artistic reasons, and can lead to a poor foundation in proportions and typical anatomy. You need to learn stronger foundations before branching into specialized styles like anime.

There are large numbers of artistic anatomy refs available on the web, many of them classics and worthy of study. In almost all cases they deal with both proportion and anatomy, as these go hand-in-hand. But these can also be both idealized and generic, a set of “norms” that actual humans fit into only loosely except in fairly rare cases. So also start building a refs library of photos of humans in all their near-infinite variety. If you draw, make sure you draw lots of figure studies and anatomy studies. If there are life-drawing classes available, avail yourself of them if possible. As you study, keep practicing modeling, as you need familiarity with the tools. Don’t worry if things aren’t perfect, they rarely are even for the best modelers. Find & follow tutorials but do not believe any one contains all the answers. Learning to effectively model the human figure can be a lifelong endeavor in which learning is always a major factor.

That being said, the ortho drawing above (front, back & side views) has typical anime proportions, rather distorted by normal standards, but it also shows how edge loops can be used to economically describe the form’s surfaces. That subject (called topology) is very much worthy of study and refs like this can be used as sources for practice modeling, as long as you keep in mind that the overall proportions and shapes are highly stylized and exaggerated. Try & reproduce in a mesh what you see in the drawing. No need to do the entire mesh, either – do a leg, the torso (as the other images show), or an arm – practice on pieces until the tools become familiar enough to tackle the entire figure more confidently and intelligently. Train yourself with small successes so the bigger jobs aren’t as daunting.

Most of all, never give up on learning something new, even if it takes some effort to uncover it.

Thanks again everyone!
@chipmasque: I took everything you said on board and applied it and wow, I got results pretty quick!