I actually started this project on december of last year, but I’ve worked on it with huge pauses and gaps in between, but I’m taking it back again

Here’s a link to the original concept, I’m modeling the one on the left.

I intended to follow the reference as close as possible, but there were some parts that didnt make much sense, so I had to make those parts up.

Then, I got stuck, the arms make no sense at all here.
If you look at the reference, he has a shoulder-armour that looks linked to the chest, which would mean that he isnt able to lift his arms, not even for a T pose.
So I got stuck, thinking on how to fix this, and eventually forgot about it and drifted to other works.
Today, I opened it and I figured out a way to do it, so I did :):

Legs and torso are to bulky, look at the concept again, they are way thinner there.

You need to move the arms down a bit, its looking strange atm because they are that high.
Keep in mind that that guy must have a neck somewhere

And you might want to define the overall shape of the trousers a little bit more.

The pants are a placeholder, I plan to sculpt them to make the shape and add wrinkles:
Thanks for pointing the arm issue

Though before I move on, does anyone know any technique to ‘close’ the little gaps on the waist area?
It’s too high poly for me to edit freely, my computer goes to slow and I would never finish.

Update, first test for the sleeves… Looks really lowsy if you ask me… Maybe I should modify the concept again? 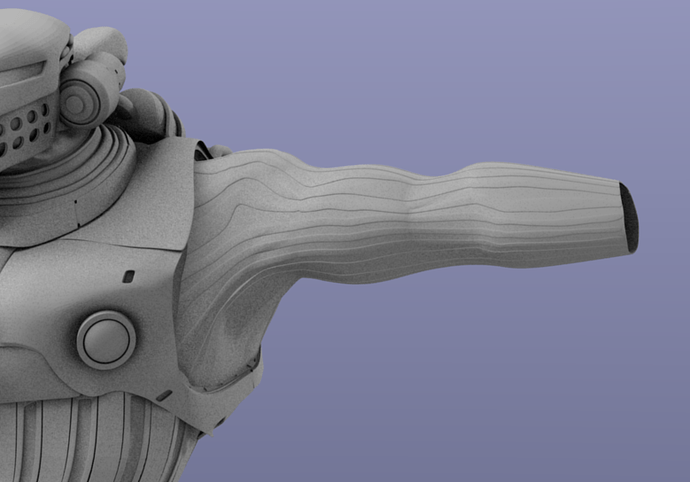 i would do the pattern on sleeves with a normal map rather than extruding your existing edge loops, or alternately try and smooth out the edge loops a bit if you really want it all to be modeled. but each to their own