I’ve been running into a problem with my composition setup…

Whenever I go through the setting up for my Jellyfish render, the image that goes through the viewer / compositor node, and seen in the background is shrunk from the initial image from the image input node. It’s only a basic start for the composition at the moment as I’m playing with things, and I’ve probably just messed up a setting somewhere…any ideas?

As you can see, the initial image has a group (school maybe?) of Jellyfish, but the output has only 2 on, and the lappets (tentacles) of another? If I don’t include the eclipse mask / Blur / Mix nodes, it works, so it’s something in there. I’ve messed with all the settings, and can’t seem to find it… 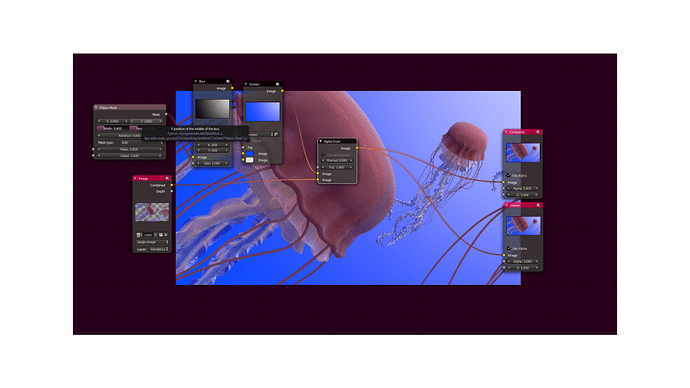 I think it might be something to do with the file perhaps, as I’ve just plugged in another image through the input node, and it’s zoomed out…is it something I’ve done when rendering the initial image?

Thank you for the help Richard Marklew!

The dimensions were both identical, but the inclusion of a scale node fixed it immediately.