Here is the finished (finally) scene. You may have seen earlier versions floating around threads in the focused critique section for the past while. Sorry its so small, but I couldn’t deal with longer rendertimes. By now of course, after doing this image, I know of ways that I could have done it better, but that’s life:rolleyes: . So here it is. 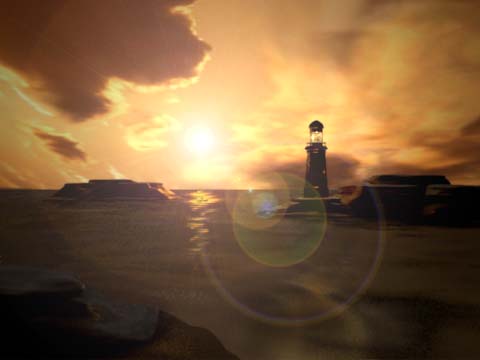 Damn, looks nice, I suggest to make a bigger render and submit it for the gallery.

I always loved lighthouses and this one is really cool! thumbs up!

BleedForMe: I may submit this http://blenderartists.org/forum/showthread.php?t=78206
to the gallery when it is finished. I have been working on making realistic lighthouses for a while now, and I believe my latest one (link above) will be the best. As for making a bigger render of this one…:o I dunno, it takes way too long! And I’ve already post-processed it. But thanx for the comments!

Wow, what a great image!

HEy!
I just became a memeber and im still a noob.

the picture looks AWSUM!!! did u make the water and rocks aswell or are the pics?

Yeah, very impressive! I love the lense flare + the colour is great.

That is one nice moody picture of sorts! Great work!

One crit: The water doesn’t look too much like water and the lighthouse is too small.

I find the lens flare disturbing… Aside this, great picture, with great colours and composition!

On the one hand, the choice to use lens-flare is a bit surprising … because a photographer would probably seek to avoid or minimize it … but, given that it is here, it can be accepted as an artistic choice. The lens flare is accurately and plausibly rendered.

So, as a deliberate artistic choice, does it have merit? Certainly. It conveys the fact that the camera is looking at an overwhelming source of light. It gives the viewer something to look at. It covers a few sins. It’s certainly a plausible choice that a photographer could make, especially if he knew that the film (remember “film?”), when developed, would not be all-white and ruined. It might not be a choice that a real-world photographer would make, for precisely that reason (4x5 sheet film ain’t cheap…) but if he did, a good version of the shot might look like this.

the scene looks great. kudos to you! I personally don’t like the lens flare though. Mostly because it has a blueish tint whereas the rest of the scene is red.

It also steals the focus away from the lighthouse, so i’m left just looking at the flare. Perhaps you could add it on a new layer in photoshop, fill it black, then add the flare and set the layer to “Screen”.

Then you could control the opacity of it and make it a bit less distracting. Or even play with the blend modes to make it blend with the scene better.

everything below the horizon is nice, everything above isn’t very good.

the clouds don’t fit in at all, the angle is totally wrong, and the lens flare just completely takes over the image.