This is my first attempt at animation, for which I used the CG Cookie flex rig. It’s based on the idea of a lecturer being asked a question, and being embarrassed that he doesn’t know the answer.

I would really appreciate some feedback - don’t worry, please be constructively harsh!

Also, many thanks to Jonathan Williamson and all those at CG Cookie for this amazing teaching tool!

Hi Tom!
I think it’s alright, but have one thing i’ve learned through… if i can. It’s not a critique, just a tip. Ithink that it needs a bit more dynamics inbetweens. When you look at it closely, you might see the keyed poses of whole body. If you can shuffle them and make them overlay each other result will surely be much more …“human like” ore let’s say “alive”.

If you use dopesheet in animation, i can show you what i mean

If you look at the dopesheet it is not a set of poses each for one frame but they overlay each other + have different length. From my point of view this is important.

But I like it really and please do not take it as an offence or something. Just sharing what I’ve experienced.

For inbetween dynamics, do you mean using the NLA with different action strips to create a layering of animation? I’ve added some blinking and breathing like that; here’s the screenshot: 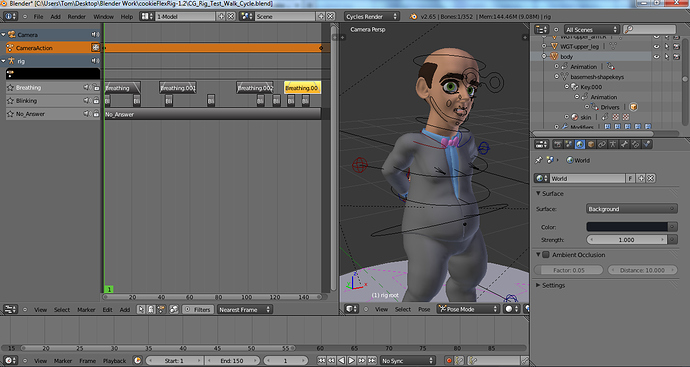 I draw a picture of that 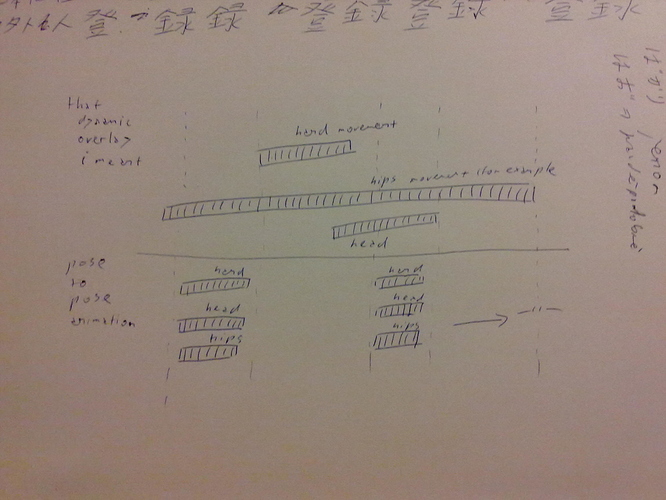 That blinking and breathing is really good, actually what i want to say is basicaly make it more messy. Put some chaos into that. Not to key a pose of a whole character, move 10 frames forward pose it etc… But make it asynchonous, make long arm swing and short… chew

A->C->B
From keyframe A to keyframe B through keyframe C. Basicaly you create those two poses and than enter an inbetween C. Using this, rather than A->B->C have really nice result, and it’s far more interesting to animate, because you are always surprised by the result

But again, it’s great Tom, far more succesful in first animation than i was…

(and sorry for the image, it was quite in hurry)

The arms were done using IK - where should there be more arcs?

Also, didn’t know about using FK when the arm is resting on something (makes sense now you’ve pointed it out to me) - thanks!

I see what you’re saying - I’ll try to add some extra stuff, to keep the whole thing moving!

If I may make a suggestion it would be to stick with the poses you have (I think they’re fine for a start) and work on your timing and breakdowns. Layering is valid and the above comments make some good points; but this method also introduces a number of complications which you may want to avoid for a simple action like this, especially if you’re learning. All your overlap and cushioning can be addressed simply with good breakdowns.

Also the IK FK distinction is important… (It seems we have a typo above, as IK is the method most often employed if you have fixed extremities.) The key principle to understand is what happens with your inbetweens when using these methods. If you look at the picture below, both armatures have been keyed to the same position at keys 1 and 2, however the inbetweens are vastly different. IK will move in a straight line, whereas FK will produce an arc. In addition, IK also causes the bone higher up the chain to initially move backwards to allow the bone at the end of the chain to follow the direct path prescribed, and the spacing is now radically different from the FK case. The upshot is use whichever you like, but be aware that IK will generally be more work if you wish to create eccentric actions, and can affect several bones at a time. Although in CG animation inbetweens are automated, this just means you have to be doubly sure you know what is going to happen. 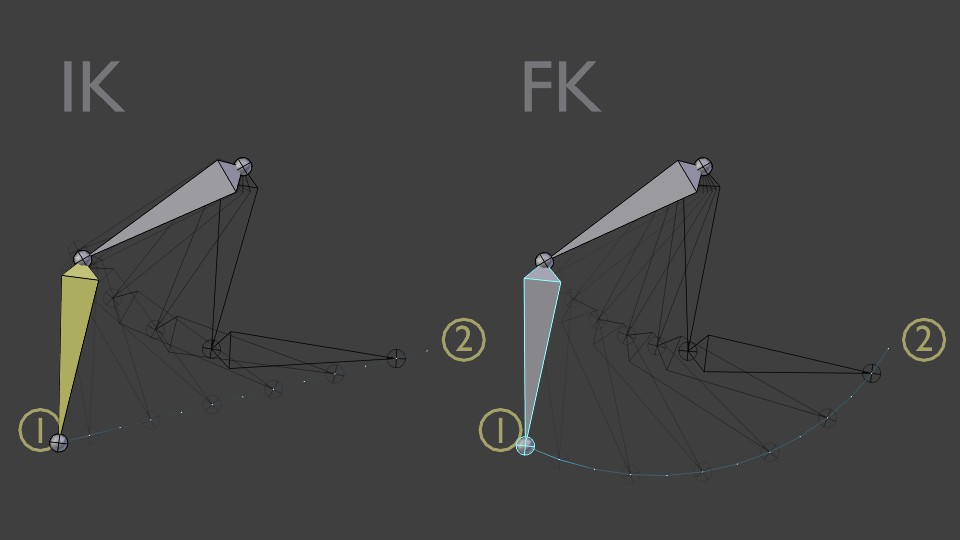 Anyway, good work and my best advice is to keep it simple!

The arms were done using IK - where should there be more arcs?

Also, didn’t know about using FK when the arm is resting on something (makes sense now you’ve pointed it out to me) - thanks!

Bender007 was right – I typo’d – use FK for arms with free motion, IK when they are fixed to a wall or table or something solid

Sorry for the messup –

So much helpful information here - thanks very much, I’ll definitely be putting to good practice :yes:!