Jesse Statue Preview 2.png1692×432 827 KB
I’ve been modeling in Blender for a few years but been avoiding doing realistic human designs because it’s so easy to notice when little details are wrong. I’ve mostly focused on cartoony character designs, but I’m starting to get over my fears and practice sculpting from art model photos.

Here are my first few attempts: 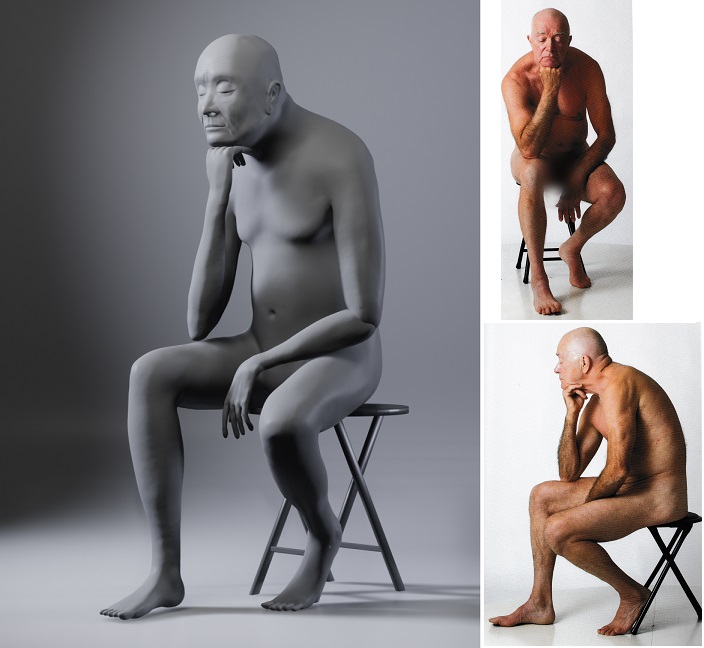 Any thoughts on what I’ve got so far?

Hey @Komojo. Congratulations, you have already got past your fear.

Here’s some critique that i can give to you :
For the first picture : from the front the face and the head looks nice. But from the side, the corner of jaw looks too low, as it is almost as low as the chin. I always made the jaw as low as the middle between the lips and the chin. The proportion of the upper arm is also off, deltoid and bicep has to be 50:50 for realistic design. Clavicular bone has to be straight and has subtle s curve, yours looks like c curve and it is also distracting. The other part of the body are just mushy especially the foot, i don’t feel that there is a bone there.

For the second picture : It’s quite different from the previous one. The previous one just has to looks masculine so the muscle has to be clearly defined. This has to be baggy because the fat tissue that the model has. So far you just defined the basic form, the head and face also looks better here, doesn’t have the previous issue. But you still miss the baggy tissue part. The feet is also good enough here.

For the third picture : Probably the best, some part of the muscle and fat is clearly defined. but proportion of the torso is just too long. Based on my measurement, it’s 3,5 head long, make it shorter. The feet is off probably too long and the toe is just too small.

For general : I suggest you start training to make this thing separately. I mean just head, just torso or just anything. I’m confdent that it’s gonna much better.

Thanks for taking the time to write all that! I will definitely take it to heart when I do the next one.