for a few years ago I started to learn blender because I am a hobby sountrack composer who wanted to get experience in composing music for motion pictures. It is very difficult to find good footage without music so I decided to learn 3D stuff in blender to make my own films. Meanwhile it is another great hobby and it’s time to try a bigger project.
I sculpted my first character and I want to make a short trailer with him. At the moment I work on the uv mapping of the retopology model. Next step is texturing… Also started to think about a little story.
I don’t know whether I can manage that. Maybe I will fail, maybe not. I am curious about the future

I will add updates here… 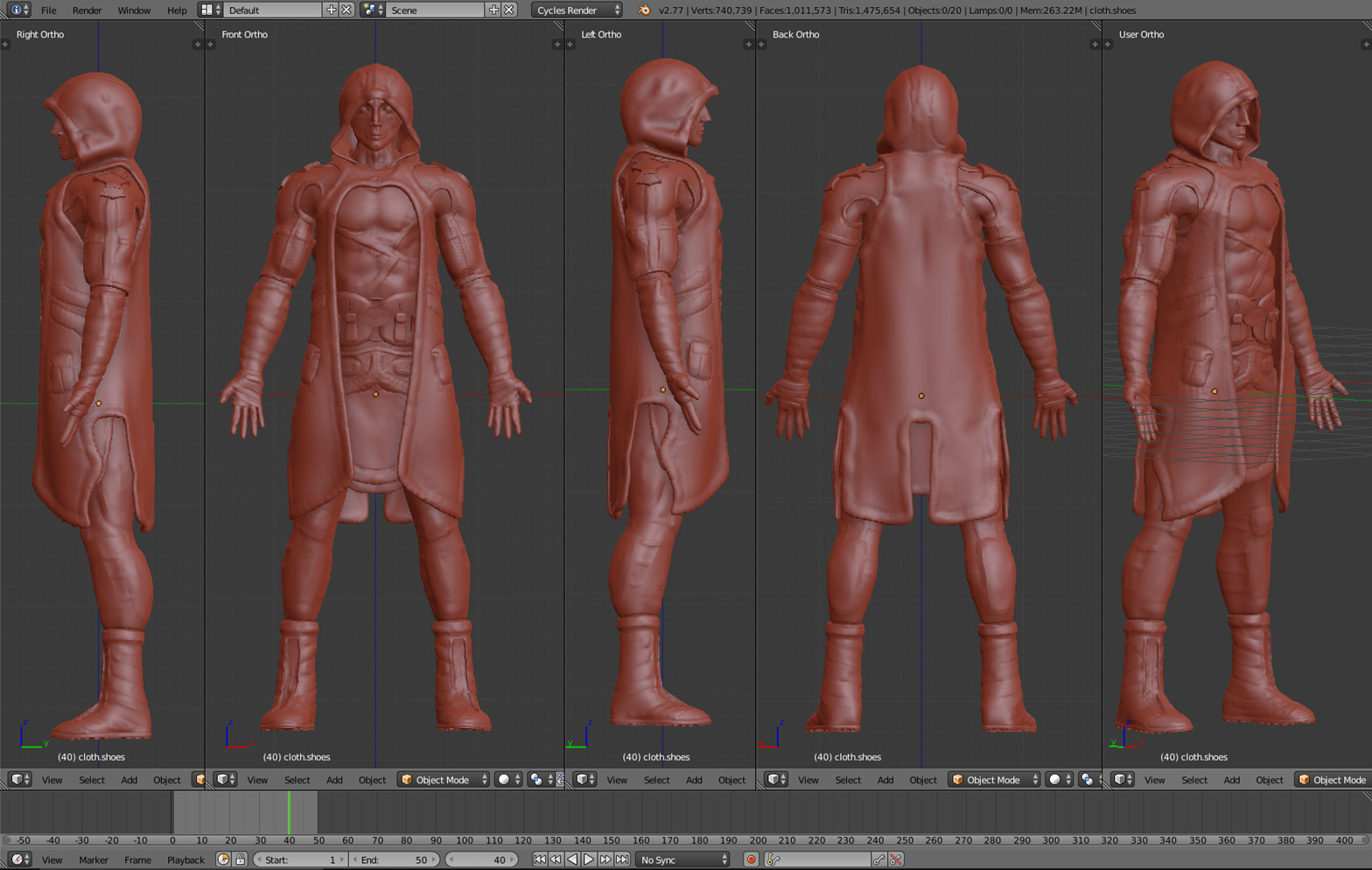 Looks great! Very excited to see more. Best advice I have is even if you do fail, at least you can say you tried. So keep at it! 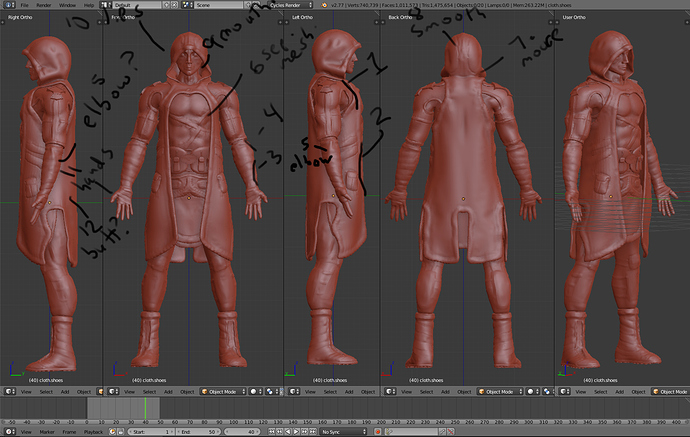 I am not great with anatomy, but this is what intuitively comes to mind.

This looks good. I’m in the same boat as you, but in reverse! I’m making music for my series. I wonder where this character will take you.

Well done! How long did it take you to make? I am still not used to soft surface modeling but i’ve used Zbrush for that in the past. Blender works fine but my computer is getting too week for it so I’ve kept focusing on hard surface and armor modeling.

Thanks for all your replys and very constructive criticism. At this point I have to say I can’t include all your tips. Especially at my first post because I had already made the retopology model as I said. Besides it’s my first character so I have to accept that not all things will be perfect. Anyway… I will try my best and if I can I will implement your tips. Otherwise I will keep it in mind for my future characters.

At the moment I am working on the texture painting of the body. (By the way: Currently I am very busy but I will keep it going.)
Last week I baked the normal maps. (left) I had some problem with that although I play around with the ray distance for a long time. :-/
Finally I painted over the wrong parts with Gimp. It’s not perfect but I hope you can’t see it later.
For some tests I added a very simple basic material. (middle) But there I detected some mistakes on the edges. (right) When I use the diffuse shader I haven’t got this problems. Maybe it’s an shading/IOR error of the principle shader? Has anybody an idea? 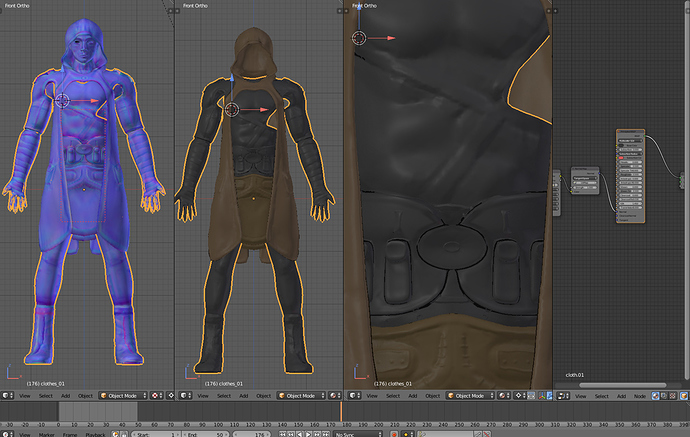 @Taumich: maybe 2 or 3 weeks. Don’t remember. I made it before I had the idea to make a little film. Here is the next status: The character is finish. In the video you can see a short turntable. I changed some things because I had problems. For example the cloth simulation was very difficult because of the thickness. Now I removed the thickness, anyway…

While rendering this video I saw the power of denoisng at the first time. Very happy about this feature!

At next I want to do some test animations. For that I will try to use motion capturing with the Microsoft Kinect because I haven’t got much experience in animating. I want to buy this camera soon. So for the next weeks I have to do a break here. Hopefully this will work. If not, I can’t continue working on this project.

I like your work! That is why I have a few questions for you.

Which era is your story set in? Medieval? futuristic? it can’t be modern as we don’t wear clothes like that.

If your era is futuristic then I have nothing to add except that this is a very nice piece of work. But if your era is medieval, then there are a few issues with the concept behind those clothes.

From a practical point of view, that part of exposed skin under the armpit doesn’t make much sense. It doesn’t protect from the cold, and any region that is in direct contact with your ribs is sensible to cold. Especially in a medieval setting, where catching a cold is very much akin to death - no medication back then.

Also, if the setting is medieval, and if your character is going to fight, then those exposed armpits are also a huge issue. Leather armors were often worn, as they give a somewhat better protection than simple clothing. Padded armor is the next better, followed by iron chainmail and the best being a combination of three layers of armor (padded armor, chainmail and plate armor). Your character is wearing leather armor, which means he is more likely to be a sneaky type or a ranger type. Sneaky types wearing leather armor didn’t really exist, they’d be too obvious and it would beat the purpose. But let’s say this is a somewhat fantasy setting, like in a novel, so it’s okay. But then, to come back to the point. Armpits are very sensible parts and one stab there can reach the axillary artery, which is a big and very important artery. If that one is stabbed, then you’re dead for sure. So nobody would leave their armpit that exposed. Armpits have always been the weakness of armors, you can’t protect it without harming your mobility and fighting ability. But at least, they’ll try to hide it and protect it with a little something. I rambled a lot, sorry about that. Good luck for your animated project =)

Hi! that’s a very unique motivation for such a project

I really like the expression of that model. Tough I really suggest to fix at least the problem he has with the proportions of his hands. They are, in all respects, painfully small. Probably you can fix that even without tampering to much with the actual topology. Just play around with the armature. Just -S-cale the wrist bone (about factor 1.5 - 1.7 I would suggest). That might fix that problem instantly. You only would have to deal with the mesh a little bit in the arm/wrist area of the mesh. If you are still afraid to mix anything up you can just add a shape key for that

@Shenfara: The era will be medieval. So you are absolutely right. When I created the cloth I only considered the look. But the genre will be fantasy… everything is possible there

@kyomotion: I will try this out.

Thanks for your feedback!

While I have to wait for the microsoft kinect I decided to continue working on the environment. So next status is coming soon…

Here is the first asset. I will create a few more buildings to generate a little city with them. 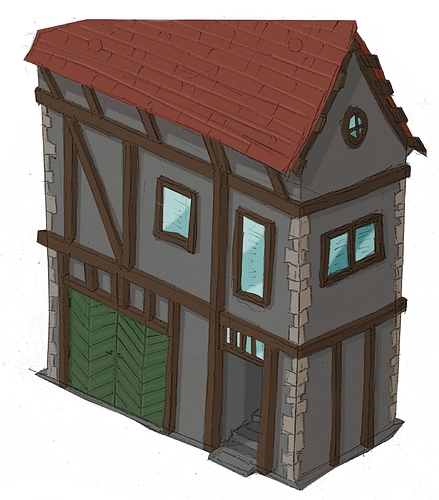 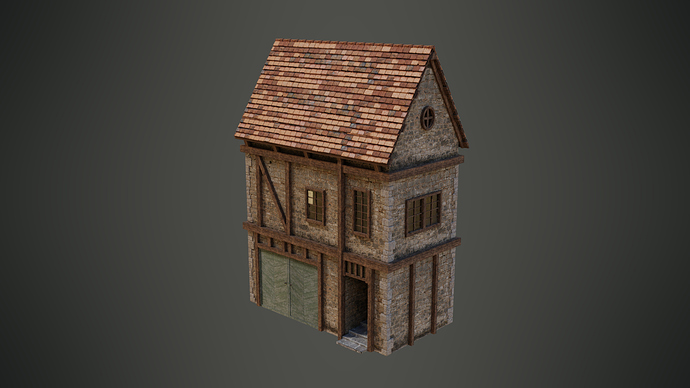 Timelapse of the creation: