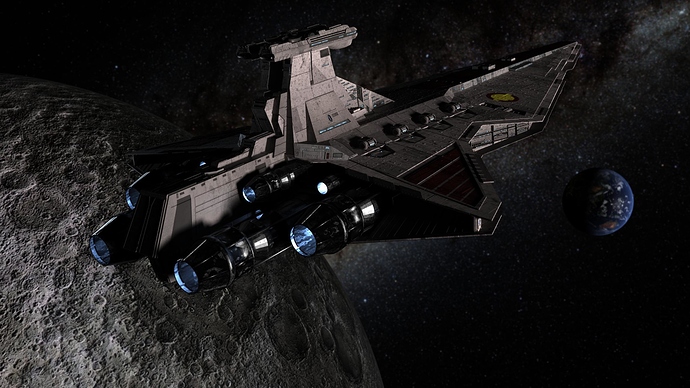 Enjoy Star Wars and Sci-Fi so decided to try my hand at creating a Star Destroyer as my first project in Blender after watching a YouTube tutorial by CG Geek. I thought how hard could it be to learn Blender and try a variation on the classic one by trying to model one from the prequels… Several weeks later, I now feel that I am in a position to look for feedback on lighting and materials and other thoughts. I used some stock metal texture and grunge textures from a texture website and a couple of spots used the displacement map created in the Star Destroyer texture, but all of the hull plate displacement maps, otherwise were created in Photoshop. Textures for the Moon, Earth and the galaxy are from NASA and the ESO.

In particular, I would appreciated and comments or recommendations on improving texturing of the displacement maps. I am having issues with creating displacement maps that was using 50% grey as a neutral height. I was using 8-bit RGB png files with Hex 808080 as the baseline but needed to subtract about .4 to .45 to get the displacement to map properly. There was still some wonkiness though as you can see in the engines that light is leaking through.

I think I am not looking at any major changes to the model, but would appreciate any comments that could improve the look without fundamentally altering it. I’m not particularly interested in how well it aligns to the actual Star Destroyer in Episode 3 as I became aware of some glaring differences once I moved from basing the model from a design that I found on Deviantart to watching the opening sequence of Episode 3 over and over again.

Hi hemeac, this is great model you created there! First of all I’ll suggest you to watch this video:


In my opinion the background is really distracting the eye away from the model, because there is to much noise. And I also would suggest you to try some more camera angles. You maybe could add some compositing effects like glare, blur and/or chromatic aberration.
And are you already using a HDRI for lighting?
Hope you don’t get me wrong and the critic isn’t to harsh, but I think there still is so much potential in this!!! Cheers!
Regono (Regono) April 26, 2018, 10:05am #3

WOW! First model as in first time touching a 3d program? If so that is very impressive. But yeah the composition could be better.

Hi AndréDe and Regono, thanks on your comments on composition. I had seen that video by Gleb and liked what he had to say about the distribution of shapes. Composition is something that is still very much a work in progress for me and can see what you mean that the moon craters can be very distracting. This was even a bit toned down as I had hidden our “galactic center” from view. The camera angle was also a bit of an accident as that was the camera angle that I had been using as I was rendering out earlier versions of the ship so I could have a static comparison before I realized I could have multiple cameras! I’ve been watching through the Space VFX series and working through some procedural planet so may try and incorporate some of that in my next pass.

I haven’t used and HDRIs yet as I couldn’t find any free ones that were spaced based and wasn’t ready to commit to purchasing Blender Guru’s Pro-Lighting Skies at the moment.