Setting in inflow velicity works great! It solves the problem of a water “step” down.

Though as a feature request I would suggest being able to set a fixed boundary condition. I guess this would also be useful if you want to (seemlessly) connect your fluid dynamics body to another water body!

Another question though, when I do this, it generates an enormous amount of bubbles in the water source. This leaves the rest of the fluid domain a bit empty when it comes to particles (due to particle limit). Any ideas how to solve this? 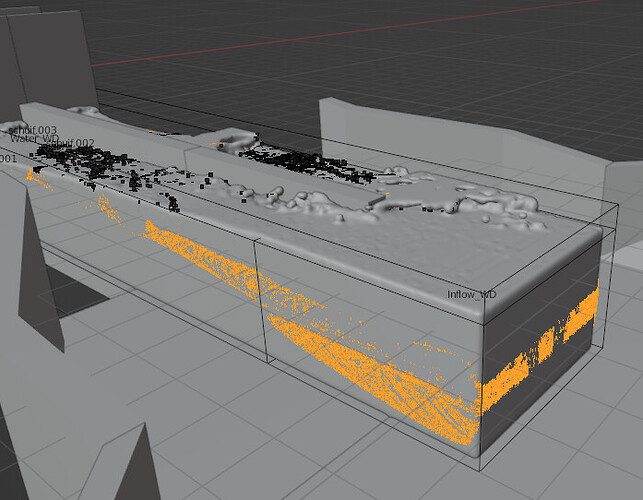 The Domain > Whitewater Settings > Turbulence Emission Rate value is related to how many bubbles will be generated (bubbles are generated in areas of higher turbulence). Lowering this value should help reduce the amount of bubbles generated.

I’m currently away from my development system at the moment, but I’ll take a closer look at that error message and get back to you as soon as I can. At first glance, it looks like the cache/flipstats.data file had become corrupted somehow.

Thank you again! These insane amounts of bubbles that are generated make it also a bit difficult for rendering (it just stops on “initializing”, but I fixed it by just not rendering the bubbles (foam is most important anyway), which is a good enough of a fix for now with deadlines and all. Because of the default particle limit of 12 million, it also seems it is lacking foam at other places, it just looks a bit unnatural, but it’ll do for now!
Lowering the turbulence emission rate also sounds like the bubbles in other places are also reduced, which doesn’t seem like the fix I’m looking for

Somehow the water source is very turbulent, which I don’t understand as it just emits water with the same flow rate as it flows through the culvert system…

I guess this could all be solved if (feature request alert, but see also my previous post) there could be a fixed boundary condition.

When you have gravity set to its default value and have an inflow object with the velocity values set to 0 and no target object the fluid drips off of the inflow object.

What happens when you have gravity set to 0? For the inflow objects I have both Add Object Velocity to Inflow and Constrain Fluid Velocity checked. And the velocity values above are 0.

There doesn’t seem to be any additional fluid coming into the simulation. And the Flip Fluid Stats says that the surface size is the same. I have the surface tension set to 5.

Question 1 is why isn’t any fluid being added when gravity is 0?

Question 2 is my inflow object is a sphere. How could I set it up so that the fluid increases making the sphere of water grow in size?

Hi, I’m new to both Blender and Flip Fluids. I’m working my way thru the video tutorials (they’re great by the way) and the Wiki and this thread. I see a lot of discussions about motion blur and workarounds noted as no longer being applicable. Is there somewhere with a “current status” or a video for motion blur as of Blender 3.2 and FF 1.4? Thanks! 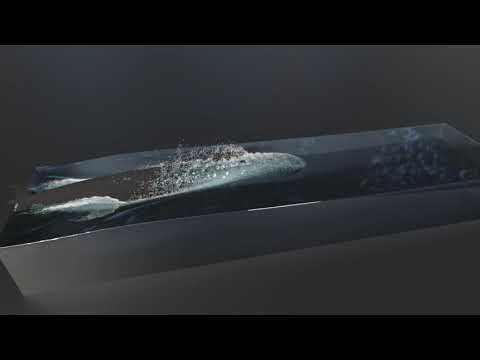 Hi, check out this topic for the current status and related resources: Motion Blur Support.

Tip: there is an operator in the sidebar menu to help automatically set up everything required for motion blur rendering: FLIP Fluids > Geometry Node Tools > Initialize Motion Blur.

Update on our current support status:

Just letting anyone know that any unsanswered questions or issues in this thread or elsewhere have not been forgotten.

We are currently in an unusually busy period of support and development and support request turnaround is taking longer than usual. We are triaging issues and requests and will get back to you as soon as we can, likely by the end of this week.

More information on support guidelines can be found here

Thanks, I will check both those links. Is command line rendering still recommended if we want to try it out?

Yes, command line rendering will be necessary in order to prevent crashes when using these features. The bug that causes render crashes (T88811) will need to be fixed before attributes and motion blur can be rendered reliably outside of cmd.

Somehow the water source is very turbulent, which I don’t understand as it just emits water with the same flow rate as it flows through the culvert system…

Hi, my apologies for the late response. I just had a chance to take a look into the code a check out what is actually happening with Constrain Fluid Velocity option.

This option doesn’t actually truly constrain the fluid to a single velocity within the inflow, it’s more of a ‘hint’ for the simulator to keep velocities near this value. Ultimately, the solver can override the final velocity. What I think is happening, is due to a side effect of how the solving method works, velocities within the inflow will tend to oscillate around the target velocity. This will lead to turbulence.

Lowering the turbulence emission rate also sounds like the bubbles in other places are also reduced, which doesn’t seem like the fix I’m looking for

Something that is more of an advance fix could be to adjust the minimum turbulence threshold in the advanced whitewater properties (Min/Max Turbulence). For almost all situations this value does not need to be adjusted, but may help in this situation.

These insane amounts of bubbles that are generated make it also a bit difficult for rendering (it just stops on “initializing”, but I fixed it by just not rendering the bubbles (foam is most important anyway), which is a good enough of a fix for now with deadlines and all.

By default, particles can take a very long time to initialize for render. If bubbles are not needed in the render, disabling from the render like you have is a good idea (or lowering the display percentage).

If you’re open to using more experimental features in Blender 3.1 or later, point cloud objects are much more efficient for rendering in both speed and memory usage. In many cases, you can render 10x the amount of particles in the same time while using less memory and are quick to initialize. We have some example scenes to show how to convert the whitewater objects to pointclouds (more info).

Hi, my apologies for the late reply. I just had a chance to take a look into this, but I might not be fully understanding the problem, so let me know if I’ve misunderstood something. Attaching a .blend file could help.

Question 1 is why isn’t any fluid being added when gravity is 0?

Question 2 is my inflow object is a sphere. How could I set it up so that the fluid increases making the sphere of water grow in size?

When an inflow is submerged, such as inside of a sphere, it will not be able to create more liquid. Only push around and recirculate the liquid if the Constrain Fluid Velocity option is checked. This will cause the sphere not to grow in size.

There is a solution, but it may not be suitable in all effects. You would need to create a ‘pipe’ obstacle object inside of the sphere in order to effectively displace liquid and create new liquid (See this topic). This works sort of a like a pump. Of course, this isn’t a great solution of the sphere is required to be transparent as you would see the pipe-like obstacle.

Is there actually some one who does fluid sim in Blender professional and that you can hire?
I just wonder because despite all the knowledge here, some stuff seems to be difficult on a higher quality level.

Thats example is done with flip fluids?
(Now I see, I googled manta flow… sorry, but flip Fluids are cool too, just wonder how this works there.)

There alot of great work of artist being shared on Flip fluid Twitter , maybe you could reach one there. Also , the example is done on Flip fluid, it is an example demonstrating the new color mixing feature of the release 1.4 (release notes).

Is there a way to smooth this stair step other than going to an insane resolution? Increasing the fluid surface mesh subdivision just subdivides each step level, but the levels stay the same. It’s a simple box rotated so when it drops the fluid creates a wave. Blender 3.2.0, FF 1.4.0, Mac. 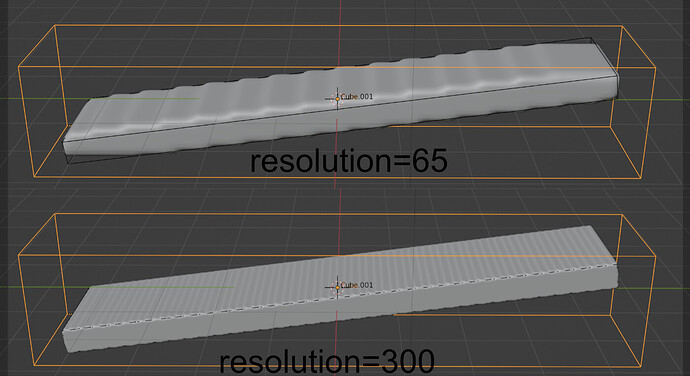 Hi, the stairstepping artifacts are a side effect of the simulation grid. Fluid objects are initialized by converting the mesh to voxels and due to this, stairstepping can be apparent in objects that are curved or not aligned to the grid. 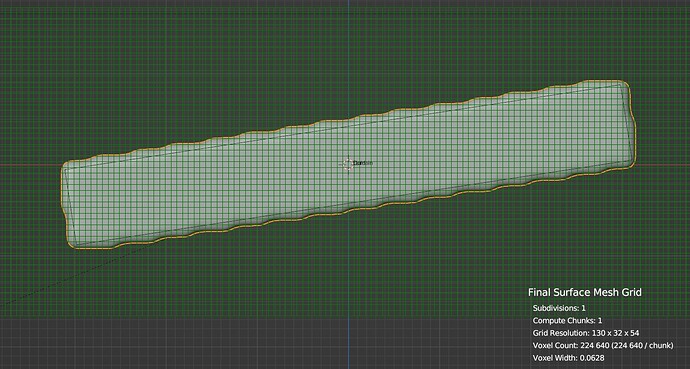 At the moment there is not a way to avoid this in the addon.

Something that can help is to increase the amount of smoothing on the fluid fluid surface in the smooth modifier:

OK, thanks for confirming this. It also explains another test I did with an invisible cylindrical obstacle that had a similar problem.

Our 4th yearly development video is now online! This video covers some of the new features added to the addon over the past year, including attributes and motion blur.

Thank you for supporting our development project!

- Ryan and Dennis of the FLIP Fluids Addon Development Team

In this simulation it looks like it’s using additive colors instead of subtractive, with all of the white. I have mixing turned off. 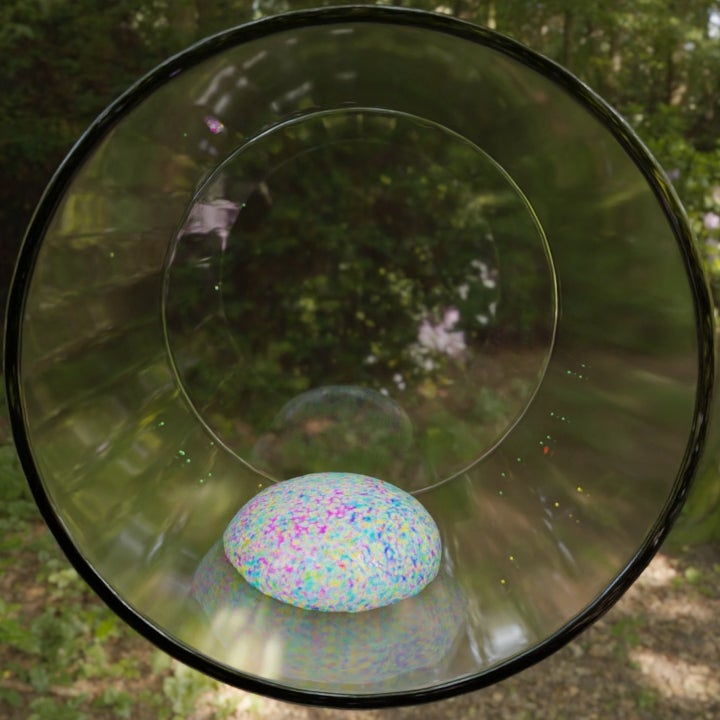 In this single frame I had mixing turned on and I’ve hidden the glass container and it looks to me like it’s going to white. 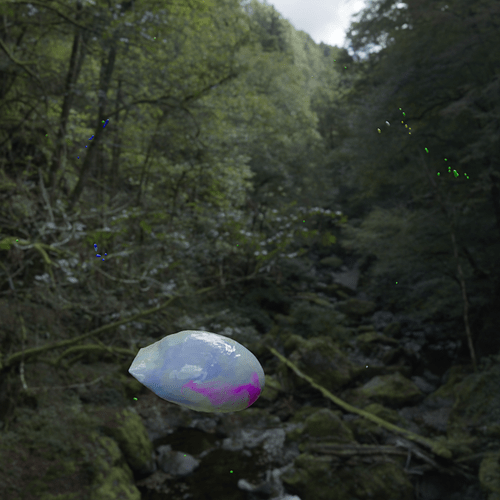 Shouldn’t it be using subtractive? Or is it, and I’m confused?

Enable Mixing
Simulate basic color mixing. If enabled, particles will absorb color attributes from nearby particles. If disabled, particles will hold a static color value that does not change.
Notes: This feature mixes colors using RGB additive blending, which is not physically accurate. Due to this, colors may not mix accurately compared to real-life color mixing such as paints. For example, mixing blue and yellow paint results in a green tone, but with RGB additive mixing this results in a shade of grey. RGB mixing can still produce acceptable results if the selected colors are closer or next to each other on the color wheel, such as Red/Orange/Yellow or Blue/Light-Blue. Colors that are on opposite sides will not mix well and will average to the center of the wheel to result in a shade of grey.
We are looking at solutions for physically accurate color blending and this will arrive in a later update .

Rather than use subtractive blending (blue+yellow=black), we’re going to be using a physically based color blending solution (blue+yellow=green) and are working on integrating this into the simulator, but more on this development later.

Here is an early test with additive RGB on the left and improved solution on the right:

Not perfect yet, still some bugs to work out.