Another quick abstract scene I created with nothing specific in mind apart from the wallpaper format, just getting all crazy with modifiers. Because these models itself are so simple, it allowed me to focus more on composition and mood.
I’m always surprise what a huge difference bashing some google images and painting lighting in photoshop can make

Tell me what you think please. 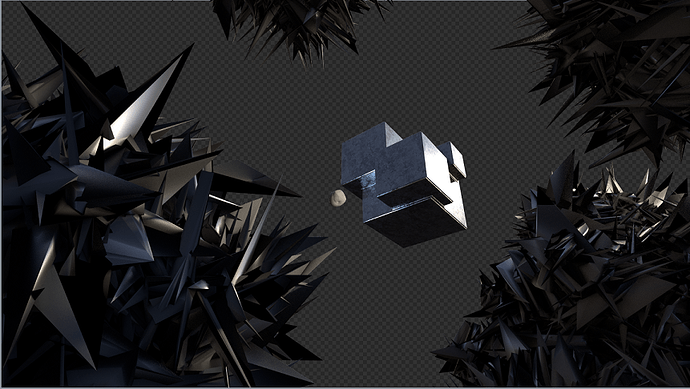 Wow. That’s great. i love the dramatic lighting and effects.
Is that obtained with a displace mod and cloud texture? Anyway, I’m quite fond of it.

Thanks! VoxelHound, the lensflare boosts the image to the JJ Abrahams level

Yeah, its simple polypheres with a few displace mods, the last ones using a noise texture which gives this stretched poly effect. It was more of an accident, but I thought it looked pretty interesting.

Thanks Iatch, abstract things are cool and pretty fun to make indeed. I dont think that there are any certain methods for composition or something, I just keep rearranging elements until I like them. In this image, I wanted to have strong focal point, so I arranged the displaced spheres around a point which is a little off center to make the composition less symmetrical. I also tried to make their placement follow a spiral shape, which didnt really work at at the end, but was worth a try.
One thing to keep in mind is that your focal point should stand out as much as possible from the rest of the scene. Here, the contrast between the spiky, random, dirty forms in the foreground and the controlled and clean shapes of the cube really make the difference.
The mood just started to come together when I began with post pro and dropped in a sky background. That gave me a feel for where I wanted to go with the image, so I rendered out another version with an orange backlight and screened that on top of the existing render, masking out parts I didnt want. From that point on it was just a matter of reworking the light and colors of the scene using soft brushes and soft light or overlay blending modes.
A few months ago I started watching the LevelUp streams, which are informative and very entertaining at the same time, and the most important thing I learned from these is paying attentions to the values of the image. You can check these by adding a HueSaturationValue adjustment layer on the top of the layer stack and desaturating the image completely. A very common thing to do is keeping the foreground quite dark and building up brightness and contrast the closer to your focal point you are, so I often go in with black or white on an overlay layer, which allows for easy value fixing.
I am not the best in all this stuff, this is just what I learned on the way and isnt probably the best way to do it. So I really recommend the composition videos by Matt Kohr on CtrlPaint, his teaching style is amazing and everything just makes so much SENSE

Cripe. That was a good response. I can see there are technicals as well as intuition in it.

I’m really a programmer but in the last few months I’ve begun to embrace the idea that I’m an artist and making what I would call art regardless of if it’s ‘good’ or not. Now having successfully convinced myself I’m an artist, it’s time to level up and learn to make ‘good’ art.