For PCs without OpenCL support (Blender 2.75)

I’ve seen sparse information on this particular issue in other places, but no reference to it here, so I figure I’d post it here. Odds are though, most everyone here has OpenCL support so this is a non-issue. There is apparently a bug that will crash Blender on a PC that doesn’t support OpenCL. From what I know, you can still launch, but crashes occur when you attempt to switch to the Cycles engine, or access the System tab in User Preferences, regardless of whether you intended to use the GPU or the CPU for rendering. The workaround for this is to switch off the openCL test in the command line, then launch it from the same command line. Bit of a pain, but this can be automated via a batch script.

Note: I take absolutely no credit for this. All I seek to do is to make the information more readily available for less experienced users.

In the second line, you will need to get the path to the directory for Blender.exe. This isn’t always needed depending on where the directory is, but it allows the command line to locate the .exe that will be accessed. For most people, the line will probably be this:

…and finally, for the third line:

After that, you will save the file to the desktop as a .bat file. In my case, I named it Blender_Open.bat. Then you will click on the .bat file like how you would normally with Blender on the desktop. If successful, it will bypass the opencl test and launch Blender with everything sans gpu rendering in working order. You will need to open your .blend files from inside Blender itself however.

Hopefully, this helps that random individual in need. I doubt anyone with a modern system will have this issue though, especially the serious users, but college students and such on older systems may find this useful. Example script below to show what it looks like. 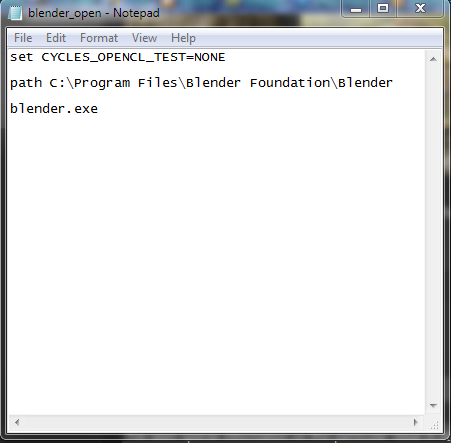 Wait… blender has OpenCL support now? I thought it only had CUDA support.
That would explain why I get crashes since the 2.75 update, at least if this also applies to linux (the log didn’t hint at it, only stating the following)

Failed to open BO for returned DRI2 buffer (1366x749, dri2 back buffer, named 6).
This is likely a bug in the X Server that will lead to a crash soon.

I’d wager BO stands for buffer object, it could also of course be an X server bug but it’s reasonably likely it could be a bug in blender as well.
it only happens in render view in cycles, whether I press render or if I go into viewport render or if I make a new material which has to render its little preview sphere and only occasionally, 2.74 runs fine… 2.75a might work or might not.