Just want to ask if you know of any good free 3D painting software like Substance Painter or Mari? I want to do texturing for games.

Thanks for moving it!

I don’t know of any free software that does 3D painting, except Blender. The cheapest route is to purchase an edu licence for 3D-Coat, it’s $99 and sometimes cheaper when it’s on sale. 3D-Coat complements Blender really well and does PBR texturing, sculpting, and retopo. If you can afford $20 a month, you could just get Substance on their indi license.

CrackArt is currently in Beta stage, but in order to provide more functionality while it’s being tested, the team has designed a series of productivity (functionality) goals thoughout the Beta and Beta stages.

The first productivity goals, Texture Baking and 3D Paint, will allow artists to import 3D scenes into CrackArt and create textures. This will allow artists to test CrackArt in a production environment while developers focus on functionality without worrying about scene file compatibility, which is one of the areas that needs stronger testing.

URL removed because the domain is no longer active

You may look at PixaFlux. It is a new free texturing app. Recently added to its tool set a node for producing ‘dirt and decay’ maps too (a feature of central importance in such apps). Below is the link to its site and a link to a discussion about it in the present forum: Hello, We’re happy to announce a new Beta version of PixaFlux. For the past 6 months we have been upgrading PixaFlux from a node based image editor into a powerful PBR Texture Composer. These are some of the features we have added recently: ...

awesome. Does it have symmetry/mirror tool? thank you 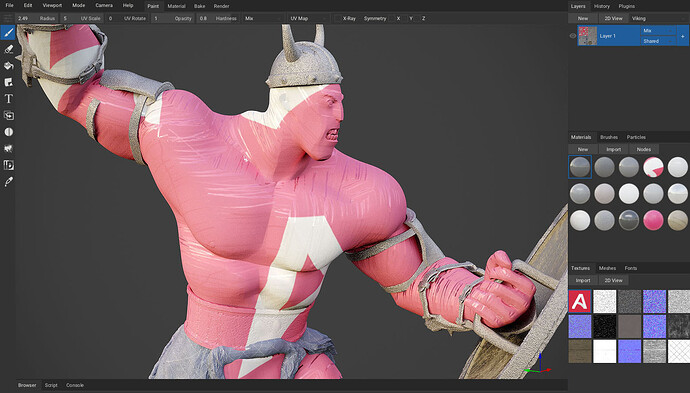 ArmorPaint is a software designed for physically-based texture painting.