I believe I’ve seen people ask for such a thing in the past. Here is a full anatomy model that is freely available. It comes in just over 930 separate .obj files and the lower res version comes in at just over 4 million polys

From the link above 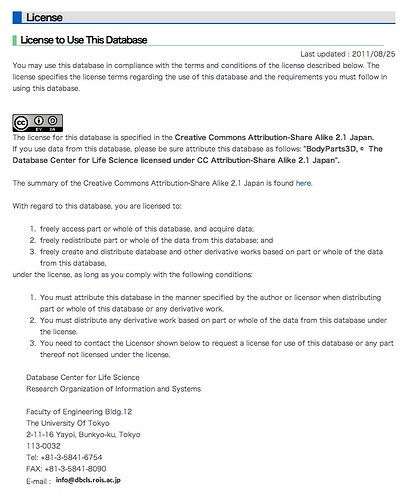 That thing is HUGE! The model zip file that is 99% reduced is still 128MB

That thing is HUGE! The model zip file that is 99% reduced is still 128MB 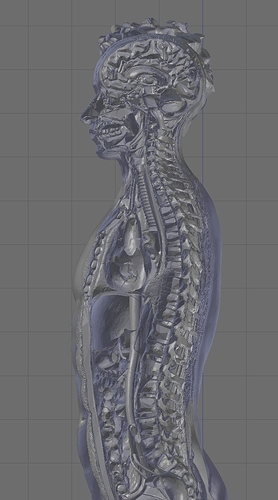 thanks for the Link. It’s Huge

Got so excited by this I forgot to check if it had been posted already. Sorry!
This is quite awesome reference indeed.

thx, Richard Marklew, but how do I load them all at once in Blender? It seems only one import of obj is allowed inside Blender.
I tried to load all obj’s in Zbrush with subtool master, but it won’t work - no error, no nothing (well it works on some parts, but searching for broken ones manually is just too much work).

I used zbrush . Import one obj then used subtool master to load in the others. I then merged the subtools into one and exported to .obj with the groups option enabled so when imported into blender each of those original subtools comes in as its separate object

Now someone needs to fully rig it.

This is a great set of human anatomy structures! Thanks!

But I have a problem with it: I’m trying to use it to model a 3d brain, but after importing just the brain structures, I get two separate groups of brain structures, moved away from one another in space, and one group is “shrunk” in scale in comparison to the other group, which is making them impossible to actually use.

If you were to, instead, (after <shift> select the .obj import script), actually SELECT the desired directory, then it shows all the files in that directory, as if to select ONE of them, or TRY to select them all (won’t work!), and nothing I tried from that point worked to load any files, which is why I eventually tried TYPING the desired directory into the lower field, which did work.

Did YOU get any such result when you imported the files???

You can download the full model as a blend file here https://drive.google.com/open?id=0BznKZxoP1i3jcnFaR1c4cW83Y0U&authuser=0 140 MB

Here’s a script if anyone wants to import a large number of obj files. Change the basedir variable to the path of the folder containing the files.

My 4Gb of RAM are just capable of the low-res version. And is suposedly only 1% of the high-res.

I’m not sure how, but I did get the .blend into 2.49b with 2gigs; but now I’m wondering if there is some way to chop off the body from the neck down, so I could have just the head, from which I might associate the named parts from the compositesPartList.txt file. Or, are the parts names (well, the number names, like BPxx, or FMAxxxx) included somewhere in the blend and I missed them?

Or cause all objects within a bounded area to be selected, so I could know which meshes aren’t in the head area?

There are multiple objects in the blend file. They are not named since I couldn’t be bothered naming each of the hundreds of objects.
You can append a group of objects, if they are not the right ones delete them and import another lot until you have all the parts you want.

Yeah, there are a lot of them, aren’t there!

Originally I wrote a program to run through the composites.txt file and selectivly replace the BP & FMA numbered file name with the anatomical name from that list, but that won’t work with the mesh names, since there’s no correlation between them.

But I think I like your suggestion, it sounds better than trying to select body objects one at a time directly from the 3d view, since that goes real slow on my system; selecting from the outline list works much faster, though I’m not yet familiar with how append works.

So, thanks, I’ll give append a try!

(edit) ok, append works for me, though it’s laborious and, I discovered, somewhat prone to error on my part for really small parts, of which there are a lot! So I’m wondering if there’s a way to:

1.select some particular object at about neck height, (mesh 116 is ok), and get its z-location, and then
2.write a script that would delete any object with less than that z-value for its location?