Great app. Thanks for all your work.

there is other free : http://awesomebump.besaba.com/
helpful to new news…

I used Gimp plugin for this kind of work, but now this will speed up my process

And your Normalmap Generator v 0.4.0 work fine on my Win7 64 with ‘drag&drop’.
I have old PC and this is good peace of soft for my hobbyist toolbox.

Thanks for your work and sharing with us.

For all “Awesomebump” look awesome, but need Graphic Card with OpenGL 3.30 and above support)

works like a charm. Thanks very much for its investment

I implemented a new gaussian blur filter for the displacement map generator.
It is slightly faster than the old box filter and looks much better.
So far no new binaries, I want to solve some other issues first.

I’ve been using this generator almost exclusively for a while now. Love it a lot. Thanks for sharing.

That’ great! Thanks for sharing BYOB

Can now set custom colors for the user interface: 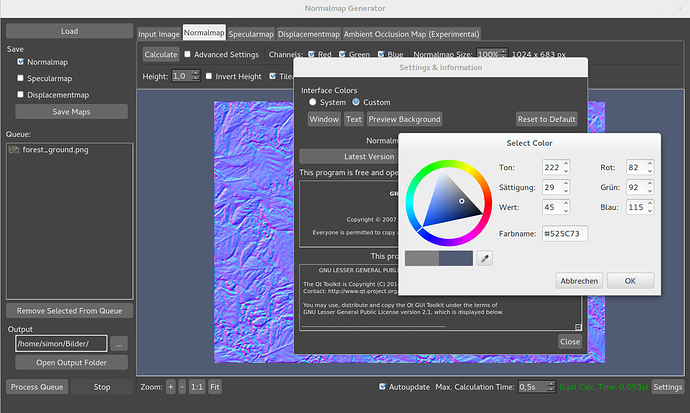 I finally took the time to look into cross-compiling and it worked quite nicely.
So there’s now a Windows 32bit binary available with the following changes:

@B.Y.O.B.
Your normal map tool is by far the best free stand-alone generator I’ve ever tried.
(AwesomeBump’s interface is unusable. xNormal feels like it’s forever stuck in the nineties…)

If you’re reading this and you still intend to continue developing this tool, please have a good look at this online generator:
https://cpetry.github.io/NormalMap-Online/

Apart from your incredible “keep large detail” feature which I absolutely love, Normal Map Online has all the features that your generator is still missing. Basically, all you need to do is to copy them one by one (and improve if possible).

Two minor bugs I found in your tool:

Thanks for your feedback guys, glad to hear my tool is useful.
Over the last days I made some minor code improvements which resulted in small performance gain and smaller memory footprint.
So far only Windows binaries up, as my Linux Qt build environment is completely messed up. I hate compiling.

- smooth and precise sliders(!!) for everything

Yes, the UI definitely needs a redesign. Too many buttons thrown in in a random fashion. Not surprising since this is basically an in-house-tool (for me alone).

This was requested by others, too. It’s a good idea and I’ll take a look how this could be implemented with Qt, but it is not top priority for me as the rendered result is what counts, and so far all these previews were rather far from a rendered result in my experience.

I never used AO maps myself so far, so this is also low priority for me. But it’s an entry in the bug tracker.

- Using “Save Maps” and then double-clicking on a texture does not overwrite it, but instead creates (a) new file(s) called for example: test_normal_normal.png. Maybe files shouldn’t be visible in this explorer window at all, since the user is only meant to choose a target folder.

I use it like this: load a map, generate the maps I want, then click save and leave the name as it is. The generated maps are then saved (or overwritten) with their respective suffix, like _normal, _spec etc.
I should make this clear in the UI somehow or do as you suggest and only display a folder selector, not a file selector dialogue. And I should probably show a warning before overwriting anything

- Every time you press “process queue” a slash is added at the end of the output path.

Heh, funny. I’ll look into it.

Just wanted to chime in and say “thank you” for this normal map generator. I use Photoline’s external app link, with which I can send layers of my textures to your tool, process them, and save in an output folder. Works really well - your generator accepts the images, and it makes quick work of texture conversions.

By the way, I noticed the output is 8bit per channel only? Is 16bpc possible as well?

By the way, I noticed the output is 8bit per channel only? Is 16bpc possible as well?

I’m using Qt’s QImage for image loading, storing and saving, and unfortunately it seems like it does not support 16 bit images.
I would have to use a different framework to be able to support 16 bit or higher.
I can take a look how much work that would be.
Normalmaps usually don’t need this much precision (after my experience), but for spec- and displacementmaps this would be a great feature indeed.

ps: A small tutorial are appreciate too, beginners will like it

Thank you for your contribution to the community. This tool is great.

the development stalled for a long time, but a few weeks ago I was contacted by Nikita on github who wrote a patch for this program. He added an OpenGL 3D preview window, even with tesselation support!
I uploaded a release that you can test here: https://github.com/Theverat/NormalmapGenerator/releases/tag/v0.4.5_beta

Note that this feature was not tested much, so there might be bugs to discover.
If you find a bug, please open a bug report in our issue tracker on github: https://github.com/Theverat/NormalmapGenerator/issues 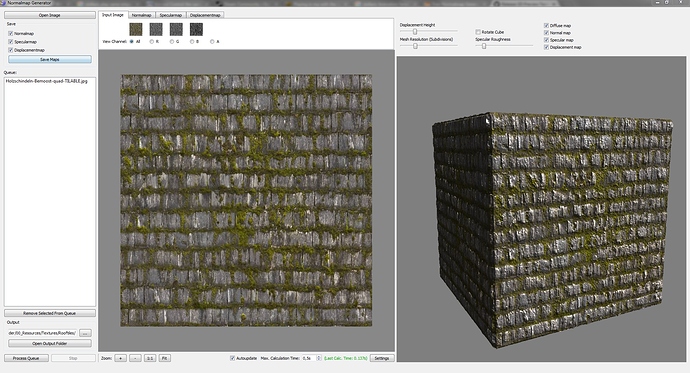 thanks,very nice addition.specular map’s influence is not seen in 3d view,is it yet to be implemented?(win 64bit)

Hi, I would like to test the beta version but Windows 10 delete my file all the time once it’s downloaded ?

It writes there is trojan …