hi,
I just started testing Clarisse n its amazing capabilities using heavy geometry as reference in its scene n rendering very fast.
Is there any other open source software like blender or other that can handle heavy geometry with ease for lighitng and rendering…

There is Unreal V currently in Beta if you want to use that (assuming you have a GPU and machine capable of supporting the new Nanite and Lumen features. I guess you can see the code, but I wouldn’t call it open-source – unless “open-source” is your code word for “free” in which case it is.

Otherwise, Houdini with USD is much more capable of dealing with large scenes, you can get the Indie version for $280/year which isn’t free but it’s fairly inexpensive considering what you get.

I wouldn’t hold my breath.

If you look at the types of images that are published in the Blender Artists Gallery, you’ll see the type of work that most Blender users tend to gravitate toward, and for that type of thing Blender is fine.

Something like Clarisse is really only necessary when you’re working on truly massive scale scenes, like James Cameron or Marvel type of stuff.

Having said that, I do think that Blender needs to improve the way it handles instances, especially now that Geometry Nodes are likely going to make people want to instance all sorts of stuff.

The latest asset creation pipeline topic hints at some “possible” alternative of some sort.

PS: this is my own interpretation of the message, and might be completely wrong.

idk what else it could mean. 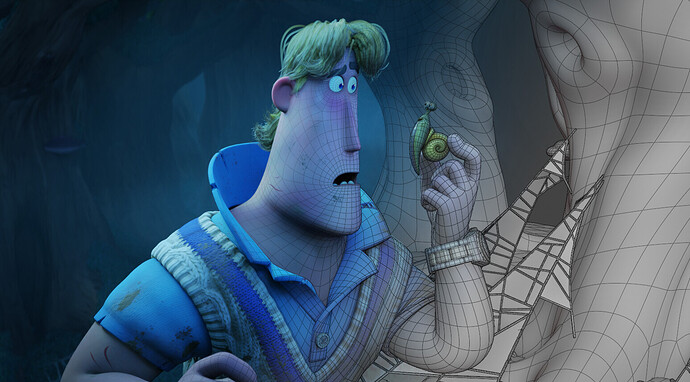 Pablo Dobarro shares an outline of the design for a new modern asset creation pipeline to be developed during the following years.

I wouldn’t read too much into it. “As high as possible” ceiling could be pretty low compared to Clarrise. We simply don’t know yet what is possible after optimization and how long it’ll take.

You’re probably setting up yourself for a disappointment expecting too much from this.

I’d also love to see more performance in Blender. Yet the road map to achieve this is not clear so far.

I’m optimistic ^^, following the Cycles X teaser, ppl, weren’t expecting much, and got blown away by the results, thinking it would be just an announcement of the new cycles dev, and even the most optimistic of them (me included) were expecting an extra feature to vanilla cycles at best.

if blender somehow manages to handle high poly data as proxy container as clarisse does then it would be a game changer. and clarisse is also writtenin python so it may be possible in future.

and clarisse is also writtenin python so it may be possible in future.

Neither Blender or Clarisse are written in Python.

As I stated previously, I don’t think the majority of Blender users are working with the type of massive scenes that Clarisse was designed for. I feel that any resources to try and make Blender more appealing to large studio VFX houses is not a particularly smart strategy.

Do I think that Blender needs massive optimizations when it comes to how it handles geometry and instancing? Of course, at the moment it can become borderline unusable very quickly. Do I think it needs to compete with Clarisse or even Houdini or Unreal? No, I think the Blender user base would be better served by the BF putting their limited resources into features and improvements that a larger amount of users would benefit from.

As I stated previously, I don’t think the majority of Blender users are working with the type of massive scenes that Clarisse was designed for.

Since Blender can not handle such massive scenes it seems obvious that zero Blender users are working with these kinds of scenes. Unless they heavily optimize which costs a lot of time.
However, if Blender had the ability then a lot of Blender users would start doing it.

I don’t know much about Clarisse but their example on their web site demonstrating memory efficiency has 50k Objects. My current project which is not particularily large and rather low budget (just around 6000€ - 7000€ for the entire 3D part) has 40K objects.

Now, this runs in Blender but only pretty bad. I have to optimize the scene with lots of instancing, heavy use of asset linking and so on. This whole optimization process eats up about a third of the budget.
If I could simply throw large amounts of polys and objects at Blender (which appears to be possible with Clarisse) I could save 30%.

And these kinds of projects are not rare. Visualizing CAD geometry (cars, engines, industrial machines, industrial robots and stuff like that) all are poly- and object count intensive because they contain every little detail down to the threads of tiny screws. And threads are poly intensive. And machines have lots of screws. And threaded nuts. And springs. And plenty of other stuff.

You don’t need Clarisse-like functionality in Blender for anything that you describe. You just need Blender not to be so spectacularly bad at handling what I would describe are fairly average real-world scenarios.

Also, you can’t talk about 40K objects without specifying the size of each object. If all you’re doing is instancing 40K cubes with 6 polys then even Blender can probably handle it. What Clarisse does is instance 40K trees each 1.5M polys without breaking a sweat.

Also, you can’t talk about 40K objects without specifying the size of each object. If all you’re doing is instancing 40K cubes with 6 polys then even Blender can probably handle it. What Clarisse does is instance 40K trees each 1.5M polys without breaking a sweat.

Oh, Blender can instance 40k trees with 1.5 million polys each just fine. That is a solved problem and has been for ages. Even realtime engines can do that.

The thing with CAD geometry is that it is often imported as unique geometry, meaning that even if tons of
12K screws are the same they are still unique objects and it is very time consuming to tell Blender to make instances out of them.
So if Blender could just handle large unique geometry sets (which is how I understand the proposed CAD mode) that would be fantastic.

@cbibci
Have you looked at Gaffer? Its open source and has been used on a couple of big movies.
https://www.gafferhq.org/

Something like Clarisse is really only necessary when you’re working on truly massive scale scenes, like James Cameron or Marvel type of stuff.

Nope. Clarisse has demonstrated very clearly that it is very useful for single artists too.
This was done by a single artist:

Sure, for huge VFX scenes its pretty much a necessity to have a tool like Clarisse or Katana, otherwise it wouldn’t work at all, but the good thing about Clarisse is that it enables a single artist or a very small team to create huge scenes by themself.
Especially if you deal with nature.
If you look closely, it shows that there are 571 Million objects in the scene with 997 Billion primitives.

As I stated previously, I don’t think the majority of Blender users are working with the type of massive scenes that Clarisse was designed for.

Because they can’t. The question is would they want to? And the answer is YES, obviously.

I have to optimize the scene with lots of instancing, heavy use of asset linking and so on. This whole optimization process eats up about a third of the budget.
If I could simply throw large amounts of polys and objects at Blender (which appears to be possible with Clarisse) I could save 30%.

Do you know that you can rent Clarisse for a month?
I have no idea who you working for and if you fall under the restriction that they have for Indies, but at 60 bucks per month this sounds like a really good deal.
https://www.isotropix.com/shop/indies

Do you know that you can rent Clarisse for a month?
I have no idea who you working for and if you fall under the restriction that they have for Indies, but at 60 bucks per month this sounds like a really good deal.

Very intriguing. I´m a freelancer, so I guess this license should be fine for me.
I’m currently improving my Unreal Engine skills in my free time… must resist urge to get distrac… AAAAAAAHH!!!

Sorry for distracting you, but I am just total in Love with Clarisse and I can’t help but sing songs to praise her whenever possible.
A couple of weeks learning and playing around did it for me and since there is a free learning version there is really no reason not to have a look if (you have the time).
The only downside are the hardware requirements for rendering. You better have a beefy machine.
But they are also working on a GPU renderer, which will be released soon.
If you have a machine and a brain that can deal with UE5, then you have everything you need for Clarisse.
Its actually a pretty easy program to start with.

True, Clarisse is simply made for artists to take their mind off of limits (like scene budget. memory consumption ,optimizations…) and just devote themselves to visual creation.

Keep in mind though that Clarisse at its core is a scene assembly app with a powerful render engine, so you will have a fair amount of I/O work as the app. does not have a modeler.

Last I checked, Clarisse came onto the scene with what might have been the most powerful instancing system in the industry, and perhaps had one of the first unlimited detail render engines available to consumers. It is definitely not something FOSS can provide right now (at least Blender probably can’t do it without a major refactoring of the core).

The core of it is a deferred loading system identical to what USD brings to the table. The only thing that makes it different to Katana and Houdini Solaris is the fact that its renderer is build into the viewport and is able to do everything that a normal viewport is doing, except that it is a raytracer not based on OpenGL. Of course there are tons of other tools and workflows build around it, but essentially its not that different from its competitors.
The biggest step A FOSS software has to do is adapt Pixars USD and build on top of it.
For Blender I don’t think there is a huge core overhaul necessary, because USD IS the core.
It needs to be implement fully, with a node based editor that can be used for scene description, then you can cache out all your animations into Alembic and static meshes into USD and load everything via the USD scene description.
Are there any news about Pixars or AMD’s work on USD?
AFAIK both companies are working on that.
The only other dependency needed to interact with USD is an an Hydra render delegate, which Renderman already is, ProRender will be, and I remember there where some plans from Tangent Animation to turn Cycles into it too. I remember reading something about an early prototype for Houdini, if my memory doesn’t fail me.

If Clarisse has no GPU renderer at this time how fast does it render? How does rendering Speed compare to GPU Cycles?