This is the rendered version of my previous Finished Project Thread. Hope You like it… This is my first model which I’ve modeled,rendered and composited from a concept art. I ve been learning blender for 1 year. Hope you like this gun. 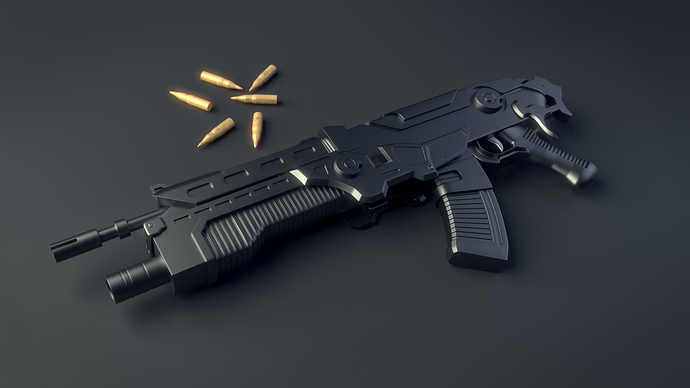 If it is a laser gun then why does it have bullets?

That aside, it is not a bad render. I think that there is a bit too much glare and I would like to see some textures and different materials. The modelling looks solid.

it looks a bit like plastic, so i would use wardlso, but yeah nicely modeled

looks great, the bullets are confusing but id say you made a AK-Lu

But there are some obvious things wrong with the design, even still. For one it doesn’t look like an energy weapon at all. The barrel and muzzle are obviously designed to fire kinetic projectiles. Also, that under-barrel grenade launcher (I’m assuming that’s what it is, anyway) doesn’t look wide enough to accommodate a grenade. Plus, it has no visible trigger mechanism or way of ejecting spent grenade shells.

Thanx guys, I will try to improve it…

I think it’s awesome! Way better than what I’ve done, I don’t know the first thing about texturing myself, it’s killing me.

I disagree with Zokk on a couple of things. It is a concept weapon isn’t it? So who’s to say that’s not in fact an underbarrel mounted laser? And if it is a grenade launcher who’s to say what’s big enough or not big enough to accommodate a grenade? It’s not supposed to be an M16 with M203 is it? They do in fact make 20mm grenades half the diameter of the 40mm ones we usually see in movies. And, it’s a concept weapon, the grenade can be however big you say it is, based on whatever technology you can make up, for whatever reason you decide. The M40A1 Carbine from the Aliens movies used an actual shotgun as a “grenade launcher” complete with 12 gauge grenade props. And whatdayaknow? That’s an actual thing now too! 12 guage frag rounds.

That said though you did model rounds and the upper barrel has a muzzle break on it which actually is something that would be unique to a “traditional” chemical propellant powered physical projectile type of weapon. So that seems a little confusing.

But the detail of the model is great! And for a cover all working texture I think that looks pretty good. But yeah, for a final version make a couple more textures for different parts. The body and magazine are fine being a single composite. But the barrels should probably be metal, and maybe throw in some accents or something.

Really good though. I’ve been learning Blender for about half a year now and my models nowhere near as good, and I’ve kind of stalled out on it. I’m not sure it’ll ever really get to a point like yours and textures continue to frighten me.

I don’t know much about weapons but the modeling is really really amazing. I could see this being used in a futuristic scene. You did say that this was a futuristic gun, right? I like it a lot. It keeps an element of realism (like you could convince me that weapons will look that in another 500 years easy) while still having a sci-fi flare to it.

First things I noticed, there is no stock, RAS rail, back part of the iron sights, mag release, or safety. Also, that sharp thing in the back looks like it would get in the way. The good thing is, it appears the center of balance is right in the middle, if you hold it correctly. Bevels also look pretty clean. Its good modeling overall, except the handle looks a bit blocky, was it supposed to be that way?