Hi,
I’ve been dabbling in blender for a while now (an hour or two every couple of months if I get bored with other things) having not really had much of an idea what to create with it. Now, however, I have decided to have a brainwave and create a boat simulator.
The boat will be based on something I use regularly as part of Surf Rescue Operations on the UKs east coast. This is a small (4.2m) inflatable craft called an Arancia. It is used within 500m of shore so well within breaking waves etc.
As you can see in the screen shot below I have created the basic boat design. Sorry if the following questions seem really obvious, I have used the manual and tutorials as best I can but there are a few things im still unsure of:

This project is only for me as a bit of amusement and “can i do it?” test. The appearance doesnt have to be perfect (as you can see for the dodgy looking boat) so anything which works would be beneficial. Thanks
Alistair 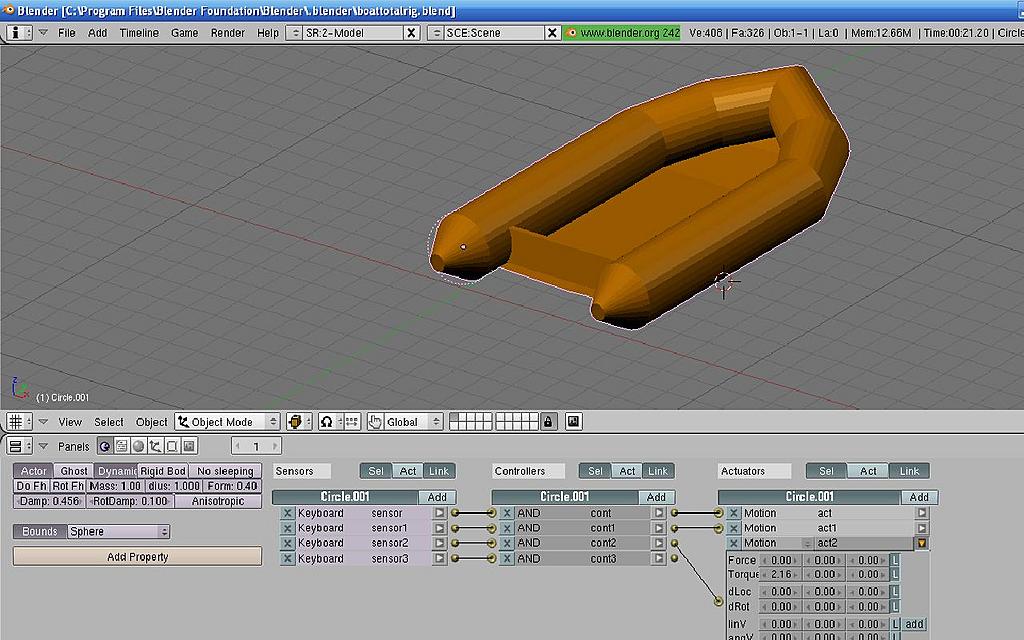 2.Not sure, but maybe its easy to find which field
to alter if you set object axiz of the boat visible.
And display the boat as wireframe. Its third from Drot. X, Y, Z

3.You could do waves starting with grid primitive
and then apply wave modifier to it.

Thanks alot of the information j.
On searching I found the following as a result for Wave Modifier which is exactly what I wanted.
http://www.cogfilms.com/tutorials.html
The only possible thing that is missing is making breaking waves similar to a beach enviroment (so the crest comes over the base of the wave and spills down the front.)
Anyway of doing this?
And I’m still looking for detailed information on using the game engine if there is any.
Thanks
Alistair

hi again
just few things to mention. Convex hull polytope
for bounds in the game engine is good for simulating
the boat colliding with waves.
cog´s ocean sure is nice but lets say you go for
such look, you would have to bake the result, that
is convert renders to a texture map possibly using a
script and even so result would likely be too heavy
to use in the game engine, it would not play real smooth.
To get some motion for waves, you want to perhaps
use the ipo actuator and have a looping mesh deformation
where shape of mesh in frame 1 equals the shape of mesh in
frame 300 for example, not sure though.