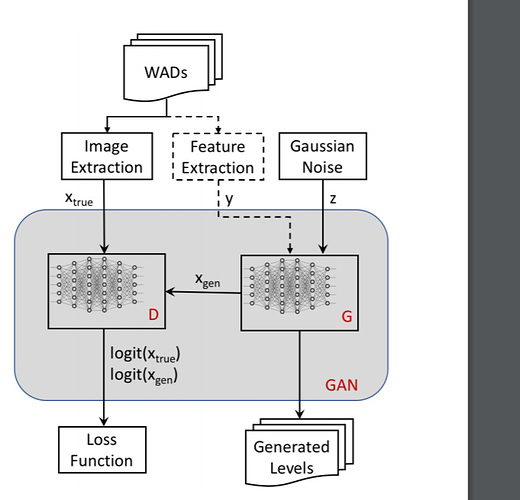 How long till we can generate random games completely?

adjust the game with voice commands and regenerate?

I like this game Idea but the level needs to be more vertical with more bridges etc.

i think this is really cool.

Not long, like a year or two. GANs are so insanely awesome.

How long till we can generate random games completely?

Daggerfall had randomly generated dungeons. Had to , since there were probably millions of them. Not very good ones though I have to admit.

The hype on game design last years has been the procedural aproach for generatin the huge natural and urban enviroments. this idea could be useful for that.

The machine used 1088 level maps to learn this. It is a great accomplishment, but it is nowhere near randomly generated games. It is not even close to learning level map generation on its own without heavily engineered inputs. Sorry, but what you are writing is very misleading!

I didn’t actually read any of the papers here, but lstms have been creating side scroller levels for years, turning it into a gan seems pretty trivial. Keep in mind they are generating a coded representation of the scene elements, not pixels.

Let’s just be very clear for everyone first of all: This is far away from the suggested claims made in the original post or the clickbait title.

I agree that turning it into a generative adversarial network is a trivial idea. It has the advantage that you can play with the random input, so there is quite some value in this approach.
There is still no guarantee that the generated levels even make sense for the game. You don’t know whether the data was sufficient to teach the neural network that levels need to be balanced and all the other central topics that matter in level design. In my opinion, it is highly likely that this sort of solutions turn into tools for level designers within a few years. But we are still far away even from that!

Ok, I had read that paper awhile ago. Your argument against it being that the levels may not be balanced or make sense is kind of thin. The generated levels will tend to be as balanced or sensical as the input data levels. Because of back propogation on the generator in the stacked, but frozen discriminator, bizarre combinations in the z vector will be penalized such that generated, non sensical levels will have higher gradients. I just don’t see how video game are any different from images or audio, GANs make short work of them all.

The results from GANs are still not indistinguishable from the training data. They are in many cases very close, but they are not yet there. This small gap makes a huge difference. Because of this, there is no guarantee that as mentioned, the levels are going to balanced and so on. Of course as you mentioned, they tend to be, but this sort of details can make or break the levels.
On the practical side, this kind of solution has pretty much no value at the moment. There are basically no games which have this amount of levels, such that new ones could be generated by neural networks. For game designers, this would be useful when the game is being developed. But at this point, there aren’t going to be enough levels as training data. Even most released games don’t have enough levels for tasks like this one.

There is a significant amount of work that needs to be done to make this sort of solution viable for practical purposes. It is one of many steps that has to be done to get this kind of tools. But it is miles away from being usable.

You’re thinking about the design workflow much differently than I am. You’re seeing it as a tool for game devs to produce a static game. I see it as a parameter for the user. As in the user says (with voice) , “make me a level with a bunch of waterfalls and rainbows, and play some cheerful music.” It’s custom on demand entertainment. Further down the line, it’s "show me a movie kind of like Goodfellas but with marilynn monroe as karen, score by mozart "

As for the having no value at the moment, this stuff is improving quickly. a couple years ago it was classifying cats and dogs, today it’s driving 18 wheelers.

I am mentioning the game development aspect because this is the simpler use case and as such it is the one that is more likely to be used at first.

To make it clear again, my comments are especially meant to put the initial question into perspective. Asking how long until we get randomly generated games based on the results of this paper is way out of proportion. The problem of generating levels in practice has not even closely been solved.