I am testing GN and learning… In 3.0 I am trying to spread two or more different meshes onto the vertices of a curve. As you can see on my screen shot I can get the meshes on vertices but they all occupy the same vertice. I want each mesh being placed on a separate vertices. I am looking for a node that allows me to manage locations for each mesh… or something like that… I looked at 3.1 but could not find a solution there… I am sure it is somewhere but I may not name the proper node for that… 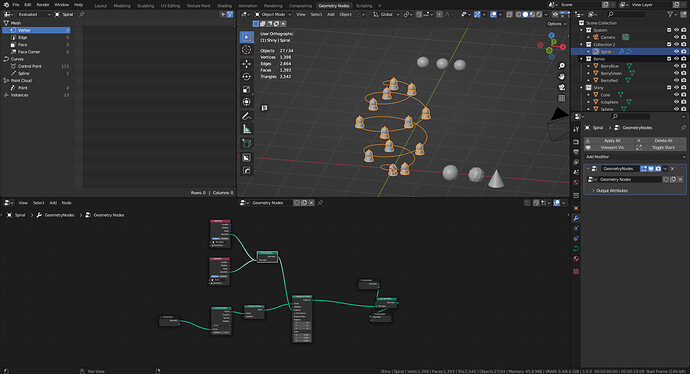 Well ! Dealing with curves I get many questions

First I wanted to know the length of a Bezier curve. I found two nodes providing a ‘length’ parameter The resample node and the Curve length node. The Resample Curve node provide a ‘length’ parameter for a Curve slot. How can I ‘see’ or view the output of the ‘Curve’ slot? I tried the viewer but it does not accept the type of data…
I tried to use the Curve length node with a length slot but how can I see what value is provided there? Now maybe I have to get the value in another node but could not find out which one? My second question is how do I count the number of vertices on a Bezier curve? and how do I pipe it in a count node to be able to use an iteration for counting vertices…

To know Curve Length, you need to plug Spline Length node into Value socket of Viewer node and curve geometry, you want to inspect, into Geometry socket of same Viewer.