Hey everyone, just trying to figure out how if there’s a way to copy the values of one mapping node to another, and then secondly, if I can only copy say the rotation of another mapping node, but not the location and scale.

Basically, how do I control the individual inputs and outputs of mapping nodes, if it is possible. Is there a way to add custom sockets for just these values instead of one “Vector” input and output for all the values? That would solve my problem. Thanks!

Here is one I setup based on thistalk by Bartek Skorupa (highly recommended): 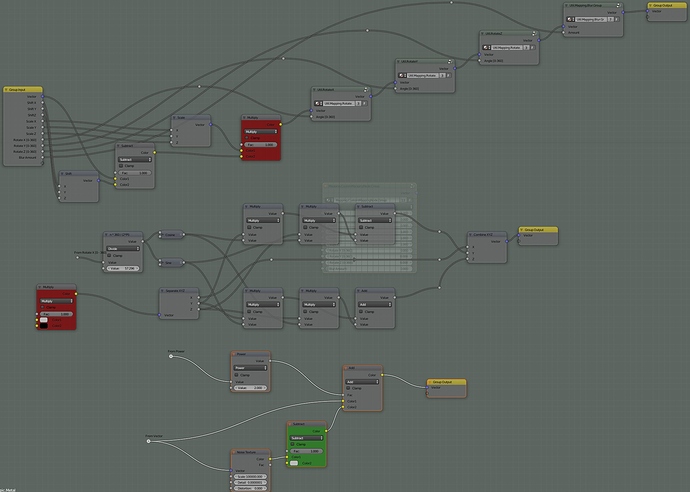 The top is the actual node and group organization, using some groups inside that whose contents are shown below.
Only showing one of the rotation nodes, but the principle is the same. The red node in the middle section indicates where it comes from when it enters rotation x.
The bottom section is just the “blur” node, and the “grey” value in the green subtract node is a value of 0.5 in all channels (ref the video) to prevent offsetting from the “blur”.
This way you can use one of the rotation node groups with ease to control environment map rotation. VERY annoyed how these controls are not exposed as node inputs in the original mapping node (although blur probably don’t really belong here).

If you want to rotate in 0-2pi or 0-1 range, you need to edit the math. I made this before figuring out you can plug in a bump map strength node to the input socket to get much better slider behavior, so I made it use 0-360° instead.

I’m a Noob…Can You explain a little more about what You want’ to do…Why did You only need Eg…Rotation…?

You can alway’s use Ctrl - c To copy and Ctrl - v To paste …If You wan’t to copy all value from Mapping node to another the easy way is
Shift - d Copy the Node.