I have been wanting to model a cannon for a while and I finally decided to do it after a recent trip and tour of the battlefield of Gettysburg, Pa. After modeling the cannon I decided to put it in a scene. The atmosphere is inspired by the foggy, mizzley weather the day I toured the battlefield. The flag is (as far as I could find) the US (Union) flag of the time period of the battle of Gettysburg. Though I believe that many of the various regiments had their own versions of the Stars and Stripes.

Though I am basically finished I would love some comments and constructive criticism. 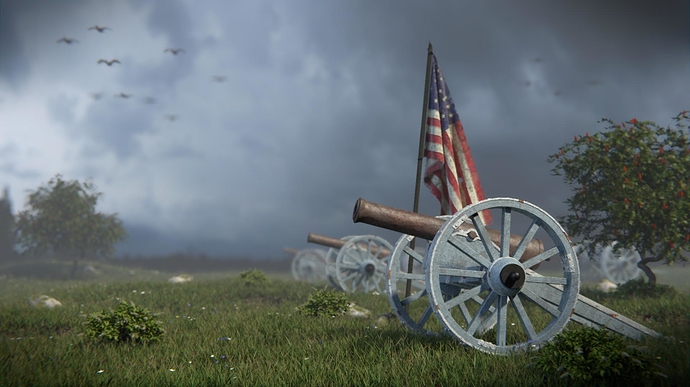 (Both the mist and DoF are done in the compositor.)

I definitely like it. Here are some of my thoughts… I feel that the flagpole is a bit short compared with the cannons. But again, this could be caused by the size of the tree in the right. Work with the scales… See what could be better. As for the DoF, I like the effect, but I want to see some of the birds up there a bit more sharper because I don’t recall seeing birds that blurry up close. The cannon behind the tree doesn’t really belong there… But other than that, you’ve done an impressive job! I’m especially impressed with the environment you were able to pull out. Great job!

Thanks a lot for the comments! I will definitely keep the scaling issues in mind for future projects.

The “cannon behind the tree” is actually a limber, the thing used to tow the cannon with horses and store the ammunition. I kind of figured not many people would get that, a bad result of my historian side overruling my artist side.