It’s been a while since I last created a post on BA how to theme Gimp to look like Photoshop CS6 for Ubuntu/Linux – essentially a dark theme with customised icons and layout. I checked the other day and to my surprise since 2013 there has been over 20,000 downloads for it! This suggests to me that maybe it’s been popular – go figure? Gimp devs please finally take note

At the time a lot of people were hoping to theme their Window versions with the same method, but although it was possible, some parts of the theme didn’t work well. I’ve since found out that it’s something to do with the GTK engine in the Windows version missing some dlls.

Luckily I’ve now found a fix, and it’s even better than the original theme!

A developer named ‘Partha Bagchi’ has created a build of Gimp that has the required GTK dlls that allows Gimp to be themed correctly. He has also done builds for Inkscape too, which if you’re interested, will help sort that too while we’re at it.

Another artist/dev ‘migf1’ has created a set of icons to replace the default ones, better than my originals I think.

Here’s a screenshot of Gimp with Parthas Gimp with the cleerlooks-flat icons Dark Blue from migf1: 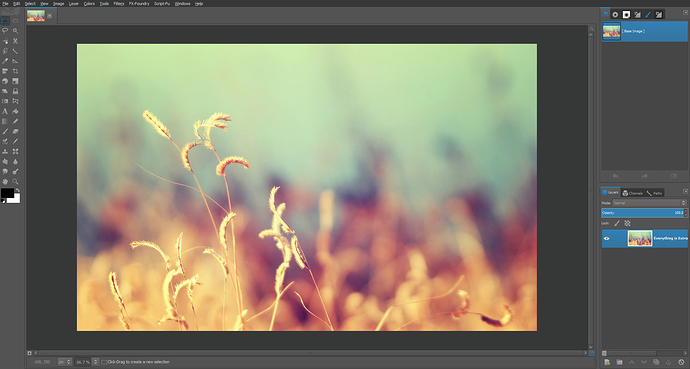 The cleerlooks theme also has other variations both dark and light which you can check out.

For Inkscape I’ve added my own grey icons to help match the theme, here’s the screenshot: 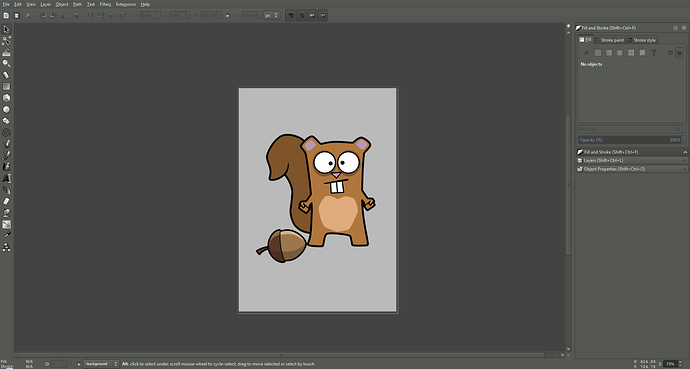 Good too I think.

For Gimp I’ve also added my own Splash as it’s easy to do: 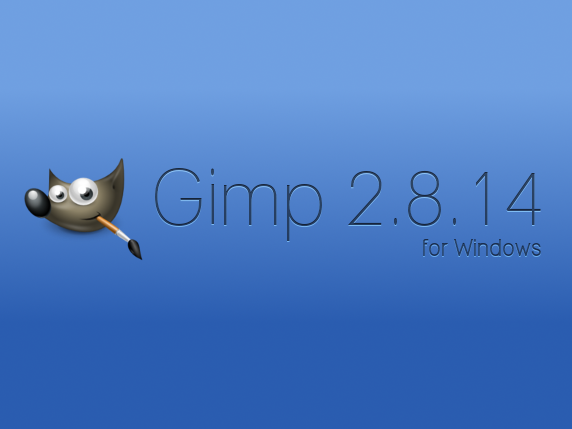 I’ve included a the links for all or the above and I’ve also backed up the Gimp icon theme just in case it disappears – I’m sure migf1 won’t mind. In my download, I’ve also included the replacement Splash for Gimp and the icons for Inkscape plus this guide here as a PDF for reading offline. 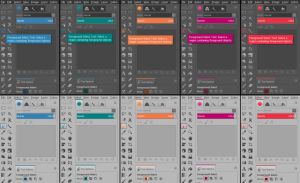 NOTE: Greek readers may want to read the description that follows in their native language, by visiting the relative threads either at ubuntu-gr.org or at insomnia.gr (follow either of those links)...

This Guide as a PDF:

Of course I can’t guarantee the future of these links, mine will at least be around for another few years – hopefully then we’ll have a new Gimp and Inkscape with dark themes and better layouts.

1) Download and install Parthas Gimp. It will create a separate folder titled “Gimp-2.8” and should leave the original Gimp 2 install folder alone if you have it. Although there’s no harm in backing up if you think it’s necessary.

2) Next download and copy the cleerlooks flat icons to
C:\Program Files\Gimp-2.8\share\gimp\2.0 hemes.

3) If you wish to change the Splash screen on Gimp launch, download mine, or create your own and copy it here C:\Program Files\Gimp-2.8\share\gimp\2.0\images. Rename the old Splash to “gimp-splash-old.png” and title your replacement “gimp-splash.png”.

5) And again if you haven’t previously, re-arange the layout of the docks to suit.

Tips:
Don’t forget you can re-arrange the tools order and also omit the ones you don’t require.

You can lock the dock tabs in place by right-clicking the arrow icon on the top right of the docks and selecting “Lock Tab to Docks”.

Check out the extra Filters and scripts Script-Fu and FX-Foundry – a quick google search to locate.

If you hate selecting the wrong layer ever time you want to move something, check the option
“Move Active Layer” from the Tool Options Tab when the Move tool is selected.

To float the selected selection like in Photoshop i.e. where the marquee shrinks to the selection – press “SHIFT+CTRL+L”.

1) Download and install Inkscape from Parthas’s site. Backup if necessarily as for Gimp (I don’t know whether the folder is the same as the official – it installs as “Inkscape-0.91”). But at the same time if it is the same folder, it’ll probably leave other files you’ve added alone – but just take care.

2) Next, if you wish to use my grey icon theme, download it, and copy and replace the icon set in
C:\Program Files\Inkscape-0.91\share\inkscape\icons. You can obviously re-name the old file if you wish to keep it. I set mine to small for my laptop and normal/large for my desktop.

3) launch Inkscape and re-arrange the layout to suit.

Tip:
I don’t like a white canvas around the document – it’s hard on my eyes, so I while working on something I change the documents background colour to a darker grey. File>Document Properties>Background Color.

Then I create a layer for a white background, lock it and then create a foreground layer which is the one I begin working on.

You can speed this process up simply by creating this as a template and saving it and replacing the default one at C:\Program Files\Inkscape-0.91\share\inkscape emplates emplate.svg

Artists/Designers,Developers etc use Gimp and Inkscape for a lot of hours, that’s a lot of eye-strain for us. I really hope the devs of both of these excellent pieces software see how darker themes can help. Other devs are seeing the light (or dark) now, even Kirta has has this sorted for ages.

On Gimp though, the layout is terrible, just a little re-arranging and it’s 90% better straight away. But I think that it’s so off-putting for anyone new or used to any other photo/graphics/painting software, not just Photoshop.

Are you using a dark system theme to get Inkscape to look like that, or is it a gtk configuration file that’s responsible? If it’s a gtk conf file, I’d love a link to it

ohsnaptitsjoel, It’s all in the instructions, it’s part of Parthas inkscape, It can probably be extracted. Just download it and see.

Thanks so much. My GIMP and Inkscape look much better now :D.

Love this. Should be in both GIMP and Inkscape as default first run choice. The programs are incredible even compared to commercial software but these little flaws are hindering them from gaining a larger user base.

Love this. Should be in both GIMP and Inkscape as default first run choice.

But I wonder when that will be?

it’s based on latest GIMP dark theme, check it out! 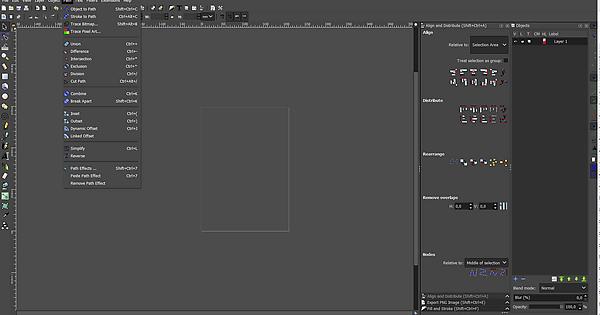