I’ve made a Giraffe material although I’m not very experienced with material nodes. I need to find a way to make the pattern rounder ? 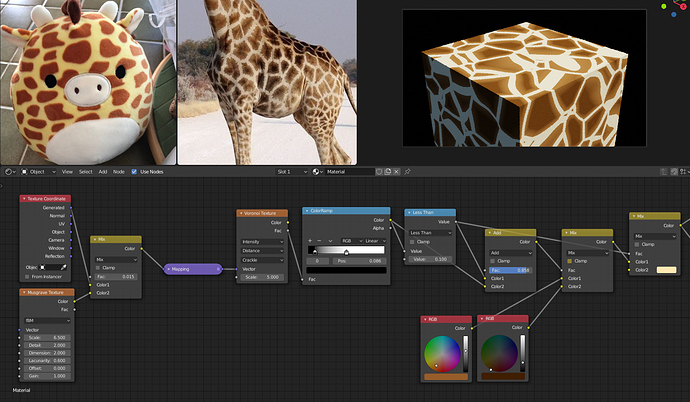 This is cool, and it’s impressive that you’ve made it without any Image Texture nodes. To be honest, I think your optimal roundness would come from making an alpha texture with spots and not spots and plugging that in instead of the Musgrave. If you really want to keep it procedural, you could put a second Musgrave with sightly different settings in. Mix the two Musgraves together, using one or the other of the Musgraves for mix, and you should get something with softer edges.

I’m not promising this will work, but it might.

“Ummm… as for me, I think it’s damned impressive that the OP did this entirely without images!”

And – the texture already looks “very plausible.” Could you “sell the shot™” with this? Yes, I think so.

Your enthusiasm is echoed by me, you just express it better

it is truly remarkable! I agree, I don’t think you HAVE to change anything about this. 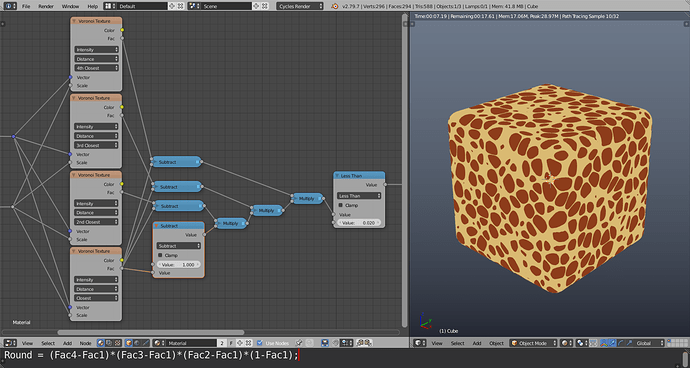 Thanks for the replies & suggestions guys, very helpful. Secrop that’s exactly what I’m looking for.

Just want to extend on this … Is there any way to get slight variation of spots color ?

I know it’s not Substance Designer but sure comes close quite frequently.

You can do this with a voronoi texture set to ‘cells’ fed through a color ramp. 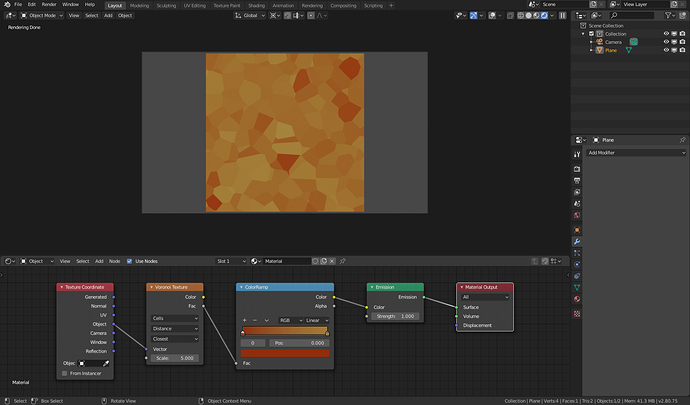 Just to adapt/complete @PyBlend’s answer to the node setup I posted, you just need to keep the same vector and the same scale as the others F[1-4] nodes.

I’m not sure what you mean. I tried with Voronoi as cells instead of Intensity but doesn’t look right.

I’m not sure what you mean.

I mean to mix my setup with PyBlend’s setup (keeping the same vector and scale to all voronoi nodes)… something like this: 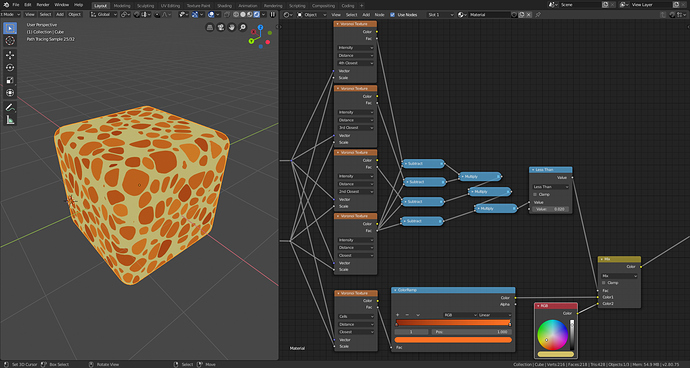 I’m unable to try, but I think such a material will be far easier (less nodes/generators) using the 2.81 beta and its highly updated voronoi generator.

I already mention this to Omar… This equation requires the tetrahedral corner of each feature point, so we need F1, F2, F3 and F4… but in the latest builds we only have F1 and F2. Probably because most people just don’t use or don’t know how to use F3 and F4 (and having them requires some extra steps to sort them).

I see, thanks Secrop. Just masks it.

What is to the left- the inputs for the four Voronoi? and how did you add that function? Sorry to be a noob, you’re just doing things with nodes I’ve never seen before

I see, thanks Secrop. Just masks it.

What is to the left- the inputs for the four Voronoi?

A coordinate system (in this case, the ‘Object’ vector from the TextureCoordinates node), and a Value node with some value for the scale.
It’s basically what you would normally plug in if you just had 1 node, but done this way so if you want to change, say, the scale, you do it in just one place.

and how did you add that function?