Starting work on a new character, I’m gonna try to document the work I do on her here. Looking for feedback on shapes and anatomy!

Please always add the #nsfw tag to posts like this.

thanks Bart, was looking for the rules on that but couldn’t find it.

just having some fun tightening and detailing her face: didn’t have a whole lot of time this weekend, but I started painting out an initial face texture. 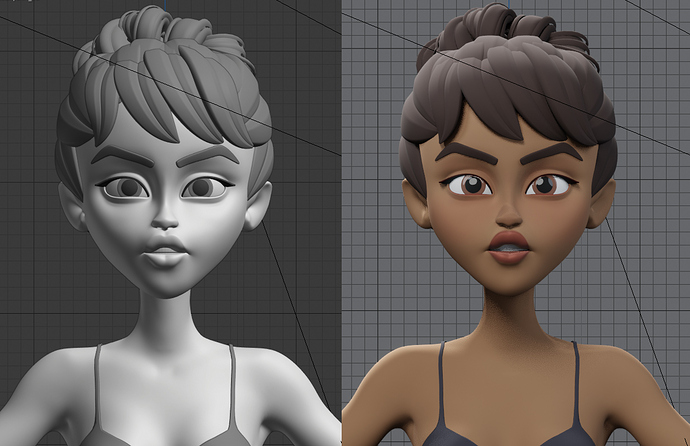 the next big thing to work out is her hands, I was not satisfied with the hands of my last character and I want to spend a little more energy working this characters hands to a level I’m satisfied with! 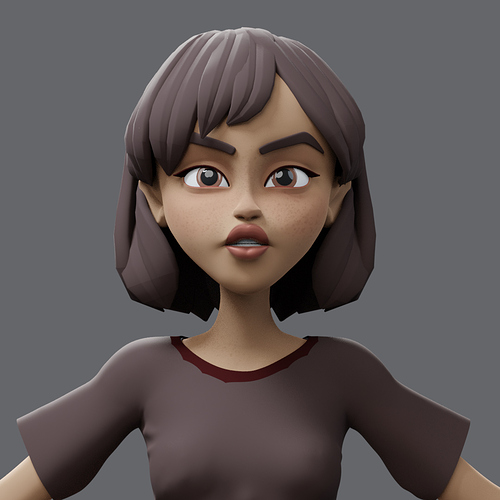 cheers, I appreciate it mate! Hope it helped in some way… if you have any questions shoot me a message on insta or twitter! I’m always happy to help.

I haven’t kept this thread updated because it didn’t get a lot of interest, so I’ve been posting primarily on insta and twitter. I’d be happy to keep this thread alive though, I’m still working on this character often.

I’ve been focusing on nailing the facial shapes. I want to make sure that I hit that appeal nicely. 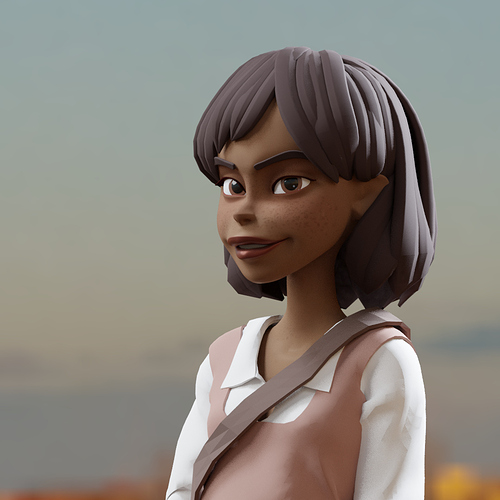 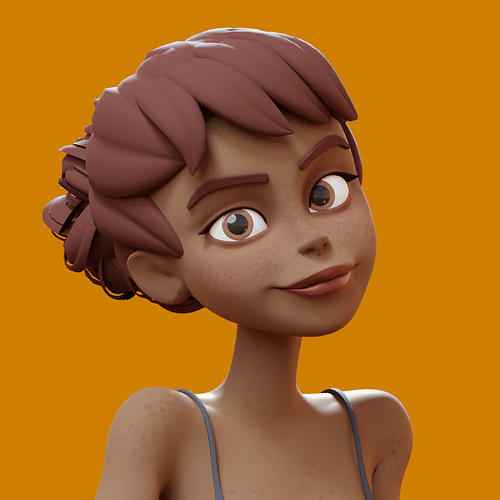 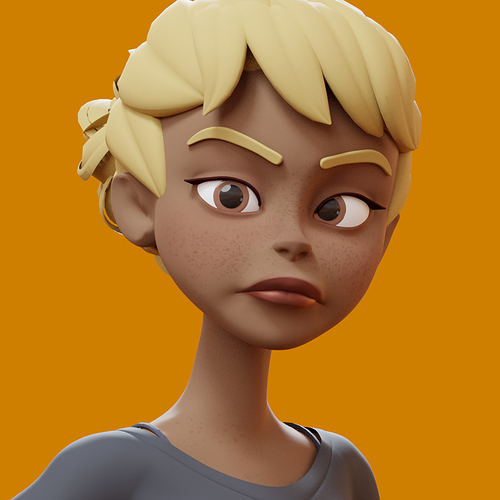 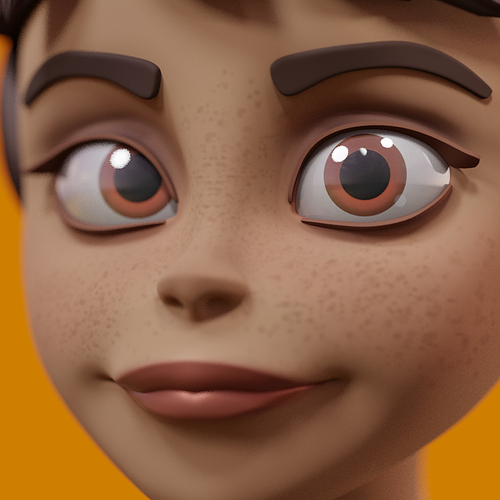 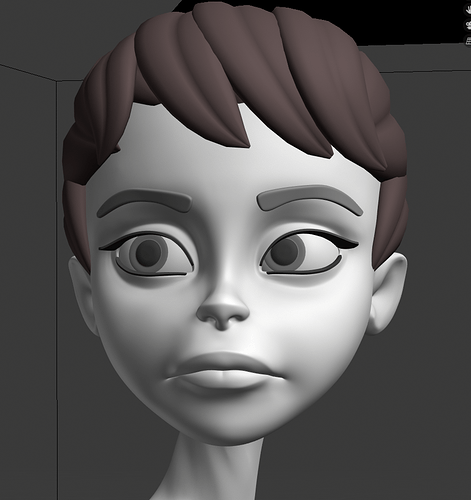 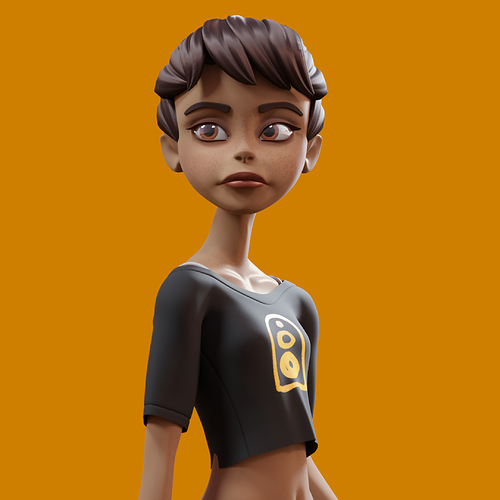 I’m not sure exactly where I want to take this character tho. I had originally wanted to make her a sword warrior 'cuz I want to do some animation with a character like that, but I’m struggling finding a compelling backstory/design/outfit. Let me know if you have any ideas!

Also, not sure I feel like this whole thread is nsfw just because of the basemesh. Is there a way to just make individual posts nsfw?

i really like the character, it has a different styling then usual animation. @philo_vivero cheers mate, I think it’s mostly my responsibility, I intended to make this a little more informative in terms of my process and thought, but I wasn’t able to do that as I hoped.

In the meantime, I’ll continue to throw up images here… if anything piques your interest, or if you have any questions feel free to reach out! I’d be happy to help.

About the hair, can I ask are you still using the curve method you did before (IIRC)? I’m wondering how you could make that sort of hair game ready; I know you can convert the curves to a mesh, but for me that sometimes results in something pretty poly heavy. The way I thought about doing it was retopologizing the hair, but I’m wondering if you could reduce the poly count without that, and not lose too much detail in the process. I really like the results you get with your hair, and I’d like to try something similar.

That being said, I really like the freckles and eyes.

I try to avoid simulation as much as I can. I’ve found it to not give appealing results… most of the time you need to design the shapes for maximum tastiness.

My technique probably would be to design the long hair in the way that I would want it to be, and then probably make a bounding mesh w/ softbody physics (using mesh deform or surface deform), to get that last 10% of simulation for collisions and stuff.

I use mesh deform + surface deform + shrinkwrap a lot! those are good tools. Combined with the solidify modifier, that’s most of my clothing, haha.

As far as eyelashes go, I’m currently using particle hair for the eyelashes. It was the only way I could easily get the nice clumping. There’s a thin mesh that runs around the eyes that the hair particles are on… with some nice combing and some child particles, it’s worked out well for me so far. I’m a little worried about it falling apart with serious deformation, but we’ll see.

I’d also try doing eyelashes just on a flat plane w/ painted eyelashes. I think for the majority of situations, that would hold up.

@Minkmetrodon thanks mate! yeah, curves are easy to use, so I continue to use them for hair. They’re honestly not suuuuper great for game engines, but that being said there are definitely some controls to make them much less high poly.

In curve settings there is a resolution multiplier. I think default it’s set to 12, which is reaaally high resolution. I drop that down for viewport performance most of the time anyway. Don’t forget to drop the resolution on the bevel curve object as well!

not much of an update other than that. Trying out some different colors/clothes, but nothing really sticking yet. I like very much the style of this character, specially on these last shots. It’s a fresh look that surely would work great on an animation movie. Fells that one can easily portrait any emotion with her.
You have an overhaul great work and the only reason I haven’t made any comment previously was because I didn’t notice this topic until now

I too consider that there is no reason for the mature filter, except for the very first post. So this is very misleading and gives the impression that the entire topic is naked dolls which ain’t the case anymore.
Has an idea, you hide that image with one of this things (the gear icon on top):

And place one of the most recent images on top. This will bring to this awesome work the deserved attention for sure

While that is a good idea, the topic would still require the NSFW tag. Technically I can’t make it work on individual posts, but only on the entire topic. A better solution would be to start a second, non-nsfw topic.

Thanks for the reply! \o/

She is really cute, congrats!