I’m preparing to teach an Intro to Blender program at my local library, and I’ve run into a rather nasty issue (in 2.75 and older versions). Part of the class will be focusing on a small project–namely, the creation of a glass goblet. However, the Glass BSDF is acting pretty crazy. It’s almost as if the it’s using a fresnel effect, in which is places pure gloss near the edges, and glass near the visible center. The strange part is that it doesn’t do this on a basic sphere, or any other basic object–but does on a goblet-shaped object formed from either a cylinder or a circle (but strangely enough, it doesn’t create this effect on a goblet formed from a sphere). The really odd part is that if I create the interior lining of the cup manually, the effect is still there. But if I create the outer shell by itself and use a solidify modifier the effect disappears–but there’s no refraction. Maybe there’s something I’m missing, but this problem wasn’t around last time I needed a goblet, and I can’t think of any reason glossy material would be showing up as a fresnel effect in glass. 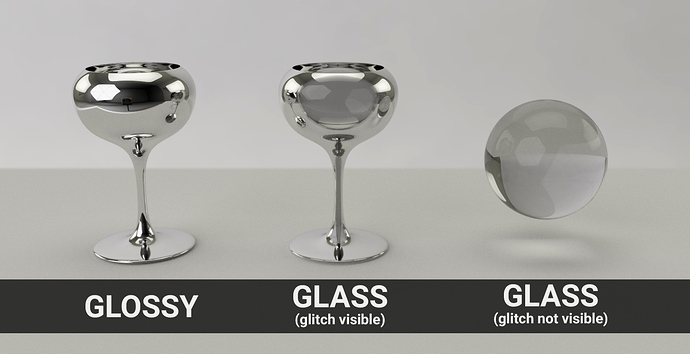 Flipped normals on the mesh.
BTW, does that mesh have thickness (especially the top part)? Never use refractive shaders on objects that are physically implausible.

Flipped normals on the mesh.
BTW, does that mesh have thickness (especially the top part)? Never use refractive shaders on objects that are physically implausible.

Ah, many thanks, the normals were indeed flipped (and yeah, it did have thickness). =)