In my rendered image of a glass,the top of the rim turns black.
Tried changing the IQR value up\down. No luck though.
Any suggestions would be appreciated.

use a mix of glass and transp mat in cycles

In my rendered image of a glass,the top of the rim turns black.

Show us, don’t be shy to post a screenshot or to upload the file for us to have a look.
What kind of environment do you use: This could just be a reflected/refracted part of the world around the glass object. 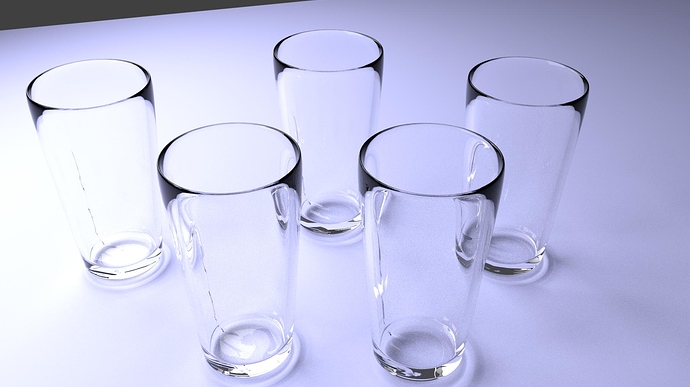 Check your settings under Render > Light Paths:
I guess you’re using too few glossy bounces. The rays get “caught” between the reflective outer and inner surfaces of the glass. They jump back and forth and are simply terminated when the maximum number of bounces is reached (the total number of bounces might have to be increased accordingly).

Another thing to check. With glass and glossy surfaces you need something to reflect/refract. Looking at your image you have a relatively plain grey background which won’t help.

Should it matter? If 100% white is used, it should end up either reflecting or refracting that same grey rather than going black. Shouldn’t be any absorption based energy loss. A nice scene would make it prettier, but not a requirement to achieve expected results. Apparently caustics is enabled, so I’m guessing no fake cheats are used, in which case all bets are off wrt what will happen

I’m tending towards issue happening due to ray depth termination, clamping to cause energy loss, or caustics sampling to eventually not produce enough brightness (but not going all the way to black).

If the node setup is something else than a simple white glass shader, it would be helpful to know what. Same for render settings.

Is there any way of telling Cycles what to do on ray termination? Preferably what happens after n bounces within material, making it look the same if seen through several layers of thin glass objects. I’m guessing ray depth and acting upon that, maybe a camera visible only emission reflection ray to same as environment?

Btw, is the glass shader physically correct? Especially the color input. It don’t strike me as physically plausible to have colored glass (dielectric material) with fully tinted edge color.