We would like to present you the Golem Project – a decentralised market for computing power. We are in the early alpha phase, focused on fine-tuning our first use case, which is CGI rendering in Blender.

You can use Golem to rent your computer when you do not need all its potential and to buy computing power whenever you need more. All transactions are direct transactions between users. Golem is somehow similar to Sheep it Render Farm, but there is a market for computing power behind it, with all price setting and competition mechanisms and Golem can be used for any computing, not just Blender rendering (ultimately, at the moment it is just Blender and LuxRenderer).

We are ready now for test with users and for scaling up our testnet. We kindly invite you to join our test: as early adopters you might have a head start with Golem, plus there are dozens of nodes in the network already, ready to crunch your renders. Rendering on testnet is free – we use a test transaction system, but tokens are of no value.
If you are interested in joining, please e-mail us to [email protected]. You may learn more about the project on our webpage and blog. You may also join us on slack. And you will find test & installation instructions here.

Hi! First I want to say congrats to at least having brought this project live. It’s very promising but there are a lot of struggling you will have to go through to make it viable I guess.

So no answer since 2 years? I wonder why no one seems interested in this project, it’s very interesting. I am reading the doc and watching tutorials to test it soon. I think the crypto (and speculators) community is more aware of this project than the CG artists community. But you need to attract both to make it work.

Are you getting more requesters now or still a lot more providers on the Golem network?

I tested Rendering with Golem - promising to be 10x faster than renderfarms. Here my results: 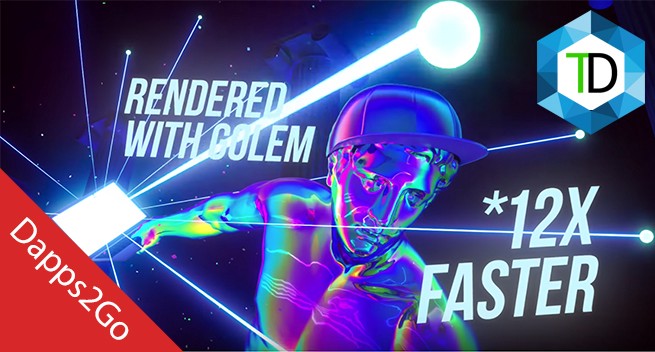 In our new series “Dapps2Go” we are testing Dapps which are already usable. Enjoy!


here is a video about the project and how to install the client.
If I wasn’t a beginner in blender, I certainly would have rendered something with it a long time ago. Unfortunately, however, I have not yet reached that stage. What do the professionals think of this? I would be interested.
morritzio (morritzio) February 23, 2019, 3:11pm #5

Downloaded this today to test it out as it looks like an interesting technology. Especially if it branches out in future beyond rendering to also include simulations. Sims are single threaded I know, so not entirely suited to distributed computing like this… but accessing a node in the network more powerful than your own machine is exactly that. More power.

Anyway my 2 cents at this point is that it’s way too complex for the average 3d artist (and we’re generally pretty technical people!).

Firstly Golem are making the assumption you own some variant of Bit Coin. You can’t purchase their variant - Golem’s - through the downloaded application or indeed via Golem’s website though… You have to purchase another coin called ethereum elsewhere and convert those coins to golem’s? Only then can you use the main net service and start rendering in production.

Huge mistake there guys! I’m a busy professional and I have zero intention of navigating the world of bitcoin wallets, coin offerings, ethereum blah blah blah. Give me the option to submit a job, set a maximum price in real currency and let the app do everything else on the back end. Make it beautifully simple like Pixel Plow and I guarantee you’ll attract users.

Secondly both your test net and main net had a total of just 10 nodes in them. You can hardly call that a huge amount of globally distributed computing power. I submitted a single frame render with a timeout setting of 20 minutes… It timed out and the frame didn’t get rendered.

So yeah it’s a great idea in principle and is awesome to see a genuinely useful application of the blockchain but it’s seriously lacking in terms of user friendliness. So you still have work to do if you want to see it adopted by the Blender community.